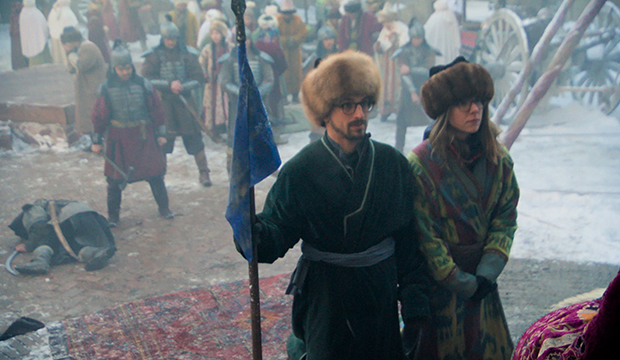 Leg 7 of “The Amazing Race 32” was anything but lucky for Leo Brown and Alana Folsom. The couple struggled counting spears at the Detour (damn those flags!) and then were yielded for 20 minutes by their pals Kaylynn and Haley, who were encouraged to do so by the other teams, spearheaded (pun fully intended) by Will and James.

But to hear them tell it, the Yield did not play a part at all in their elimination. Find out how far behind they were, why they’re not upset at Kaylynn and Haley, and what they think of the Mine Five alliance that no one else knew about during the “Race.”

Gold Derby: That was a tough way to go. What was it like watching the episode?
Alana: It was really bittersweet because you know how it’s going to end, and it’s also hard because, as with everything with the race, no one else knows.

Leo: It just felt like the end of a journey almost more than waiting for it to air. We have nothing more — very little — additional to hide from anyone. We obviously can’t say what happens out from here, but all our friends and family have been wondering for a while if we made it. … But seeing the preview for Kazakhstan and it was so cinematic and dramatic after that goofy Berlin leg, it was like, “This has a movie set, the lighting is beautiful, the music is sweeping, and then we’re gonna get eliminated!” [Laughs] I don’t know if anyone saw it that way, but obviously we knew what was coming, so it was an honor to be eliminated in Kazakhstan!

Gold Derby: Do you know how far behind you were?
Alana: I think we were about 45 minutes behind, so I know the yield didn’t affect it. We immediately asked Phil [Keoghan] if we hadn’t been yielded, what would’ve happened.

Leo: It wasn’t like we were out of it. All the other teams were at the yurts when we showed up … and we knew we were in a tough spot, but we knew there was hope at that point. Up until the end, we thought it was a possibility.

Leo: After the yurt, our hope was just that you never know, someone could get a bad cab.

Alana: We thought there was going to be a Roadblock at the meat market.

Leo: Oh, sure. Our real hope was that there’d be another challenge after the yurt, but once we realized the meat market challenge was so fast and it was just getting to the mat, you just hope that someone gets lost. That’s all you can do.

Gold Derby: You hoped you had the same luck that the blondes had in Paris.
Alana: Exactly! [Laughs]

Leo: Or in Berlin or in Asunción.

Gold Derby: Is it safe to say you think spending so long at the Detour was more fatal than getting yielded?
Alana: Oh, for sure, 100 percent.

Leo: The Yield was 0 percent why we got eliminated.

Alana: I think we just locked into a way of thinking and we couldn’t get out of it. Who knows — maybe if it had been warmer or we had more sleep or different circumstances, we would’ve thought about it differently. But we just couldn’t see those stupid flag things as anything besides spears.

Leo: For you to be successful, you not only have to read the clue, you have to know what to focus on, not to overthink it, what details matter. For example, we spent time in Bogotá straightening our flags. And I don’t think we needed to do that. Certainly, it wouldn’t have gotten checked out because that was just the wrong detail. We learned later that there’s a special name for spears with flags, which I still don’t know, but to someone who really knows their spears and their medieval, Central Asian battle weapons, I guess it was pretty obvious that the spears were spears and the flags with spears were not. But that was subject matter we didn’t have.

SEE ‘The Amazing Race’s’ Michelle and Victoria explain how they got so lost: ‘We were brain dead’

Gold Derby: In the car, you said you didn’t think the blondes would yield you and you told them it was OK. How mad were you?
Alana: I think we disappointed. I also stand by what I said — if they hadn’t been peer-pressured into yielding us, I don’t think they would have. But I also think if we had been in their shoes, we probably would’ve used our Yield too just to give ourselves that extra bit of cushion. I think it’s a good game move. It sucked, but I guess it didn’t suck extra because they did it. It just sucks that we were yielded — it didn’t matter who it was coming from.

Leo: I agree with Alana. I guess you said this, but I think they should have yielded us. I agree they wouldn’t have if not for the peer pressure. But that’s almost irrelevant to me because first of all, we didn’t know about the peer pressure at the time, and second of all, when we saw it, we were like, “Well, it makes sense.” It makes sense that someone who was second to last would yield us.

Alana: It was a bummer to wait around so long because it was cold. [Laughs]

Leo: It was really beautiful though. It was sunny, surrounded by mountains. It was a 20-minute break also. We got to chill out.

Gold Derby: I’m assuming you weren’t surprised to see that Will and James had egged them on to yield you.
Leo: James is obsessed with me. We were confused the whole time through the race why they targeted us. We didn’t realize the extent to which they targeted us. It makes more sense to us now. They really thought we were a threat, so as viewers at this point, it wasn’t a surprise.

Leo: Yeah, they thought about it, they heard some peer pressure, but ultimately, they made a decision. They used their power.

Gold Derby: Will and James said they were targeting you because you helped the blondes in the second leg, but they’re in a five-team alliance that doesn’t include you. Do you think that’s really why they were targeting you?
Leo: Yes. They were not offended that we helped. They saw that we were doing the same thing that they were doing and that made us a threat. They thought that was good strategy and they wanted another team that was using good strategy out. So it was not hypocritical for them to have responded that way; it was strategic.

Gold Derby: Do you regret helping Kaylynn and Haley in the second leg given what happened afterward?
Leo: No, I do not regret that because we were building a relationship. We saw Kellie and LaVonne, in particular, as a really strong team that we didn’t want to be racing against. And most of all, we reaped the benefit of helping Kaylnn and Haley in the Amazon when they had our back. It wasn’t really intended as a long-term alliance, but we got the sense that they would have our back later if we helped them.

And just like Aparna and I worked together in Berlin to get “sauerkraut,” that is a strategy that makes sense to us. If you’re with one other team and you agree to share information so that you can leave other teams behind and not come in last, you can get to the finale.

Gold Derby: To that point, what do you think of that alliance and Hung agreeing to stay behind and wait for DeAngelo?
Leo: That’s kryptonite.

Alana: We heard rumors about what happened in Berlin and obviously we hadn’t seen it. To be fair, we still haven’t seen the whole thing since everything’s edited. But that moment of them sticking around and giving everyone the answer — they gave over half the teams the answer — was a real turning point for me. The Mine Five alliance — we had no idea about that alliance at all. It’s wild to see because Hung and Chee definitely would’ve won that leg, which is not to say anything about the rest of the season. That was a moment, I think more as a viewer than a racer, where I was like, “That’s such a bummer.” Because that would’ve been such a cool test of the teams. Small point for Leo here: Leo and Hung were the only ones who got “sauerkraut” on their own that whole leg. And in my mind, that puts us in second place.

Gold Derby: You could also see, Leo, your internal struggle when Haley was asking you if it was hard and you didn’t tell her it was “sauerkraut.” I feel like it evens out that they ended up yielding you in the next leg because they were trying to save their own ass.
Leo: Yeah, that was part of why — that had to be running through their head. And Haley said it in Berlin: “I guess we’re not helping each other that much anymore.” The truth is we probably would’ve in situations where we both weren’t in last because why not run the same gambit? But Aparna and I didn’t know how far behind Kaylynn and Haley were. We knew we needed to finish before them to stay in the race or so we thought, so we needed to get out of that challenge together. Once they showed up, if I had told Haley, it would’ve been a race for last between three teams, and imagine if we had gotten eliminated because I decided to share that with her and just have a foot race — or a taxi race.

Gold Derby: Who were you rooting for after you were eliminated?
Alana: At the time, we were always rooting for Haley and Kaylynn. They’re underdogs, wonderful, resourceful women who always have a good attitude. But the same thing could be said for all of the teams.

One of my happiest memories was us eating Thanksgiving dinner together in Berlin. Berlin was on Thanksgiving Day, for context. We all usually finish the leg and go to our hotel rooms until the next one, but we got to eat Thanksgiving dinner together. And it was this really wonderful moment of getting to know the teams as people, not as racers. You saw how strong everyone is and how close everyone is to their partners. Everyone is such a threat because they have such good relationships and everyone has different strengths. I feel this way now: This is anyone’s game, and that’s why I felt like it was ours too.

Leo: It was since the beginning of the race. There was no weak team. You could figure you get past the first leg and they’re gonna be slow, but there’s so much respect for all the teams between all the teams.