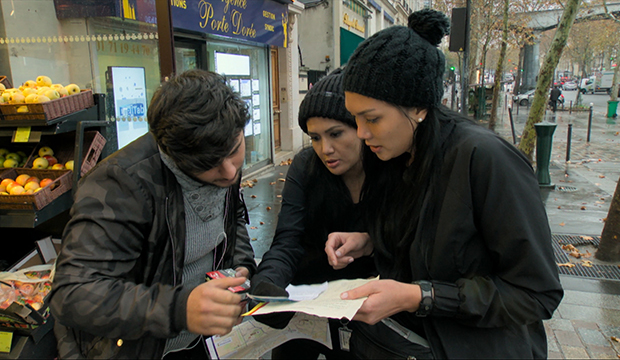 Michelle and Victoria Newland will always have Paris — but not exactly for the reason they want. The sisters were doing well on Leg 5 of “The Amazing Race 32” until they had to drive to the Musée des Arts Forains. It was a hop and a skip away, but they instead aimlessly drove around for six and a half hours.

Their unplanned detour (no pun intended) gave a reprieve to Kaylynn and Haley, who had a Speed Bump and started the leg lost, but they managed to get to the funfair museum first, sealing Michelle and Victoria’s fate. So how did they get so lost? Find out below.

Gold Derby: Do you know how far behind Kaylynn and Haley you were?
Victoria: We don’t. We would like to know though.

Gold Derby: I guess the big question is how did you get so lost for six and a half hours?
Michelle: We were sleep-deprived from the flight — a 14-hour flight — and sitting next to the bathrooms the whole time. We were brain dead. We asked several, several people — like eight, nine people — for directions, and they were vague. We were on the other side of the river. We even stopped and asked a police officer, and that was no help. We never gave up. But the time did not feel like it was that long at all. It was stop-and-go traffic. We kept on going and we never stopped to look at the time. That’s how dedicated in our mindset we were to try to find where we’re going. It flew by, so it kind of gives you a good point of view because it wasn’t like, “Oh, my gosh, an hour, two hours, three hours.” We kept on going and going, driving and asking, and stopping, and got vague directions. We got maps and people were pointing to where we needed to drive. We drove by it a couple times and we never even saw it. We didn’t know what we were looking for. To look back, it was tragic.

Gold Derby: We were you looking for what you typically thing of a museum as — big and grand?
Victoria: Yeah, this museum did not look like a museum.

Gold Derby: So no one knew where this place was or the area? Why were they so vague?
Michelle: They didn’t give good directions. I’m fluent in French and I understood we were going parallel against the river on the other side of the street, so we were looking the wrong way. They gave a map on the show to show which way we were going, away from the museum. I don’t know. It’s still a blur for me. I kinda try to block it out in my mind.

Gold Derby: Victoria, you were the navigator. You had a map. Was your map completely useless?
Victoria: I tried my best. I’m not a great navigator at all. Whenever we asked for directions, I wrote down detailed directions, but we just couldn’t get it. We were so sleep-deprived that at the end I kept rubbing my eye and saying, “There’s something in my eye, there’s something in my eye.” But really I was about to fall sleep. That’s how tired I was.

Michelle: Yeah, in the car, I was like, “Hey, hey, hey, what’s going on?” But we were both brain dead by the time we got [to Paris]. Victoria, you didn’t struggle at the art [Roadblock].

Victoria: Yeah, that only took me like five minutes.

Michelle: She walked out and I was like, “What happened? What’s going on?” Then she got it and I was like, “Woo! Let’s roll.” I didn’t have issues driving. There’s bumper-to-bumper traffic … and all of the sudden the sun’s going down. I’m glad they didn’t portray me to be even more crazy because I was freaking tired driving and talking. But it flew by so quickly.

Gold Derby: How far out did you drive or were you always driving parallel to it but passing it?
Victoria: We were always in the area, but we just couldn’t find the actual museum.

Michelle: Or the parking garage.

Gold Derby: Did you think, “This place is so hard to find. Other teams have to be getting lost too”?
Michelle: We were concerned only about us. We were the only team that was completely independent without help or with anybody else warning us, showing us anything. We were always on our own. I guess this time maybe it would’ve been nice to have been helped or following somebody and we would’ve been there in two seconds flat.

Gold Derby: The beginning of the leg was sort of like an omen. You saw Leo and Alana take an exit and you guys weren’t sure if you were going the right way.
Victoria: Oh, yeah, when they took a left. We turned around and got directions.

Gold Derby: Is it more disheartening now, having seen the episode, knowing that Aparna took 16 tries to do the art Roadblock and the blondes were also hopelessly lost until they got to the first Roadblock?
Victoria: Yeah, I felt proud of myself for doing the Roadblock so fast. [Laughs] I didn’t have any issue with it at all. It was get in, get out.

Michelle: For [Aparna] to take that many tries — Victoria, like I said, has an eye for everything. She notices everything, she has photographic memory, she does note-taking. Me, I would’ve been like, squirrel and we would’ve been done. Seriously, I was so glad Vic was doing this because it was a no-go for me. I was so proud of her. … We never had any issue with any challenge. It was just going from Point A to Point B.

SEE ‘The Amazing Race’s’ Kellie and LaVonne on their terrible taxi luck: ‘Imagine the worst case and triple it’

Gold Derby: There are seven teams left and five of them are in a loose alliance. It did not include you. What do you think about that? Were you aware of the alliance?
Michelle: We had no idea! We were so oblivious. We were like, “Hey, hey, hey!” And our feelings were hurt, like we feel left out. We were like, “We didn’t do anything.” I understand if we said or did something wrong, but we didn’t. We were always helping.

Victoria: That alliance formed when those first five teams got to the mines first [in Leg 2], so we weren’t part of that. And it bloomed from there.

Michelle: Looking back, I wish we had gotten help. I think things would’ve been different, but things happen for a reason and it shows how strong we are too to get through it.

Gold Derby: Who are you rooting for now?
Victoria: I’m rooting for Hung and Chee, and Will and James.

Michelle: Same. Asian parents — they know what’s up. Hung and Chee always have lists, checking it twice. They’re cool, calm and collected. They discuss things among themselves very diligently. They’re in the game. They’re very good. And Will and James just know everything — they’re superfans, [they know] this, this, that, that. Hung and Chee are so sweet. We wish them the best of luck.