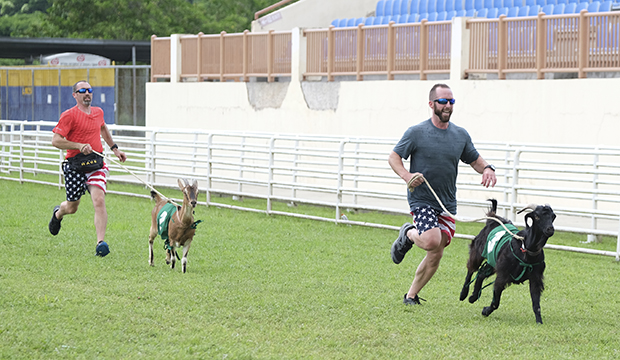 The first leg of “The Amazing Race 32” turned out to be a no-rest leg, as racers were told to keep on racing to Colombia, but that wasn’t the twist. For the first time, a team was eliminated on a no-rest leg, and BFFs Nathan Worthington and Cody Buell were the unlucky pair. The catfish noodlers fell behind at the Roadblock when Cody struggled to play “Day-O” on a steelpan drum.

How many attempts did it take before he got it? And is the duo surprised they were axed instead of getting the green light to continue racing? Find out in our exit interview below.

Gold Derby: How far behind the football players were you because it seemed like you caught up to them at the goat race?
Nathan: Well, [through] the magic of editing we were caught up. It wasn’t as close, but you never know — something might’ve happened in between that you didn’t know about and you’re not in last. That’s why you gotta keep racing.

Gold Derby: How many tries did it take you, Cody, before you finally the song down pat?
Cody: I would say about 835 or 836 times. [Laughs] Give or take.

SEE ‘The Amazing Race 32’ premiere recap: Who was the first to go in this ‘back to basics’ season?

Gold Derby: They did stop putting up the number of attempts for you at a certain point.
Cody: Oh, yeah. I started getting embarrassed not for me, but I started getting embarrassed for the other people around me that had to play the same song over and over again. I’m not even worried about me at this point. I’m worried about the other people that had to play that song, and they probably have that song in their nightmares as well.

Gold Derby: What was your issue with it? They showed you getting the notes wrong at one point and then the guy said you were too slow.
Cody: It was a miracle of no ability to keep the tempo. I’ve never done anything percussion. I can kind of play the banjo, but percussion-wise, I’m not very good. We knew going into this that our two things that would stop us on this race would be dancing and some kind of music challenge. Everything else, we would breeze through because we’re competitive and good at it, but those were the two things. And we were so fortunate to have that be our first Roadblock. [Laughs]

Gold Derby: Nathan, when you guys read the clue, you told Cody, “Oh, that’s you, dude.” Do you regret asking him to do it or do you think you would’ve been worse?
Nathan: As far as the outcome, I don’t think I would’ve done any better than what Cody had done. That, I do not regret. But as far as kind of putting the pressure on Cody, yeah, I do think about that a lot. I don’t know if that’s the fairest thing to do, but as far as the outcome, I could not have done any better than what he did.

Gold Derby: What did you think the task was when you read the initial clue before you found out the details?
Nathan: We didn’t particularly look at the spelling of it. It said “steel the show,” and I was like, “Oh, Cody’s more outgoing than me.” I figured he would be the one to steal the show.

Gold Derby: Cody, was it stressful knowing you were facing off against Olympians and professional football players, or did you feel like it could anyone’s game since all three of you were struggling?
Cody: Well, if there’s one thing that needs to happen on the record, it’s that I beat Kellie [Wells-Brinkley] [at the previous tasks]. I have beaten an Olympic athlete! [Laughs] We did beat Olympic athletes! It was intimidating, but as the time went on, we formed friendships and bonds that I don’t think would change. If they hand-picked the cast, if I had kids, I would let anybody in this cast raise my kids. They’re all just good people.

SEE Everything to know about ‘The Amazing Race 32’

Gold Derby: Nathan, what was going through you mind as you’re waiting for him and you’re watching all these teams complete it and go off to the next stop?
Nathan: I was thinking, “Poor Cody.” I knew this was not going to go well. Once I saw the steel drums and what it was going to be, I was like, “Oh, this is not going to end well for Cody.” I was more concerned with him versus anything else because I knew if we were eliminated first, Cody would beat himself up about, “OK, I let us down. We didn’t go farther because of me.”

Gold Derby: At the time, did you know that that was a continuation leg with no Pit Stop?
Nathan: We had a pretty good idea because in Trinidad, we did the barrels and it said to go on [to Tobago], so we knew probably the next one would be an elimination, so we had a good idea.

Gold Derby: Previously, when they’ve had continuation legs with no rest, they didn’t have an elimination. Do you think you got the short end of the stick here?
Cody: Maybe for other reasons, but not for that. It is what it is. God has a plan, and I think we got out of it what we were supposed to — we’re best friends. We’ve got people we love and care about.

Gold Derby: Who were you rooting for after you were eliminated?
Nathan: Kellie and LaVonne [Idlette], the track stars. Going in, we thought they were an intimidating team. They’ve been through the highest of the highs in competition. They still have a really good shot at winning this.

Gold Derby: How does someone get into catfish noodling?
Cody: [Laughs] You just have to have an adventurous spirit and willing to stick your hand in a hole. Start with a guide — Nathan taught me how to noodle almost eight years ago. I had a great teacher. Nathan’s a great teacher.