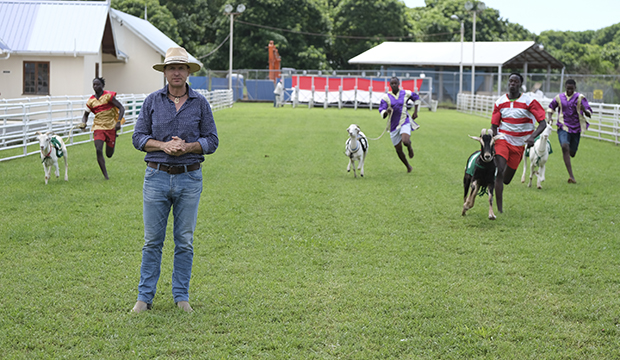 Our long national nightmare is finally over: “The Amazing Race” is back! Season 32 premiered Wednesday — 16 months after Season 31 ended. If you think that’s long, imagine how the cast feels because Season 32 filmed in November and December 2018 (not a typo).

Unlike last season’s reality showdown, Season 32 features a cast of newbies, but there are some notable folks, including former Carolina Panthers teammates DeAngelo Williams and Gary Barnidge, and Olympic hurdlers Kellie Brinkley and LaVonne Idlette.

Phil Keoghan also described the season to us last year as “back to basics,” so don’t expect a bunch of twists or bells and whistles. “Everybody always says, ‘What’s new and different?’ But at the end of the day, fans like the fact that there are certain things they can expect from the show and they want to see those things again and again. And there’s nothing wrong with that,” he said. “If you look at shows with incredible longevity, they’re the shows that keep giving fans what they want. So I don’t think we always have to be changing the core concept of what ‘Race’ is all about. It’s so good at a fundamental level. Why mess with something that everybody loves?”

Below, check out our minute-by-minute blog of the season premiere, which kicks off at the Hollywood Bowl.

8:00 p.m. — Phil prefaces the show by stating this season was filmed before the COVID-19 pandemic (that’s an understatement). He fails to mention this footage is almost two years old, but it’s new to us, so let’s get started!

8:02 p.m. — 11 new teams from all walks of life are taking their shot at a $500,000 prize. A few early spotlights: Retired NFL players DeAngelo & Gary feel they are “bred” to win this. Kaylynn & Haley are sisters who say they have the street smarts to go the distance. Leo & Alana are a couple of self-described nerds (but not) who have been dating for 10 months.

8:05 p.m. — The teams do some trash talking and have a few laughs at the start line while sizing each other up. Will & James are boyfriends and James has applied for this show nine times! Nathan & Cody are best friends from down south who feel like they’ve been given the chance of a lifetime. Meanwhile, Phil starts the race and everyone quickly runs to grab the backpacks and first clue. They’re heading to Trinidad!

8:10 p.m. — The teams land in Trinidad and immediately rush for taxis. Father/son duo Jerry & Frank are off to a quick start and we learn Jerry is a basketball legend in Louisville. Sisters Michelle & Victoria seem super aggressive and I have a feeling I’m going to like these two. Riley & Maddison are first to the clue box and take the early lead, followed by Hung & Chee. Teams will have to pick up a pair of barrels and roll them a quarter of a mile down the uneven streets of Trinidad. They’ll have to make their way through a crowd to find a “midnight robber” who will hand them their next clue.

8:15 p.m. — Eswar & Aparna (siblings) are still riding in their taxi while everyone else seems to have started the challenge. It doesn’t seem to concern them that they’re so far behind at this point. DeAngelo & Gary are first to finish the barrel roll and become the first of seven teams that will be on the first flight to Tobago in the morning. They’ll be joined by Jerry & Frank, Riley & Maddison, Hung & Chee, Nathan & Cody, Michelle & Victoria and Will & James. On flight two will be Kellie & LaVonne, Kaylynn & Haley, Leo & Alana and Eswar & Aparna. Eswar & Aparna got a wake-up call and are humiliated to be the last team to finish this challenge.

8:25 p.m. — Teams race to their next clue on Swallows Beach in Tobago. In “Fish Out of Water,” teams will search through 125 painted fish in an area over the size of a football field. They have to find the exact fish that matches the one on their boat. Teams then have to remember the code from the fish on the boat to unlock the matching fish in the water. Sounds exhausting! Teams begin getting frustrated, especially when they notice Michelle & Victoria are the first to finish the task. They must now travel by boat to Pigeon Point to find their next clue. Riley & Maddison are in second place followed by Jerry & Frank.

8:35 p.m. — Michelle & Victoria are first to the next clue box. In this week’s Road Block, teams must learn how to play a song on an acoustic drum-type thing. Luckily there are numbers that symbolize notes, so it’s sort of a memory game. Meanwhile, Kellie & LaVonne are the last team still in the water looking for fish and the Olympic hurdlers are mortified at the thought that they could be the first team eliminated. Over at the drums, Chee nails his performance on the first try and he and Hung are headed to the goat races aka the finish line! But there’s one catch, you have to cross the finish line with a goat. Michelle finishes on her second try and she and Victoria are off to the races in second place.

8:45 p.m. — In a close race to the finish, Hung & Chee narrowly beat Michelle & Victoria for first place, but not before Hung takes a nasty tumble attached to her goat. They haven’t won a prize, instead they are told the race continues and they have to catch a flight to Bogota, Colombia. Meanwhile, back at the drum kits a few players are really starting to struggle, particularly Kellie, Gary and Cody. It’s interesting because Kellie and Gary are two of the most accomplished athletes in this group, but it goes to show it takes more than physical ability to win “The Amazing Race”!

8:59 p.m. — More teams begin finishing this leg (the order is listed at the bottom of this blog). Gary and Kellie each finish the challenge. They’re both frustrated but determined not to be the first team eliminated. Finally, Cody is the last to finish and he and his partner Nathan hope they can catch up to at least one team. Kellie & LaVonne end up passing by DeAngelo & Gary in their boats and easily have the best form running to the finish line. DeAngelo & Gary finish in 10th place while Nathan & Cody finish in last. They will be the first team eliminated from the race. Tough day! The best friends still consider it an opportunity of a lifetime.