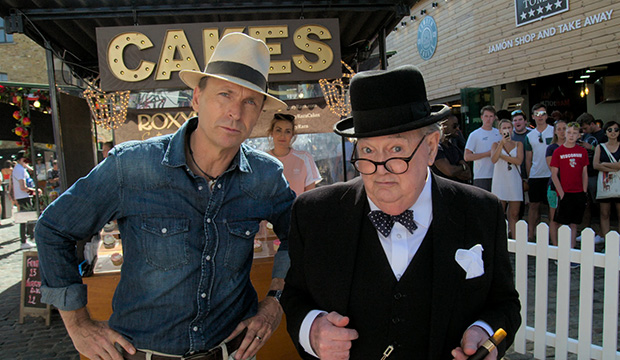 “The Amazing Race 33” had just started filming when production was suspended due to the coronavirus pandemic in late February. But while some productions are finding ways to resume filming as restrictions are loosened (like “The Bachelorette” staying in one location), it’s a totally different ballgame for a show that travels around the world.

“People have asked me when we’re going to be back shooting ‘Amazing Race,'” Phil Keoghan said on “EW Live” on Sirius XM on Tuesday. “And all I can say is, ‘As soon as that curve goes down.’ That line that we see — which is so depressing right now — unfortunately, is an indication of not shooting/shooting. I mean, that’s all there is to it.”

“The Amazing Race 33” had completed three episodes, including stops in England and Scotland, when it was forced to shut down. CBS has never indicated any possible resumption date.

Keoghan, whose new CBS show “Tough as Nails” premieres Wednesday, stressed the importance of everyone taking the pandemic seriously and working to flatten the curve by following social distancing guidelines and wearing masks. “We’ve got to bring that line down, and that is going to happen by all of us collectively working together to bring it down,” he continued. “And the only way it’s going to come down is if we stop the transmission. And I don’t need to talk to you about how it’s transmitted. But, yeah, this is going to be a collective effort where everybody’s going to have to say, ‘OK, I take responsibility, and it’s not just about me, it’s about the whole.’ And we can bring that number down and bring that curve down, and we’ll go out and we’ll shoot more ‘Amazing Races.'”

Fortunately, there is still new “Race” content just around the corner. Season 32 will finally premiere in the fall after sitting on the shelf for almost two years since it wrapped production in December 2018 (Keoghan was in post-production in June 2019, which was also when the 31st installment finished airing). CBS had initially given it a May premiere following the conclusion of “Survivor: Winners at War,” but later bumped it to the fall to ensure it had content to air in a COVID-19 world.