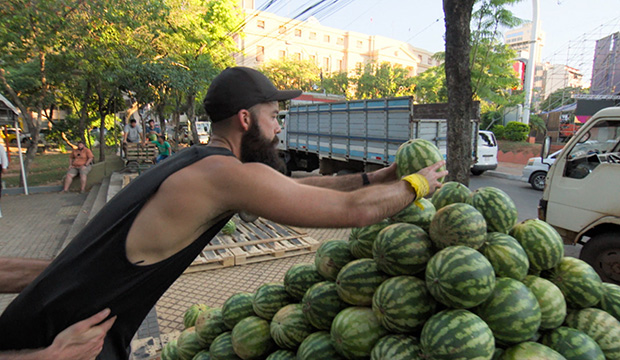 Get ready for double the taxi drama and double the eyebrow raises from Phil Keoghan because “The Amazing Race” is airing two episodes on Wednesday. The back-to-back episodes will start at the show’s new regular timeslot of 8/7c.

In the first hour, titled “Olé, Olé!”, the remaining eight teams head to Asunción, Paraguay, where they’ll get their choice between two switchback Detours from Season 20: stacking a pyramid of watermelons or performing a traditional Paraguayan bottle dance.

The second episode, “You Don’t Strike Me as a Renaissance Man,” will see the teams depart South America for Paris, where they will have to put their chef hats on and make enough Crème Chantilly for four pies. And they’ll also compete in carnival games.

These are the fourth and fifth episodes of the long-delayed 32nd season, which finally premiered last month after completing production in December 2018. “Race” moved up an hour to its new timeslot last week to make room for “Big Brother 22’s” two-hour finale. CBS’ Wednesdays-at-9 slot is vacant at the moment as its Wednesday dramas, delayed due to COVID-19, won’t return until next week when “S.W.A.T.” kicks off its fourth season with a two-hour premiere at 9/8c (“S.W.A.T.’s regular timeslot is at 10/9c).

“Race” will have another night of double episodes the following week on Nov. 18 before “SEAL Team” returns with its fourth season on Nov. 25 at 9/8c.