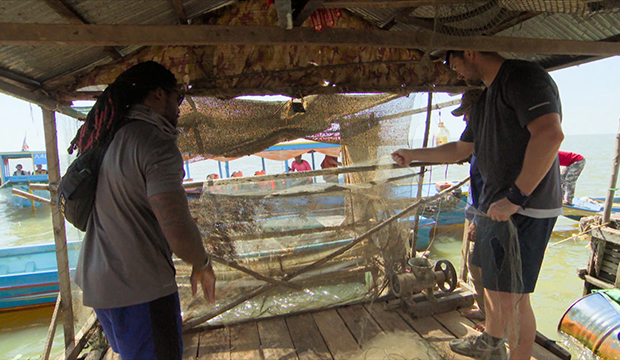 After two weeks of double episodes, it’s back to a single helping of “The Amazing Race” this week, but the drama quotient still ought to be high.

The final five, which are the Mine Five, will head to Siem Reap, Cambodia, where the second and final double U-Turn awaits them. As revealed in the preview, the core trio of Will and James, Hung and Chee, and Riley and Maddison plan to U-Turn DeAngelo and Gary if they get to the board first because they’ve been increasingly peeved by the former NFL players not pulling their weight in the alliance. DeAngelo and Gary, naturally, have no clue people are annoyed with them, but with no other outside team left, it’s the perfect time for those three to pull the trigger.

SEE ‘The Amazing Race’s’ Kaylynn and Haley: ‘We either had really good luck or really bad luck’

So, basically, DeAngelo and Gary are screwed if they don’t get to the U-Turn before the other three, who would also presumably burn the second U-Turn. They would have a shot if the second U-Turn is open for them. Meanwhile, Eswar and Aparna are just along for the ride.

Last week’s Mega Leg saw the demise of Kaylynn and Haley, who couldn’t mount another improbable comeback (getting yielded twice sure didn’t help). Riley and Maddison won both portions of the leg, their second and third first-place finishes of the season.

Below, check out our minute-by-minute blog of “Getting Down to the Nitty Gritty.”

8:05 p.m. — As the winner’s of the last leg of the race, Riley & Maddison will depart first. Teams are flying from India to Siem Reap, Cambodia. Once there they’ll meet up with the Travelocity Gnome, which holds their next clue. Now that the Mine Five alliance is all that remains, teams seem to be ganging up on DeAngelo & Gary. We’ll see how things play out.

8:10 p.m. — The teams land in Cambodia and rush into taxis. Will & James are the first team to get their traveling gnome and open the next clue. They must help a local driver assemble their tuk tuk and drive to a pier to find their next clue. The core alliance is all out in front with DeAngelo & Gary and Eswar & Aparna a ways behind. Riley & Maddison recapture the lead, with the next clue sending them by boat to a floating Buddhist temple. There they will drop off a basket of donations and receive their next clue. Halfway to the temple Riley & Maddison’s boat breaks down and other teams begin to pass them.

8:25 p.m. — The bearded bros get lucky when their boat begins working again after a quick stop. They haven’t lost much time, but Hung & Chee have now taken the lead. In the next Detour, players must choose to catch 30 pounds of fish OR mix soil and plant seeds to replicate an existing garden. Hung & Chee and Will & James are gardening, while the other three teams are fishing. Riley & Maddison complete the Detour first and will now head to their next clue box, which also has a Double U-Turn. DeAngelo & Gary are hot on their heels, so Riley & Maddison decide not to U-Turn them, fearing the NFL players would retaliate by U-Turning one of their alliance members. DeAngelo & Gary actually get there first and U-Turn Eswar & Aparna. The brother and sister will now have to complete both Detours. Next, the bearded bros intentionally waste their U-Turn on the NFL players so nobody else could get U-Turned. Cuthroat! DeAngelo & Gary and the beard bros will head to Khmer Floor Handicraft where they’ll receive their next clue.

9:40 p.m. — DeAngelo & Gary had a solid lead but Riley & Maddison have a faster driver and get to the Road Block first. In this task, teams must learn the process of making fragile, hand-crafted tiles and then solve a puzzle. Currently four teams are working on their tiles while Eswar & Aparna are still back at the Detour. DeAngelo and Riley were both too impatient to watch a full demonstration and can’t figure out how to get their tiles out of the mold without shattering them. Riley heads back to re-watch the demonstration, but DeAngelo keeps doing the wrong thing. Riley completes his tile and can begin working on his puzzle. Meanwhile, Will launches himself and James into second place by paying attention. Riley finishes the puzzle and now he and Maddison will head to the next Pit Stop at Angkor Thom.

9:59 p.m. — Riley & Maddison are the first team to arrive at the Pit Stop, winning a trip for two to Norway. Will & James finish close behind. Meanwhile, Chee and DeAngelo are both still struggling to make tiles when Eswar & Aparna arrive. Aparna talks some smack to DeAngelo while he keeps screwing up, letting him know karma has come back to haunt him. She’s not happy. It’s been two hours and Gary’s frustration grows because DeAngelo has yet to watch a full demonstration. He has no idea he has to grease his plate so it comes out correctly. Chee has the good sense to watch the demonstration again and moves himself and Hung into third place. Finally, DeAngelo sees that he needs to grease up his tile and begins to do things correctly. He completes his tile on his 12th attempt, but can he complete a slide puzzle? Yes he can. But their bad karma continues when DeAngelo & Gary can’t find a tuk-tuk to bring them to the Pit Stop. When they finally get one, they get stuck at some tree removal construction. It’s a race to the finish line, but DeAngelo & Gary finish in fourth place. Ewar & Aparna have been eliminated from the race.