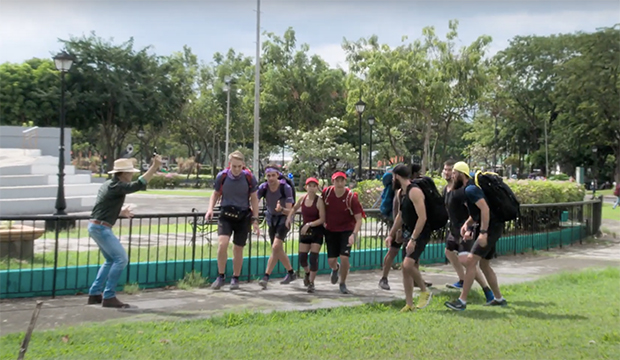 Get ready for another Thrilla in Manila. Maybe. The final four teams head to the Philippines capital on Wednesday’s “The Amazing Race,” and it won’t be your usual penultimate leg.

Nay, instead, the final four — Riley and Maddison, Will and James, Hung and Chee, and DeAngelo and Gary — will race in a city sprint as a team for a spot in the final three. There will be no Roadblocks or Detours, not unlike the Season 29 finale. And as the preview teased, there is a memory challenge of some sort.

This set-up could portend bad things for DeAngelo and Gary since the other three still want them out and had their plan foiled last week when the former NFL players arrived at the Double U-Turn board first.

SEE ‘The Amazing Race’s’ Eswar and Aparna are still upset about getting U-Turned: DeAngelos and Gary’s ‘move was really dumb’

Leg 9 saw the demise of Eswar and Aparna, who were U-Turned by DeAngelo and Gary. They had a chance to catch up as DeAngelo struggled at the Roadblock, but alas, it was not meant to be. Riley and Maddison notched their third straight first-place finish and their fourth overall.

Below, check out our minute-by-minute blog of “Run on Your Tippy Toes.”

8:15 p.m. — As the winners of the last leg of the race, Riley & Maddison are the first to leave for Manila and must find Phil Keoghan at Lapu Lapu Circle. The racers don’t typically run into Phil at the beginning of a leg, so they know something is up. The teams all arrive to meet Phil at the same time. He explains to them that for the first time ever, they’re about to take part in a city sprint. Speed matters! The Pit Stop for this leg of the race will be exactly where they start. With clues in hand, teams must find the dancing traffic officer to snag their next task. Riley & Maddison grab theirs first, followed by DeAngelo & Gary.

8:25 p.m. — Riley & Maddison get their next clue, which directs them to race in a 500 meter high heel dash! They’ll strap on a pair of pumps and complete the designated course. They actually pretty comfortable in these heels, but Gary seems to have a more of a problem with running in general, not the shoes. Riley & Maddison stay in first place and receive their next clue. They’ll make their way to Binondo Arch of Goodwill to retrieve their next clue. DeAngelo & Gary find theirs first and overtake the lead. Will & James are next, dropping the volleyball players to third. Meanwhile, Hung & Chee are completely lost.

8:40 p.m. — Gary & DeAngelo are the first team to receive their next clue, which instructs them to find horse-drawn carriages. Once identifying the horse of their choice, they’ll have to seek out the proper ingredients to mix up some horse feed. Once they’ve served it up, they’ll get their next clue. The football players aren’t the most observant duo and they pass right by a necessary ingredient, losing ground to Will & James. In the back of the pack, Hung & Chee are finally back on track, but they have lost some serious time. Will & James pull into first place after feeding their horse and get their next clue – travel on foot to a marked destination. They arrive to discover their next task will be listening to a band play a medley of song they’ve heard on the race. They must correctly identify four pieces of music they’ve heard while on their race around the world. They must also place flags of the country they heard each piece of music in, in the order they traveled there. Once complete, they can race to the Pit Stop. Hope they’ve been paying attention!

8:59 p.m. — As the teams struggle to identify the correct music, Hung & Chee arrive and it’s every team for themselves! Gary & DeAngelo almost got it right by accident on one attempt, missing just one, but came back doing worse than the time before. All of the teams are frustrated and continue to fail time and time again. Finally, Gary & DeAngelo are targeted as the other three teams commit to working together to eliminate them. After trying every possible combination, Will & James pull out their clues and realize they have not been putting the flags in the order the music was played during the race, not the order it was played by the band. Oops! After figuring that out and sharing the information with the other teams, Riley & Maddison finish the task and head to the Pit Stop. Before taking off, they tell Will & James and Hung & Chee the answer, infuriating DeAngelo & Gary. Completely deflated, the footballer players quit the task and take the two hour penalty. Over at the Pit Stop, Riley & Maddison finish in first place, followed by Will & James and Hung & Chee. They’ll head into the finale next week, but only one team in this alliance can win! Meanwhile, DeAngelo & Gary were eliminated and DeAngelo is so pissed that he says his experience on the race was terrible and he would never do it again. At least Gary seemed to enjoy it. Anyways, next week the Season 32 winners will be crowned!