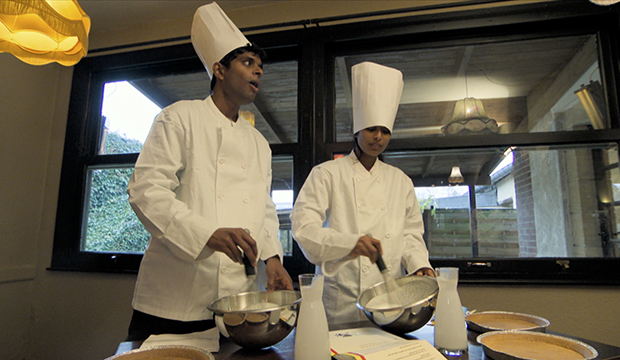 Let’s try this again. There’s only one hour of “The Amazing Race” this week, but you will finally get to see the episode that was preempted last week when CBS cut the double-header to one episode for election coverage.

The fifth episode takes the teams out of South America and to Europe — Paris, specifically. The top eight duos have to self-navigate with manual cars — it does not start out well for Will and James — and then put on their chef hats to make enough Crème Chantilly for four pies and participate in carnival games, likely a nod to the Paris Carnival.

Will and James won Leg 4, their second straight victory, so only two teams have won the legs so far, the other being Hung and Chee, who dropped from second place to sixth. There was a lot of placement-shifting this leg as the switchback bottle dance Detour proved to be easier than the watermelon-stacking one. DeAngelo and Gary, who arrived at the Detour in first place, struggled with the melons and escaped last place in seventh. Kaylynn and Haley came in last, but it was a non-elimination leg, so there’ll be a Speed Bump with their names on it in Paris.

Below, check out our minute-by-minute blog of “You Don’t Strike Me as a Renaissance Man.”

8:02 p.m. – As the winners of the last leg of the race, Will & James will be the first team to leave Paraguay, flying more than 6,000 miles to Paris, France. Next, they’ll proceed Domaine de Chantilly, where teams will find their next clue, 30 miles outside the city. Michelle & Victoria are trailing right behind them, excited to learn teams will be self-driving throughout this leg. Hope everyone knows how to drive a stick shift!

8:05 p.m. – The teams on the first flight to Paris are Leo & Alana, Riley & Maddison, Michelle & Victoria and Will & James. The other teams don’t have to worry too much, they’re just 15 minutes behind. The first flight lands and teams rush to their cars and begin pulling out of the parking ramp. Riley & Maddison appear to get out of the lot first, but the other teams are stuck behind Will & James, and Will cannot figure out how to drive this stick shift. As much as Leo enjoys watching them struggle, Will is preventing him from continuing the race, so he hopped out of his car and moved them out of the way. With the ramp now clear, Michelle & Victoria and Leo & Alana drive away, leaving Will & James behind wishing they had driving lessons.

8:15 p.m. – Will finally figures out how to work his stick shift so he and James are off to the races. Luckily, they’re still ahead of everyone in the second flight. Meanwhile, Riley & Maddison are the first to the Roadblock, where teams must match a person depicted in one of the many paintings on the wall with a real-life person who has shown up to the chateau for a party. Side note, there are a TON of paintings! Riley nailed this Roadblock and him and Maddison are already leaving before anyone else arrives. They’ll head out to whip up some fancy whipped cream and fill up four pies before getting their next clue.

8:25 p.m. – Leo & Alana are currently in second place but are a bit frustrated to see that Will & James have arrived in third. As annoying as they may be to some of the others, Will & James are competitors. Michelle & Victoria are completely lost and haven’t found the chateau. Teams from flight two are now showing up and Hung & Chee hurl themselves into fourth place. Michelle & Victoria finally arrive, and now it appears Kaylynn & Haley are in last place.

8:35 p.m. – Riley & Maddison deliver their pies and along the way they realize part of this challenge includes being pelted with pies by onlookers as they drop off their whipped creations. It’s quite hilarious. They were able to hold onto their pies and make the delivery, earning their next clue. Teams will now make the one-hour drive back to Paris and arrive at the Musee Des Arts. Here teams can use a Yield, which Riley & Maddison decline. In this Double Roadblock, teams must win three carnival games to win a clue. Meanwhile, DeAngelo & Gary finally arrive at the chateau and are relieved to see Eswar & Aparna are still there. In last, Kaylynn & Haley arrive, but first must complete their Speed Bump, which includes cleaning up some riding gear for the Chantilly horses.

8:45 p.m. – Gary flies through the art challenge at the chateau, passing up Eswar & Aparna. Aparna just can’t figure this out! Finally, after 16 attempts, Aparna completes the task and keeps them out of last place. Over at the carnival, Riley & Maddison hold their lead and are the first team to complete this second Roadblock. They’ll head to the Pit Stop, Pont Des Arts, where the last team to arrive may be eliminated. Riley & Maddison claim their first victory, winning a trip for two to Vietnam. Hung & Chee (who is amazing at carnival games) continued their streak of consistency with second place. Leo & Alana finish in third.

8:59 p.m. – Michelle & Victoria are completely lost, but so are Kaylynn and Haley. As more teams complete this leg of the race, it may come down to simple navigation skills. Neither team can find the carnival games. Kaylynn & Haley arrive first and figure they’re in last place, having not seen anyone all day. They laugh their way to the Pit Stop and are astonished to learn they have avoided elimination yet again. Michelle & Victoria stumble to the Pit Stop in the dark of night and Phil lets them know their race is over. Bummer! That’s a wrap for tonight.