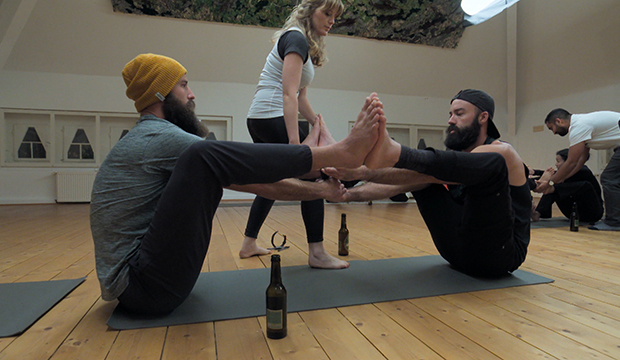 After an aborted double-header two weeks ago, “The Amazing Race” will try its hand again Wednesday with back-to-back installments of the sixth and seventh episodes of the season.

In the first hour, the remaining seven teams head to Berlin, where another self-navigating leg awaits, this time in tiny Trabants (good luck, Will and James), and a death-defying face-first walk down the side of a 200-foot tall building scares the bejeesus out of Hung. There’s also beer yoga, which is something we’re definitely interested in.

In the second episode, the teams enter chilly Almaty, Kazakhstan, and visit a remote nomad village. Tasks include performing a choreographed fight and decorating the interior of a yurt.

SEE ‘The Amazing Race’s’ Michelle and Victoria explain how they got so lost: ‘We were brain dead’

Riley and Maddison won Leg 5 after getting out to a lead and never relinquishing it. Hung and Chee recovered from their rough Leg 4, in which they came in sixth, with a second-place finish, giving them two first places and two second places now. Kaylynn and Haley thought they were doomed after getting lost at the beginning of the leg, compounded with their Speed Bump, but they, to their shock, survived thanks to Michelle and Victoria getting hopelessly lost and driving around Paris for six and a half hours.

Below, check out our minute-by-minute blog of “I’m Not Even Walking, I’m Falling” and “Give Me a Beard Bump.”

8:05 p.m. — As the winner’s of the last leg of the race, Riley & Madison will depart first, traveling by train to Berlin, Germany. Teams will find their first clue within a suitcase when they arrive. It looks like this mode of transportation will be an equalizer because everyone’s on the same train. Here we go!

8:17 p.m. — Teams get to Berlin and hop in their taxis, headed to the Berlin Wall. It’s at a gallery along this wall where the racers will find their next clue. Will & James are technically first, but everyone’s right there with them. For their Route Info challenge, contestants will drive themselves around in a Trabant, heading to Teledisko, to find their next clue. These cars are tiny and it’s especially entertaining to see DeAngelo & Gary squeeze in. Despite having trouble fitting in their Trabant, the football players arrive first, dancing in the Teledisko until the music stops. Next, teams will drive to Andels Hotel, where they’ll encounter a Yield. Will anyone use it? Meanwhile, Kaylynn & Haley are in the back of the pack, barely able to drive their Trabant. What a shocker.

8:30 p.m. — Will & James struggle with the clutch of their car and have decided to run to their next clue. DeAngelo & Gary are first to the Andels Hotel and decide not to Yield anyone. In the Road Block, one teammate will complete a face-forward rappel down a 180-foot building. As they’re doing it, they’ll have to unscramble a word puzzle on the ground beneath them. DeAngelo gets to the bottom of the building and is shocked to learn he was supposed to unscramble letters on his way. Back to the top he goes! As he heads back up the stairs, DeAngelo strikes a deal with Hung and she agrees to not leave the Road Block until she’s sure DeAngelo knows what the unscrambled letters say. It pays to be in an alliance! Hung rappels down the building and is absolutely freaking out, but still manages to unscramble the letters: Sauerkraut. Hung & Chee are now in first place. They keep their word and wait for DeAngelo & Gary as well as Riley & Maddison. At the Detour, teams will need to learn a song that translates to “I Wish I Were a Chicken” OR learn a sequence of beer yoga poses and teach them to a class to retrieve their next clue.

8:45 p.m. — Hung is a little miffed at DeAngelo because he took the only taxi available and now she and Chee are struggling to grab one. They finally get one, but they’ve fallen into fourth place. DeAngelo & Gary arrive at the beer yoga challenge in first place. Back at the rappel challenge, Aparna and Leo finish unscrambling the letters just as Kaylynn & Haley arrive. Leo refuses to tell Haley what the scrambled word is, so this little alliance is broken. The blond sisters pledge not to help Leo in the future, which likely won’t matter because those two are always about two hours behind everyone else. Way to go, Leo! Both Riley & Maddison and Hung & Chee arrive at beer yoga. Will & James decide to go to a different Detour, choosing to sing the chicken song. They soon realize it won’t be as easy as it sounded. DeAngelo & Gary finish the Detour first and will begin racing to the Pit Stop at Neukolln. They arrive first, winning $7,500 each. Meanwhile, Haley has failed the rappel challenge three times and starts crying. This may finally be the end for her and Kaylynn.

9:00 p.m. — Teams finish in the following order after DeAngelo & Gary: Riley & Maddison, Hung & Chee, Will & James, Eswar & Aparna and Leo & Alana. Hung is informed sticking around to help Gary & DeAngelo cost her $15,000, so lesson learned! Meanwhile, Haley & Kaylynn are SO FAR BEHIND once again. They stumble to the mat in last place and Phil lets them know it’s a non-elimination leg. There is no getting rid of these two!

9:15 p.m. — As the winners of the last leg of the race, DeAngelo & Gary will be the first to depart. Teams will fly to Kazakhstan, where they’ll head to Kazakhfilm Studio, the number one movie studio in central Asia. There, teams will choose their next Detour. All teams are on the same flight and once again on an even playing field. Everyone arrives in Kazakhstan and it’s definitely a different climate. There’s lots of snow and it looks freezing! All teams are at the Detour, but Kaylynn & Haley must first complete a speed bump. For the Detour, teams must choose between correctly answering questions about details in an action sequence OR learn a choreographed action sequence themselves. Everyone but Hung & Chee and Leo & Alana decide to learn choreography. Kaylynn & Haley are now wearing beards from their speed bump, but they arrive at the Detour before anyone else has finished. But soon after, Riley & Maddison complete the Detour and will head to Nomad Village, Karasay District in first place. There’s a Yield ahead, with only two legs left to use it.

9:33 p.m. — Hung & Chee are first to arrive at the next challenge and choose not to Yield anyone. Here, teams must choose a camel laden with possessions and lead it to a yurt. They then must arrange the items inside as shown by a display, including a cooked lamb’s head. Riley & Maddison arrive next and also choose not to use their Yield. Will & James and DeAngelo & Gary arrive next, also not using any Yields. Meanwhile, Leo & Alana are really struggling in last place, unable to correctly count spears back at the Detour. To make things worse for them, Kaylynn and Haley choose to Yield them after getting some peer pressure from the other teams at the yurts. Ouch!

9:45 p.m. — Will & James finish their yurt first and will now travel to Zelenyi Bazaar and search the meat market for their next clue. Other teams begin finishing their yurts as well, but once again Hung can’t help herself and gives DeAngelo & Gary valuable answers that lead to them completing the task. She immediately regrets it, but the funniest part is her lecturing Chee in the car that he has exactly 90 seconds to be frustrated with her, haha. It looks like the teams in jeopardy are Eswar & Aparna, Kaylynn & Haley and Leo & Alana. Meanwhile, Will & James have received the next clue from the meat market. Teams will have to head to First President Park, the Pit Stop for this leg of the race. The last team to check in WILL be eliminated.

9:59 p.m. — Will & James finish this leg in first place, their third win of the season. They have won a trip for two to Las Vegas. Riley & Maddison finish close behind in second. The rest of the order is Hung & Chee, DeAngelo & Gary, Kaylynn & Haley (by some miracle) and Eswar & Aparna. Leo & Alana couldn’t overcome their Yield and finish in last place. They have been eliminated from the race.