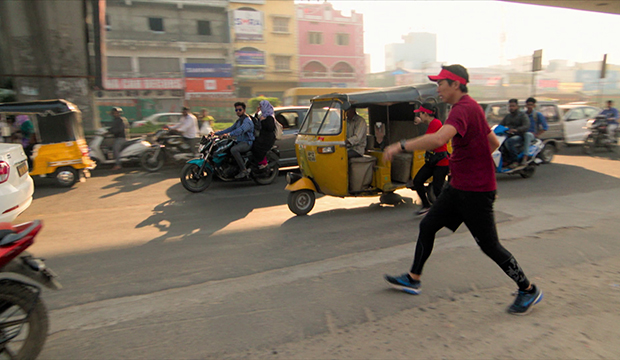 Thirty-two seasons in and “The Amazing Race” is still achieving firsts with the first-ever mega leg on Wednesday. It’s double the Detours, double the Roadblocks, double the Yields, double everything — yes, it’s two hours — and frankly, it’s kind of surprising the show hasn’t done this before.

TPTB did choose the most stressful place for a mega leg: India. The remaining six teams — the Mine Five alliance and Kaylynn and Haley, who is on, like, their seventh of nine lives — will race through Hyderabad in Wednesday’s double-header. Tasks include delivering food, a coding game and smog-checking auto rickshaws.

Plus, these are the last two times the Yield will be in play. It’s only been used once so far, last week by Kaylynn and Haley after Will and James encouraged them to yield their frenemies Leo and Alana. The sisters will definitely be easy Yield targets to ensure that the Mine Five make the final five, but with DeAngelo and Gary rubbing their alliance members the wrong way, the Mine Five could implode sooner than expected.

SEE ‘The Amazing Race’s’ Leo and Alana: ‘The Yield was 0 percent why we got eliminated’

Leg 7 ended with Will and James notching their third first place, the most of any team so far. After getting spared by a second non-elimination leg in Leg 6, Kaylynn and Haley improved to a fifth-place finish, while Leo and Alana got the ax.

Below, check out our minute-by-minute blog of “Are You a Rickshaw?” and “This Is Not Payback, This Is Karma.”

8:05 p.m. — As the winners of the last leg of the race, Will & James will be the first to leave Kazakhstan and fly more than 2,000 miles south to the middle of India, Hyderabad. Once known as the city of pearls, it is now considered the cyber capital. It’s the first mega leg and Will & James are looking forward to using their Yield. Meanwhile, Hung & Chee are totally over one team on their alliance: DeAngelo & Gary. Will they finally cut the cord? All teams are on the same flight so it’s an even playing field. Let’s go!

8:15 p.m. — The teams arrive in India and it’s a mad dash for taxis. Eswar & Aparna arrive to the clue box in first place. I think that’s the first time I’ve said that this season. In this first task, teams will have to flag down three auto rickshaws to check pollution with a smog test. Eswar & Aparna finish in first place, getting their clue for the Detour. In this Detour, teams must either partner up with a Swiggy (food delivery service) phone operator to deliver three food deliveries OR use motion-sensor technology to crack a code in “number trap.” The Mine Five all choose number trap, but Kaylynn and Haley will be delivering food. Eswar & Aparna are both coders and are thrilled by this task, but soon realize it’s more about hand-eye coordination than intelligence. DeAngelo & Gary finish the first part of the task first and now must decode their numbers. Meanwhile, the blonds are lost again.

8:30 p.m. — Will & James finish the Detour first, decoding the message “You can find the clue on the fourth floor bunker.” They’ll travel to the next clue, where teams have the option to use their Yield. Will & James choose to Yield Kaylynn and Haley at the Road Block. For this next task, teams will use augmented reality interface to travel through a virtual world, seeking out three distinctive turbans out of 18 possibilities. They must then travel upstairs and match up the digital turbans with three real people upstairs at the tomb. Meanwhile, Hung & Chee are really struggling in the back of the pack and decide to switch Detours.

8:45 p.m. — Kaylynn & Haley finally find the Swiggy delivery booth, but they had gotten lost AGAIN so they’re behind Hung & Chee even though the married duo had already wasted time at another Detour. Kaylynn & Haley have serious communication issues with their Swiggy operator and things aren’t looking good for the sisters. Meanwhile, Hung & Chee wrap things up and head to the Road Block, leaving Kaylynn & Haley alone in last place. Meanwhile, James can’t figure out how to place the men wearing turbans and has completely lost his lead. Gary ends up telling him how to line things up appropriately, but Riley & Maddison finish the Road Block in first place, with DeAngelo & Gary close behind.

9:00 p.m. — Teams will now travel to their next clue. Back at the turban challenge, Hung & Chee are energized to see teams are still there there when they arrive. Will & James finally wrap things up and head out in third place. Hung & Chee have passed Eswar & Aparna and have overtaken fourth place. Kaylynn & Haley get to the Road Block to find themselves Yielded, giving Eswar & Aparna a nice cushion.

9:15 p.m. — Kaylynn & Haley finish their time-out and are hoping to stay within striking distance of Eswar & Aparna, but the brother/sister duo have just completed the Road Block. Meanwhile, Riley & Maddison get to the next Detour in first place. Here, teams will have the choice of “this” or “that.” With that vague description, they brothers just have to pick one. DeAngelo & Gary arrive in second place, followed by Will & James. Riley & Maddison will have to complete a set of bracelets for a bride, pushing cart to a nearby shop and then search the cart for the exact set of bangles that the bride in the shop is wearing. When they have a perfect match, they’ll get their next clue. Further back, Hung & Chee and Eswar & Aparna arrive at the Road Block clue box. Hung & Chee choose “this” like everyone else and Eswar & Aparna are the first team to choose “that.” Meanwhile, Kaylynn & Haley have finished their Road Block and are heading out to catch the other teams.

9:30 p.m. — Riley & Maddison finish the Detour in first place, now traveling by auto rickshaw to Taj Falaknuma Palace for their next clue. It’s the last chance teams can use their Yield. Back at the Detour, Hung & Chee switch tasks to join Eswar & Aparna, taking molds of someone’s teeth to create dentures. Eswar & Aparna are disgusted by this challenge, but Hung says she’d give someone a colonoscopy if she had to without a second thought. Unfortunately, there’s only one station so Hung & Chee have to wait for the brother/sister duo to finish their molds. Meanwhile, Riley & Maddison arrive in first place to the next clue box, where they will change into some traditional clothing and travel by horse and carriage to their next destination. Here, they decide to Yield Kaylyn & Haley. Dang! The blonds just can’t catch a break. At this Road Block, teams will prepare a 108-foot table for a royal dinner inspired by the artwork in the palace. When the settings are properly placed and measured, teams will receive their next clue.

9:45 p.m. — Riley begins working on his place settings and the brothers are sitting pretty in first place. Gary & DeAngelo finish the Detour in second place, followed closely by Will & James, Eswar & Aparna and Hung & Chee. Kaylynn & Haley have just arrived at the Detour, choosing to make dentures. Over at the place-setting challenge, Riley realizes the placings have to be measured, but he makes sure to not reveal that clue to Gary, only to James. The Mine Five alliance is officially dead. Kaylynn & Haley finish the Detour and head to the final Road Block in last place. Meanwhile, Riley & Maddison finish their place setting and arrive at the Pit Stop in first place. They have won a seven-day Caribbean cruise for two.

9:59 p.m. — Will & James head to the Pit Stop, but not before cluing in Hung on how to properly measure her place settings. Nobody wants to help Gary, who is struggling with his measurements. Despite his lack of assistance from the Mine Five, Gary completes the task, and he and DeAngelo finish in third place. Kaylynn & Haley find out they’ve been Yielded once again and at this point all they can do is laugh. Hung & Chee and Eswar & Aparna wrap things up almost simultaneously, finishing in fourth and fifth. The blonds finish in last place and their luck has finally run out. Kaylynn & Haley have been eliminated from the race.