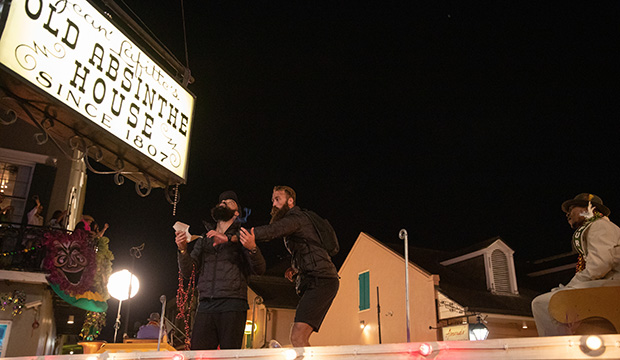 After 33,000 miles, 11 countries and two years sitting on the shelf, “The Amazing Race 32” will cross the finish line Wednesday and crown a new champ.

The final three — Riley and Maddison, Will and James, and Hung and Chee — will travel to New Orleans, where the finish line is at the Superdome. Here’s to the tasks being tough in the Big Easy since these guys have had it pretty easy with their multiple alliances. Will they resist the urge to race to the finish together? Let’s hope.

Everything has gone according to plan for the final three — well, except being unable to U-Turn DeAngelo and Gary two legs ago. But no matter since they ultimately were able to get them out last week when they banded together to figure out the music challenge while they left the former NFL players out hung to dry.

All three teams have notched first-place finishes, with Riley and Maddison taking five, including the last four in a row (counting the Mega Leg’s halfway point). Will and James have three and have come in second the past three legs. Hung and Chee started strong winning the first two legs, but haven’t led the pack since.

Below, check out our minute-by-minute blog of  “Now It’s About Winning.”

8:05 p.m. — At this point I just expect these three teams to hold hands and see what happens if they all cross the finish line at the same time. They’ve been codependent and paranoid all season, targeting teams that never really proved to be stronger than any of them. So let’s see what happens when the $1 million is actually on the line. As the winner’s of the last leg of the race, Riley & Maddison are first to receive notice that their next stop is New Orleans. All teams will be on the same flight – off they go!

8:15 p.m. — The teams sprint out of the New Orleans airport and hop in taxis en route Louis Armstrong Park. Will & James get their first, taking the early lead. In this task, teams have to collect beads being thrown from the Bourbon Street iconic balconies. When they have 50 red necklaces and 50 gold necklaces, they’ll get their next clue. I’ll assume they’re keeping this G-rated for CBS. Meanwhile, the Beard Bros have a bum cab driver and have begun this leg unable to find the French Quarter. Yikes! Will & James are collecting their beads when Hung & Chee arrive to join them.

8:25 p.m. — An upstanding citizen finally points Riley & Maddison in the right direction so they’re officially back in the race. They’ve lost significant time, but it doesn’t seem insurmountable. Hung & Chee think they finished collecting beads first, but then realize only large beads are acceptable. Will & James are the next to figure this out and suddenly all three teams are neck and neck. Will & James finish first and receive their Road Block clue. One member of each team will have to find a little plastic baby hidden within a king cake at the bakery. Sounds super creepy, but apparently it’s a tradition. Hung & Chee race off to the bakery next, leaving Riley & Maddison in third place.

8:35 p.m. — Will is the first to find a baby and now he and James must eat a half dozen beignets. As they gorge themselves the other teams are frantically looking for babies in the cakes. Will can’t stomach anymore beignets and he’s about to puke while he begs James to eat them. Chee digs through his last cake, realizing he must have missed the baby in a previous one. How demoralizing. What’s worse, Hung can see his baby laying on the table but she can’t tell him where it is! Suddenly, Will forces down what’s left of his beignet and he and James get their next clue. They’ll travel by taxi to the convention center and search for the next clue. In their next Road Block one team member must climb under a bridge, climb out onto a beam and leap out in the pitch dark to grab a clue. Almost 200 feet above the Mississippi River. James is terrified. Back at the bakery, Chee finds his baby so he and Hung can start scarfing down their beignets.

8:50 p.m. — James is sitting at the ledge of the bridge, freaking out about the plunge he’s about to take. Finally he takes the leap, successfully grabbing the next clue on his way down. He’s overjoyed as he swings from his rope under the bridge having overcome his fear. Now they must repel down the bridge and make their way to Mardi Gras World, rolling a 10-foot high ball down the street. Will & James get on the ground, grab their giant ball and head to Mardi Gras World. Hung & Chee have now arrived at the bridge and Riley & Maddison are well back in third place at this point. Will & James get to Mardi Gras World and open their next clue. They must search the warehouse for a trunk filled with puzzle pieces and attach the pieces to their ball to make a giant globe of planet Earth. Then they’ll get their final clue. Will & James find their pieces and begin to assemble their puzzle. Wisely, they studied geography before leaving home to take part in the race. They place their Earth on a float so it can be inspected for accuracy. The judge isn’t happy with how it looks, so they have to pull it down and make corrections. On their second attempt they’ve succeeded and can race to the finish line at the Superdome. Neither of the other two teams have even arrived at Mardi Gras World yet. This is a blowout.

8:58 p.m. — Hung & Chee begin assembling their globe, but Will & James are already at the Superdome. They race inside and arrive at the Pit Stop in first place, winning the $1 million prize. While on the mat, Will proposes to James to make the moment even more emotional. Nothing like a bucket of cash to put you in the mood for lifelong partnership. Hung & Chee finish in second place and Riley & Maddison finish in third. That’s the end of Season 32!