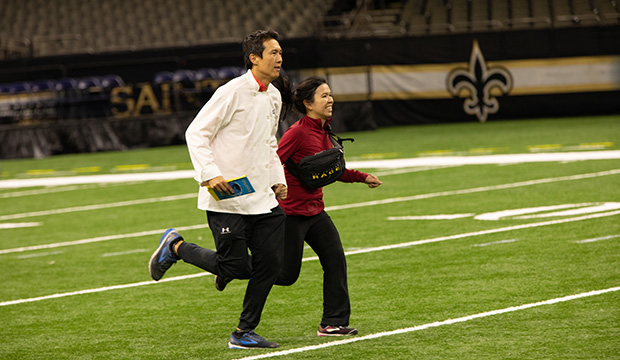 Hung Nguyen and Chee Lee were the only parents in the final three of “The Amazing Race 32,” but in the final leg in New Orleans, they got screwed by a baby. The tiny baby in a king cake was staring Chee right in front of the face for part of the Roadblock, but he didn’t notice it for a very long time. That set them far enough back that there was no catching Will and James, and the couple came in second place.

Find out below how far behind they were ultimately, why Hung wasn’t worried about Chee seeing it, and get their take on sauerkraut-gate with DeAngelo and Gary.

Gold Derby: Do you know how far behind you were you guys?
Chee: It was pretty far. We were over an hour behind. That baby killed me. [Laughs]

Gold Derby: How long were you at the cake baby task?
Chee: I would say an hour and a half at least. Seeing Will find his so quickly and just for me getting stuck and going through the cakes one time and having to re-go through them again — that was a tough one.

Gold Derby: Is it worse knowing that it was right in front of you half the time?
Chee: Yeah, it was tough, but, you know, two years have passed. I’ve made my peace with it. I’ve had a few king cakes a few times since the race. [Laughs]

SEE ‘The Amazing Race’ finale recap: And the winner is…

Gold Derby: That’s good. Hung, what was going through your mind. We saw you frustrated and  talking to Riley, saying you can’t say anything to him.
Hung: I think my emotions at the time were less frustration, but like surprise. So I saw it and I said that, and the sound people actually took us outside of the bakery to ask to see if they had heard what they thought they’d heard me tell Riley. But yeah, it was less about frustration and more about the fact that I knew that 1) the baby was there, the baby existed, and 2) that he was eventually going to find it. He was really focused, so I knew he would go through every piece of cardboard. If he had to get to a point where the workstation was too messy and he had to clean, so when he does that, one of two things would happen: 1) he would accidentally flip the baby off the table and then we’re in trouble or 2) he’d find the baby. I knew it was going to happen.

Gold Derby: As you went through the remaining tasks, did you think there was any point you could catch up? They were pretty straightforward.
Chee: Since we didn’t know what the tasks ahead were going to be like, I still had hope up until the very end. I was hoping there would be some impossible task at the finish, more impossible than the flags in the Philippines, and then we would have a chance to catch up.

Gold Derby: Were you expecting a task like the music task in the final leg?
Chee: Yeah, because historically on the final leg, that last task is almost always memory-based, so we were saving Hung for that very moment. And unfortunately it just didn’t work out that way.

Gold Derby: Do you think it was fair to have a needle-in-the-haystack challenge like the baby one in the finale because some of it is luck?
Hung: I mean, we can’t choose the challenges. Sometimes they play to our strength and sometimes it doesn’t.

Chee: I would say it wasn’t all luck. I clearly rushed through the cakes my first go-around. Had I been more careful, we would’ve been right there. It is what it is.

Gold Derby: You were in the Mine Five and the secret three-team alliance, and it worked out for you in that you made it to the finale, but do you regret going to the finale with two other very strong teams?
Chee: No, not at all. Because our philosophy was if we had aligned ourselves with a weak team and they get eliminated, suddenly we’re all alone again. Our mindset was, let’s find a way to get to the final leg, and if it means aligning with strong teams, that’s fine. We feel confident in our ability to compete and anything can happen on that final leg.

Hung: And it’s also like you want to compete with the best. So no regrets.

Gold Derby: So you wouldn’t have betrayed any of them if you had the chance to, like in the final five with the U-Turn?
Chee: No, no chance for betrayal.

Hung: And that was less about strategy and more about how we are.

SEE ‘The Amazing Race’s’ Will and James on their million dollar engagement: ‘No matter what place we came in, I was gonna propose’

Gold Derby: The previous leg, the music challenge was a struggle for all four of you. All of you were trying to do it individually as a team. When were you like, “The three of us have got to do this together and try to get out DeAngelo and Gary?
Chee: Yeah, you’re right, when that task started, it was every team for themselves. We all wanted to win that leg. But once we went through all the permutations and it was clear we weren’t gonna get anywhere, that was when we leaned on our three-team alliance. … We tried to be secretive, hiding our flags and stuff, but it’s tough to when everyone’s in the same space.

Hung: But honestly, seeing the show, people didn’t know about the secret alliance — we didn’t think it was that secret. We weren’t obvious about it, but we thought people knew already just by seeing who we hung out with.

Chee: The other thing about that challenge is, two of those songs in France, Hung was in and out of that art museum in like 2 seconds. There’s no way she would’ve heard or could’ve remembered that song. And I wasn’t even in that room because I was standing outside of the challenge. That part was frustrating. I wish they would’ve chosen songs that both team members had heard or had a chance to hear.

Gold Derby: That’s what Gary said too – he never heard the song in Paris. On the show, it seemed like you guys started targeting DeAngelo and Gary after the sauerkraut task because you felt like they weren’t contributing to the alliance. When I talked to DeAngelo and some of the other teams, they thought DeAngelo helped you, Hung, by telling you what to look for and what they were gonna ask. Did you not see it that way?
Hung: Not at all. To clear, DeAngelo and I are cool now, and we’ve had a conversation about this. But in the moment, I thought I was duped because he said, “It’s really hard. I have intel for you.” And I was like, “OK, you have my word. What’s the intel?” And he didn’t give me any intel. He said there are letters there. He didn’t tell me they had to be unscrambled or anything. He told me that his previous answer was Chuck Norris — that’s what he told me. I was a bit frustrated because I gave my word and he didn’t give me any intel. I got to the top of the roof — the letters are so gigantic. I don’t understand how I would’ve ever missed it. From his perspective, he thought he was giving me intel by telling me there were letters there. From my perspective —

Chee: It’s like, if you’re gonna tell me there are letters, why don’t you tell me what the letters are? He didn’t do that, and we thought he was withholding information, and that didn’t sit well with us.

Hung: Yes, and I felt like I completely got duped.

Gold Derby: You and Leo were the only people who unscrambled that on your own.
Chee: Yeah, and if Hung didn’t share, it would’ve been interesting to see how that would’ve played out.

Gold Derby: Do you regret telling three other teams it was sauerkraut, especially because you couldn’t find a taxi for a while too?
Hung: I think because I felt like I got duped by DeAngelo, in the moment, I felt regret there. But I don’t regret sharing it with beard bros and boyfriends because up until that point, we felt that beard bros had helped us and we hadn’t helped them, and so it was something that I wanted to square up.

Gold Derby: What happened with the cab? DeAngelo said you guys told them they could go and they didn’t know you were behind them.
Hung: So I was angry because I felt duped and when we gave them the answer, they took off rather than doing a chain-style, I told them, they would tell Riley and Maddison. When they saw we were staying, they came back, but by that time I was frustrated and didn’t think that they would actually stay if we left. When we gave the answer to Riley and Maddison, they said, “We’ll stay and give it to boyfriends, you guys go,” so that’s when we all left — us meaning us and the football players.

Chee: When we had future conversations with them, they didn’t realize there was only one cab available. They thought there were multiple, but obviously there wasn’t.

Gold Derby: They also said that they would’ve considered U-Turning you guys instead of Eswar and Aparna if you had gone to the fish Detour like you had intended. Are you grateful you accidentally went to the gardening Detour?
Chee: Yeah, and I think the sauerkraut help and the goat head help in Kazakhstan inadvertently helped us in that they didn’t U-Turn us in Cambodia. I think it just kinda worked out, thankfully.

Gold Derby: Have you played any VR games since the race?
Hung: No! Not at all. [Laughs] We didn’t play any before and haven’t played any afterwards.

Gold Derby: So your daughters aren’t gamers then?
Hung: Not in a legit gamer way. She has a Nintendo Switch, so she plays sometimes.

Gold Derby: What are you up to now? Would you do the race again?
Chee: Now is I guess trying to stay safe and quarantine, and helping our kids through virtual schooling and doing the job thing. Regular life. Hands down would do it again.

Hung: Absolutely. It was an amazing experience and it reminded us about perspective in life and always trying to seek more joy and be kinder in life. And I always think those are good reminders.