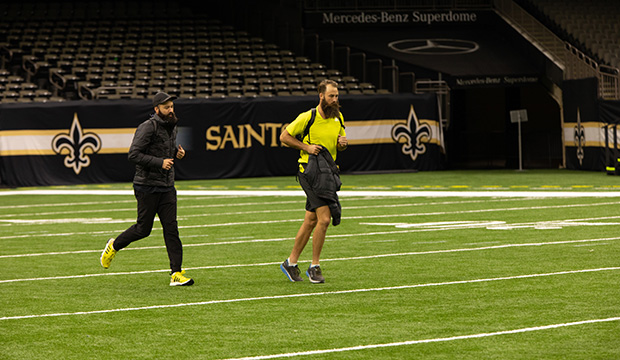 Riley and Maddison McKibbin had won three consecutive legs on “The Amazing Race 32,” including both parts of the Mega Leg, but their win streak came to an an end at the absolutely worst time. After getting lost in New Orleans in a taxi during Wednesday’s finale, the pro beach volleyball players fell even further behind when Maddison spent hours — literally — trying to find that tiny baby in a king cake. In the end, the brothers came in third behind their alliance-mates Will and James, and Hung and Chee.

But what about that other secret alliance they apparently had with DeAngelo and Gary? Get the beard bros’ side of the story below.

Gold Derby: That was a tough final leg. What was it like watching it?
Riley: It was tortuous. [Laughs] It was funny.

Maddison: It’s like rewatching you lose the national championship game.

Gold Derby: was clear from your faces you knew you were last and you were disappointed. What was that like, knowing you were last?
Maddison: You always think you have a shot in the race because you never know what to expect, but I think after the baby challenge, we were very far behind. But you’re always hoping for a challenge that might give you a chance to catch up, and unfortunately, we were so far behind, it was so defeating to us.

Riley: It was tough watching Maddison search for that baby in the king cakes. The way I described it to my family was it was like watching someone get tortured to death. You knew death was imminent, but all I could do was like be there for us, and eventually we’re both gonna die. That’s what it was like. [Laughs]

SEE ‘The Amazing Race’ finale recap: And the winner is…

Gold Derby: How long did it take for you to find the baby?
Maddison: I thought it was three hours or so. Two and a half, three hours. … I think we were about that [far behind] in the end.

Riley: We really have no idea. We were bummed we had lost and it was just kind of ironic that everyone had to wait another, like, three hours before they could all go home because of us.

Gold Derby: Was it harder to swallow because you had won the last three legs?
Riley: Oh, for sure. I don’t think we ever felt confident because anything could happen, but after three in a row, it was like, “All right, maybe we’re good racers, maybe we can do this.” We were feeling the best we had ever felt going it into this. We were like, “As long as we don’t get lost in a taxi and it doesn’t come down to some sort of luck challenge, we’re good.” And then we got lost and it comes down to a needle-in-a-haystack challenge, and that’s all she wrote.

Gold Derby: What happened with cabbie?
Maddison: We had a map of where to go and how to get there the direct way. He was following the map, but he deviated from that and ended up not knowing where the place was exactly. That’s initially what set us back, but we were able to catch up and at least be at one challenge all together, which was the beads. Ultimately, it was the king cake and trying to find the baby that separated all three teams.

Gold Derby: How long were you lost for?
Riley: I feel like we probably showed up at the beads 25, maybe 30 minutes after Will and James. The frustrating part about the beads was that there was no way for us to catch up. It was a time thing. We couldn’t take our shirts off to get more beads, you know? [Laughs] The beads would only come out once every 30 seconds. We couldn’t catch up, and it just so happened that the team that was in first also found the baby the fastest. And that was it. The race ended right there, which was such a bummer because the whole race was a test of brain and brawn and travel and whatever. And it comes down to essentially a blindfolded, needle-in-the-haystack challenge, and whoever’s luckiest wins.

Maddison: If we were to lose, I’m happy it was to Will and James. We love those guys. It gave them an opportunity to propose.

SEE ‘The Amazing Race’s’ Will and James on their million dollar engagement: ‘No matter what place we came in, I was gonna propose’

Gold Derby: Which you missed.
Maddison: Which we missed, but they had been talking about it.

Riley: I called them and was like, “I can’t believe you didn’t wait for us!” [Laughs] We’re still very good friends with Hung and Chee, and Will and James.

Gold Derby: Did you expect the leg to have something more like the music challenge the last leg?
Maddison: Maybe not that one exactly, but a few more. It was really just the globe that was a test of a skill or intellect, but it was just like when you fell behind in this one, it was really hard to catch up at anything except that one challenge. … If all things were equal, it would’ve come down to that globe challenge, but that leg, without the baby, I thought it was very well planned and it was a show. It was like being part of his Hollywood show. We just got stuck finding that freakin’ little baby.

Gold Derby: So no regrets sticking it out with an alliance with two strong teams instead of trying to get one of them out?
Maddison: No, the whole race, we looked at it like, every single leg, you’re not racing for a million dollars; you’re only racing for the million dollars in the final leg. Riley and I — our whole goal was, what can we do to get to the final leg? In all the other legs, you’re racing not to get last. We made an alliance with Will and James, and Hung and Chee because we got along with them the most. We stuck to our word.

Obviously, “The Amazing Race” was the most incredible experience, but the Pit Stop in the Philippines, for all of us to get there and stick to our word, it was something we’re very proud of and a very emotional moment. … We had such a good relationship. We were all competitive, but we also had respect for one another and said, “May the best team win.” Riley said it best: we love competing against our best friends. Unfortunately, things didn’t go our way.

Riley: I also think that even if we had we brought the two weakest teams to the final, we still would’ve lost. Three hours of the baby thing? Anything could’ve found the baby.

Gold Derby: DeAngelo and Gary said you guys had a secret side alliance that we never saw, so they felt particularly betrayed by you last week. What is your side of the story?
Maddison: Gary is correct.

Riley: I wasn’t there.

Maddison: You weren’t there. I approached Gary, and they dramatize it because they’re trying to start a podcast. [Laughs] I approached Gary because they’re football guys and I looked up to them and loosely asked, “Hey, you wanna help each other out and start and alliance?” And DeAngelo wasn’t even looking at me. It was kind of wishy-washy, but OK, I think we’re on the same page. And then Will and James approached us, and it was like, wow, this is a legit alliance. We just felt that, the same thing with Hung and Chee. The thing that Gary and DeAngelo don’t really get is that throughout a lot of legs, they didn’t help. They actually took more, they received more. Regardless of if you make this wishy-washy alliance at the start, if you don’t give to this relationship, then the relationship is going to end. And that made our bond with Will and James, and Hung and Chee so much stronger. So for them to say we backstabbed them really makes no sense.

Riley: I understand why they feel that way because they didn’t know about our true secret alliance we had forged at the end of Colombia. But really, we were just holding true to our actual alliance.

SEE ‘The Amazing Race’s’ Hung and Chee: ‘That baby killed me’

Gold Derby: What was going through your mind when they beat you by mere seconds to the U-Turn board?
Maddison: [Laughs] We got there right before them, but we saw them right behind us. When we were in the boat, Riley was like, “Dude, we cannot U-Turn them. They’re gonna throw us in the water.” And the place was called the Crocodile Pit or something. It was almost better they got there first.

Riley: I remember thinking, “I really don’t want to find this U-Turn board,” and they found it first.

Maddison: We were like, “You’re gonna U-Turn Eswar and Aparna, right?” And we have nothing against them, but Will and Jame, and Hung and Chee were in our alliance and we had no idea they were at this challenge that was taking so much time. So we let Gary and DeAngelo U-Turn Eswar and Aparna. Not let them, but, you know, “good call.” And then we burned the board because of our alliance and that’s why Aparna was so frustrated with us because no one knew about the alliance until really the Pit Stop in New Orleans.

Riley: [Eswar and Aparna] were just as mad at us, but we got out of the tiles before they got there.

Gold Derby: Who has the better beards: you or the blonde bandits?
Maddison: Ooh, theirs looked really good, I gotta give it to them. Looked super natural. [Laughs]

Riley: They give good beard bumps.

Gold Derby: And then you yielded them.
Maddison: [Laughs] Yes, OK, let us explain that. We love the blondes, absolutely love them. The reason why we did was because it was a Mega Leg, and Hung and Chee got so behind, and we hadn’t seen them in so long. … Just in case they got stuck somewhere, we just had to yield the blondes. That was our rationale. People say, “Why wouldn’t you yield Gary and DeAngelo?” We could’ve yielded them 10 times and it wouldn’t have made a difference.

Gold Derby: Yeah, and the blondes were so far back too. Low-hanging fruit.
Riley: I remember doing that and thinking, “America’s gonna hate us.” But we gotta do it to hold true to our alliance. They were great, they were awesome. They had nine lives, honestly.