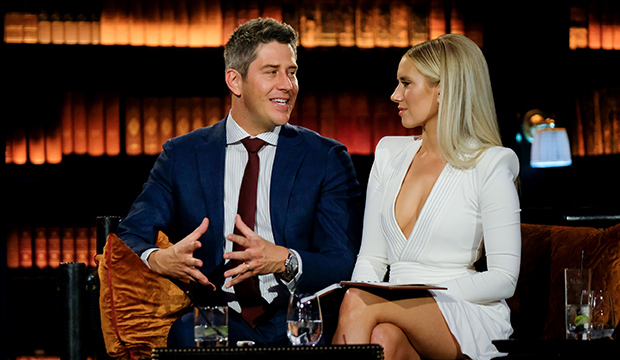 Arie Luyendyk Jr. found love on “The Bachelor,” but he is definitely not surprised that there are far more breakups than marriages in the franchise.

“It’s such a difficult — I hate to call it process — but it is a difficult show,” the Season 22 alum said on Shawn Johnson and Andrew East‘s podcast “Couple Things with Shawn and Andrew” podcast. “And that’s probably why you find that a lot of people don’t make it is because it’s just so taxing emotionally. It’s not natural to have two people that you [have] at the end, and then have to break up with one person and get engaged to another person an hour later. It’s just so weird. It’s, like, no wonder it barely works.”

Luyendyk’s comments echo those of his last month, when he said the that the leads are “set up to fail” because of the structure of the show. To date, Sean Lowe is the only Bachelor in 24 seasons who is still with his final pick; he and Catherine Giudici are married with three kids.

SEE Arie Luyendyk Jr. says ‘Bachelor’ stars are ‘set up to fail’: ‘They’re not really thinking about the Bachelor’s heart’

While Luyendyk met his wife, Lauren Burnham, on the show, any Bachelor Nation fan knows it was hardly a straight line to that happy ending. The race car driver dumped Burnham and proposed to Becca Kufrin on the finale, but later had a change of heart and pulled a Jason Mesnick. The two, who recently announced they suffered a miscarriage, wed last year and have a 1-year-old daughter, Alessi.

Luyendyk shared that he didn’t think Burnham was interested in him at the beginning of the 10-week production, which played a part in his finale flip-flop. “So I kind of let other relationships develop and then it got toward the end and I was like ‘Oh dang! She actually really likes me,'” he recalled. “And then it was just like, our relationship bloomed so late in that whole ‘Bachelor’ world that that’s why the ending got a little mixed up.”

“I feel like it takes time to build trust too,” Burnham added. “So you kind of pick whatever feels the most comfortable and you can put most of your faith in at the end, and it’s just so hard to do that in such a short amount of time.”