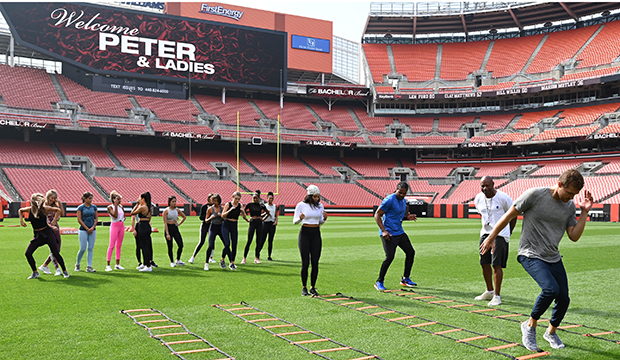 Cleveland rocks! The women said goodbye to the mansion for the final time this season on “The Bachelor,” traveling to Ohio to mingle with Peter Weber for some fun on the gridiron while coping with a shocking return, resetting the entire playbook.

Upon arrival, Victoria F., a standout in Week 2 during the runway challenge opposite frontrunner Hannah Ann, received the first one-on-one date. Although afraid of heights, Victoria took to the skies with Peter for a flight to nearby Cedar Point Amusement Park, where a blast from the past rocked their time together. After enjoying a few rides, they were sweetly serenaded by country star Chase Rice, who was revealed to be Victoria’s ex-boyfriend. She broke up with Chase shortly before coming on the show, and more interestingly, she mentioned he was against her being on the show altogether.

After Peter and Chase’s backstage chit-chat, Victoria and Chase reunited to set things straight (Chase deserves a lot of credit for not spilling the beans to Peter). Both acknowledged their shared awkwardness but departed on good terms. At dinner, a visibly nervous Victoria told Peter the truth, and he was so emotional that she left their table and cried in a corner. However, Peter, believably shocked, respected her honesty, and gave her the date rose, cementing her status as a rising favorite.

Next, a football group date at First Energy Stadium included Victoria P., Kiarra, Kelley, Hannah Ann, Deandra, Madison, Lexi, Savannah, Shiann, Tammy, Sydney and Mykenna. Victoria, citing back issues, stayed on the sideline with Peter, which may or may not have been merely a ploy for quick cuddle time with him. The Bachelor Bowl humorously pitted the Eliminators against the Killer Bees. Surprisingly, Shiann of the Eliminators had her best moments thus far this season, scoring big plays as the unofficial MVP to Peter’s excited approval. The game ended in a tie to the disappointment of the Eliminators, who had been strong from the outset and was hoping for quality time with Peter themselves.

SEE Is Kelley’s advantage on ‘The Bachelor’ bad or is all fair in love and reality TV?

At the cocktail party, the ladies were thrown for a loop when Alayah, eliminated last week, showed up out of the blue, basically telling Peter she felt misjudged. She stood by the fact she was actually friends, not merely pageant acquaintances, with Victoria P., putting Victoria P.’s motives into question. Is Alayah telling the truth? Can Victoria P. be trusted? Caught in a serious bind, Peter invited Alayah to join the ladies for an explanation of his actions, which led to his jaw-dropping decision to bring her back and give her the group date rose.

Unsurprisingly, his decision didn’t go over well, especially in the eyes of Hannah Ann, who rightfully felt Alayah shouldn’t have received the rose because she wasn’t a part of the date and didn’t have the bruises to show for it. Making matters worse, Alayah told a few ladies about events on the outside, particularly the fact that she found out about Chase and Victoria F.’s relationship on the internet. Victoria F., who had already dubbed Alayah “the center of drama,” was, of course, furious. She called her out for not keeping quiet, fueling tensions.

The second one-on-one date went to Kelsey, who took the news of Alayah’s return in stride, which pleased Peter. After touring the city, taking in an impromptu polka party and soap box derby, Kelsey really opened up over dinner. She explained how her tough exterior is an extension of the pain surrounding her parents’ divorce and her upbringing. Peter appreciated her vulnerability, giving her the date rose and placing her in a more positive light than in past weeks.

At the cocktail party, Peter endured a revolving door of grievances surrounding Alayah, especially from Victoria P. and Deandra. It’s a completely messy situation and no one knows how he’s going to clean it up. Next week’s rose ceremony will be pivotal. To be continued!