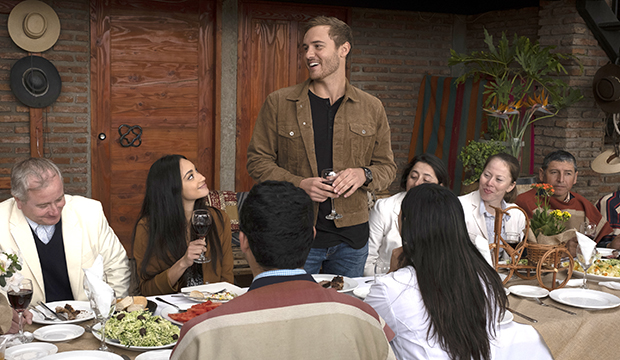 Pilot Pete and the ladies used their passports for the first time this season as the bulk of Episode 5 of “The Bachelor” centered on fun, romance and drama in Costa Rica. But first, a major mess from last week’s episode in Cleveland had to be cleaned up.

After Peter Weber’s startling decision to give the eliminated Alayah a second chance, he backtracked, especially with so many ladies concerned about the trust that had been lost with such a huge move. After a heart-to-heart with Alayah, Peter let her go, admitting soon after to the group how wrong it was to have brought her back in the first place. At the rose ceremony, Deandra, Kiarra and Savannah were eliminated. Of the three, Deandra was the most shocked and rightfully so. There seemed to be a connection brewing, but perhaps it was just too little too late.

In Costa Rica, details and scenes of Peter’s much talked-about October face injury were revealed. Before the ladies arrived, he accidentally ran into a golf cart and injured his forehead while holding a glass. The cut was so serious it required 22 stitches. But all was well by time the ladies gathered at the resort. Sydney received the first one-on-one date, a helicopter ride with gorgeous views of waterfalls and the jungle, followed by a picturesque picnic. Her biracial upbringing, especially her experiences growing up in a single-parent home and enduring racism in Alabama, was a pivotal moment of honesty, but the date will likely be remembered for their steamy chemistry, climaxing with Peter’s revelation that she’s the best kisser.

At the group date, Shiann, Kelsey, Victoria F., Madison, Natasha, Victoria P., Lexi, Hannah Ann, Tammy and Mykenna enjoyed a scenic “Cosmopolitan” magazine photo shoot competition. Victoria F., a vision in red, won the opportunity to appear on a future cover with Peter. Curiously, she didn’t receive the group date rose, which instead went to Hannah Ann, a professional model who memorably defeated Victoria F. on the runway in Episode 2.

The second one-on-one went to Kelley, who started out strong this season but has surprisingly begun to fade. Peter said he needed to “see a lot from her” based on an initial spark that he says had now plateaued. The date was centered on their love connection and spiritual energy, which revealed Kelley’s tendency to feel repressed. When Peter confronted Kelley with serious questions about their path forward, she revealed her uncomfortableness with the process, which he took in stride, ultimately giving her a rose with the hope of regaining their spark.

The biggest drama of the night was between Tammy and Kelsey. The reliably outspoken Tammy took issue with the highly emotional Kelsey (who admitted she was “proud of crying in front of people”) for exhibiting a mental breakdown. She even went so far as to accuse her of excessive drinking, which Kelsey firmly denied. Taking matters into her own hands, Kelsey snuck away from the pack to talk with Peter and share her side of the story. His dislike for bullying is no secret, so it wasn’t entirely shocking he gave Kelsey a rose for being so open and honest.

Even so, his decision didn’t go over well with the ladies, who were quickly thrown for another loop when host Chris Harrison showed up to tell them Peter had clarity and there wouldn’t be a cocktail party. Without sufficient alone time, anyone could go home, which particularly infuriated Mykenna. At the rose ceremony, Tammy and Mykenna interrupted Peter before he made his decisions, further fueling suspense. In the end, Lexi and Shiann were eliminated.

You won’t have to wait another week for the next episode. On Wednesday, Peter and the remaining 10 women travel to Santiago, Chile. Will Hannah Ann remain the frontrunner? Can Tammy overcome a cloud of negativity? Tune in to find out!