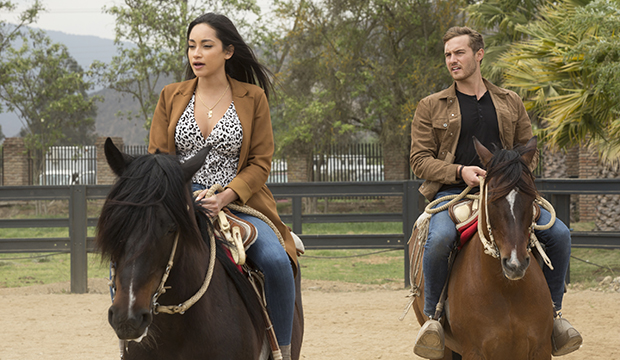 Peter Weber and his final four embarked on the always exciting and unpredictable hometown dates this week on “The Bachelor,” but a few parental concerns and a particularly dire warning from Peter’s ex-girlfriend set the stage for a roller coaster of emotions.

In Knoxville, Tennessee, Hannah Ann quickly reminded Peter of the importance of impressing her dad, a forester nicknamed “Ranger Rick.” After a few rounds of humorous ax-throwing to help loosen him up, Peter, touched by Hannah Ann’s surprising love letter last week, took her aside to present his own “Things I Love About You,” basically cementing her frontrunner status. When the time came for Peter to chat with Rick, intentions were questioned. Peter told him he planned to finally tell Hannah Ann he was falling in love with her, but Rick, as the ever-protective father, squashed the idea. He didn’t want Peter to go down that road unless he really meant it, putting Peter in a bind. Even so, Peter told Hannah Ann anyway, confirming his feelings and allowing him to be pleased with her validation in return as situations intensify heading into the final weeks.

In Des Moines, Iowa, Kelsey entertained Peter at a local winery, where they enjoyed stomping grapes and making their own blend of wine. In fact, Peter went so far as to use the wine metaphor to describe their relationship: “Not bland, sweet, lots of flavor, very bold, a hint of spice, and an aftertaste always leaving you wanting more.” Kelsey, whose honesty has always been one of her best traits, admitted her regret of not telling Peter she was falling in love with him while in Peru, but was glad to finally tell him so there wouldn’t be any doubts as to where she stood. While alone with her stepdad, a tearful Kelsey revealed how scared she was to have a broken heart but would be ready to pick up the pieces if need be. Her confession gave credence to the harsh reality that comes with the hometown dates. Heartache always lurks around the corner, so be prepared.

In Auburn, Alabama, Madison took Peter to Auburn University, where her father, Chad Prewett, serves as director of operations for Auburn’s basketball team. At Auburn Arena, Auburn head coach Bruce Pearl and Auburn alum and NBA legend Charles Barkley (via video) greeted the duo. After Madison showed Peter some fun basketball moves overseen by Pearl, it was time to meet the family. Tonya, Madison’s mom, wondered if Madison told Peter about her decision to remain abstinent until marriage. She said she hadn’t but planned to soon. Chad asked Peter if he knew for sure if Madison was The One, but again, Peter was put in an uncomfortable situation and couldn’t make any promises.

Although she admitted entering the date feeling giddy, Madison faced the fact that her relationship was full of “many nerve-wracking unknowns.” At the same rate, Peter felt Madison’s parents gave him a grilling, placing doubts in his head for the first time. Going forward, it’s clear Madison’s convictions will absolutely test the strengths of their relationship.

In Virginia Beach, Virginia, Victoria F. attempted to reset her rocky relationship with Peter. Following a stroll through an old-time photo shop and a concert by country star Hunter Hayes, all seemed well until Peter caught the eye of a mystery woman named Merissa. It turns out that Merissa, whose face was blurred, was not only Peter’s ex but one of Victoria’s former friends who knew all about some of the relationships she destroyed in the past. Obviously taking Merissa’s comments to heart, Peter decided to tell Victoria about what she said before visiting her family. Shocked, disappointed and infuriated, Victoria once again walked away from Peter in tears, ultimately ending the date in the driveway. As Peter drove off, Victoria’s family came outside to console her in one of the most memorable and dramatic moments of the season.

The next day, Victoria visited Peter in his hotel room to chat about the fallout. He asked why she keeps walking away from their relationship, but Victoria turned the question around to rightfully acknowledge the ball is in Peter’s court. In other words, it’s his decision to make no matter why or when emotions spiral out of control. Before leaving, Victoria told Peter she was falling in love with him, but it was apparent she felt their relationship was completely up in the air.

Back in Los Angeles at the rose ceremony, Peter eliminated Kelsey, a huge surprise considering Victoria’s hometown date was a disaster. After Peter announced he was whisking the final three away to Gold Coast, Australia, for fantasy suite week, Madison asked if she could speak with him, presumably prepared to reveal all. Things are heating up as next week’s episode puts Hannah Ann and Victoria in a prickly position due to Madison’s ultimatums.