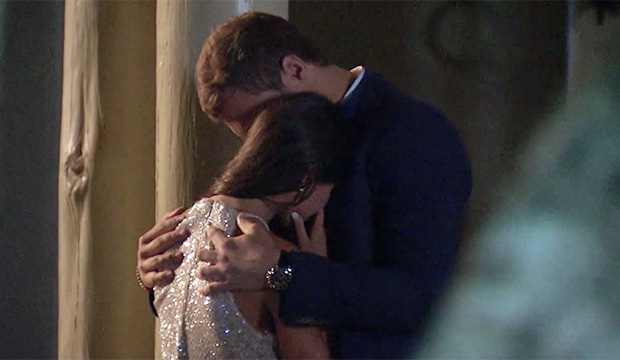 Fantasy suite week always comes with the highest expectations in any “Bachelor” season, but Madison’s ultimatum to Peter Weber took the drama to another level.

Picking up directly from last week’s cliffhanger, Madison pulled Peter aside to explain her decision to save sex for marriage, going so far as to warn him if he is intimate with the other ladies, she may not be able to continue their journey. Peter respected her convictions but was unsurprisingly torn. How in the world does he juggle Madison’s wishes with his own desires to know his future wife intimately? The process is not just about Madison, right? She knew this before signing up, right?

In gorgeous Gold Coast, Australia, the final three were taken aback by the fact they had to live together but took the news in stride. Hannah Ann received the first date, a fun-in-the-sun jet ski outing, leading to another beautiful dinner during which Peter finally told her that he loved her. He reminded her he wouldn’t have said those words if he didn’t mean it, respecting her father’s wishes. In the fantasy suite, Hannah Ann and Peter kept things hot, climaxing with confirmation that it was Hannah Ann’s arm on the steamy bathroom door after all.

Victoria F. came into fantasy week on shaky ground once again. Last week’s blowup between her and Peter outside her family home negatively affected their momentum. Before their latest date, Peter admitted he had reservations about her, but still said he trusted her despite the troubling news he received from his ex-girlfriend Merissa. “She’s an amazing person with a great heart,” he said, specifically giving their passion high marks.

After a picturesque helicopter ride to the Gondwanda Rainforests, they had a productive heart-to-heart chat over dinner and were determined to get back on the right path. Peter was particularly strong about needing to feel “100 percent confident” that Victoria wouldn’t continue to get “pissed off” and walk away every time she’s uncomfortable being questioned. She agreed, leading viewers to believe she was absolutely content to have found the love of her life and would try her hardest not to let him go. We shall see.

Madison’s excursion with Peter began 90 stories outside a city skyscraper, testing their adventurous spirits. But after the death-defying excitement, it was time to get serious. At dinner, Peter, nervous yet honest, admitted that he had been intimate with the other ladies. Devastated and shaken, Madison immediately left the table to figure out what she was going to do next. She felt particularly betrayed by Peter’s decision, the fact that he didn’t put enough trust in what they had built together. In her eyes, if Peter felt she was The One he wouldn’t have gone as far with the other ladies, especially putting at risk her future status on the show. She left him in tears.

Madison’s ultimatum, referred to as “madness” by Hannah Ann, is a prime example of how “The Bachelor” can shift on the drop of a dime depending on personal beliefs. Madison’s views are in stark contrast to those of her competitors. Victoria notably said being intimate was a significant factor in order for her to see if Peter is a good fit due to the prospect of “waking up beside him every day.”

Next week, the fallout around Madison will be combined with the Women Tell All! Prepare for drama on both ends, especially the feisty return of Tammy!