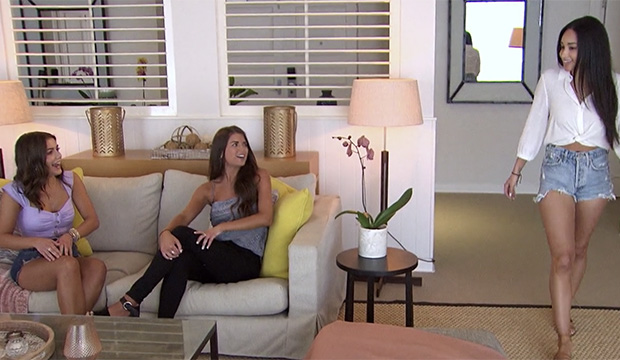 Twenty-four seasons in and “The Bachelor” still has some firsts. For the first time, the final three ladies had to live together during fantasy suite week on Monday’s episode as opposed to each getting her own hotel room. The change seemed like a shameless tactic to maximize drama since Madison had just told Peter Weber that she wouldn’t be OK with him sleeping with Hannah Ann or Victoria F. But Chris Harrison claims TPTB had a legit reason for the awkward switch-up.

During his interview on the “Bachelor Happy Hour” podcast, hosted by Rachel Lindsay and Becca Kufrin, Harrison pointed to Peter’s infamous indecisiveness this season as a major factor. “Peter has trouble making decisions. I don’t know if you guys have noticed that,” he joked. “The king of kicking the can down the road. Heaven forbid you make a decision.” Harrison acknowledged, as part of the reality show machine, producers will do things to “force you into this uncomfortable zone and force you into making a decision.”

“Sometimes we do it for your behalf, sometimes we do it for the Bachelor, the guys or the girls,” he explained. “And this situation was pretty extraordinary because Peter had kicked the can down the road, but this time also Madison had. This was to force a situation that had to happen, and it had to happen this week because if we get to proposal week, then this guy is really screwed and there’s no chance this works. We gotta figure this out and there’s really only one way to do it. Yeah, it was tough love and it was really awkward … but we decided to do it this week because these are conversations that needed to be had.”

The beginning of Monday’s episode showed the conclusion of Madison and Peter’s conversation after she had asked to speak to him in the episode prior. She told him she wanted to be honest with him and that she would have trouble moving forward if he were to sleep with someone during fantasy suite week, but she didn’t want to give him an ultimatum. During their date, she told him she didn’t believe in sex before marriage, while Peter admitted that he was “intimate” with Hannah Ann and Victoria.

Meanwhile, in their suite, Madison had already revealed her “expectations” for Peter to Hannah Ann, who later informed Victoria. Both ladies were surprised and confused, to say the least. But that was also what producers were looking for, according to Harrison.

“It was because of, I think, the double standard in the things that Peter was gonna deal with. We kind of needed the women’s perspective on this,” he said. “We needed Madison to face Victoria and Hannah Ann and have them express their emotions on this because, again, it’s just this guy and his perspective, and I don’t know if that’s the greatest thing right now.”

After Madison excused herself from their date, Peter apologized and begged her to stay, but she walked away as we’re left with another cliffhanger. The trailer suggests that Madison is a no-show to the final rose ceremony, but Harrison shared that there is much more that will unfold. “I feel like the season has barely started, honestly, considering what’s about to happen in the final week of this show, which is wild to say,” he teased.