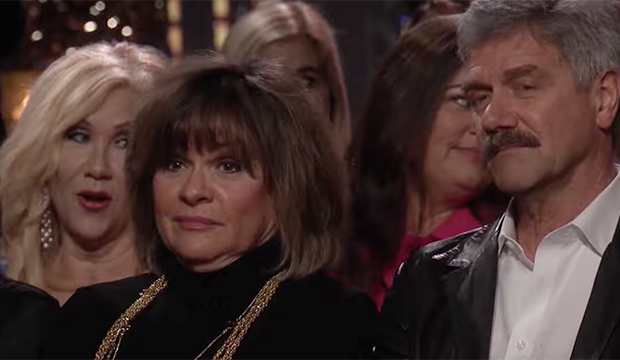 After Monday’s episode of “The Bachelor,” we all knew Peter Weber‘s mom Barbara was not Madison Prewett‘s biggest fan (on the contrary, she was Hannah Ann Sluss‘). So it was not entirely surprising that she wasn’t completely onboard with her son dumping Hannah Ann to reconcile with Madison, but no one — not even TPTB — predicted the sheer venom Barb would unleash at the couple on the live “After the Final Rose.”

“We knew that she was not necessarily thrilled that Peter had reconciled with Madison, but this was truly a little bit scary because it was live and nobody knows what she’s going to say, but at the same time, that’s what makes for great TV,” Rob Mills, ABC’s head of alternative programming, told our sister site “Variety.” “But I don’t think anyone knew she would go that far.”

Barb didn’t even bother with a poker face on the show as she laid into Madison for her uncompromising values, being three hours late to meet the family in Australia, not embracing her as warmly as Hannah Ann did, and not being ready to accept a proposal from Peter in four days. But the killshot came when Barb told her son and his girlfriend to their faces that “everyone knows it’s not going to work,” and that Peter is “going to have to fail to succeed.”

Peter’s only defense to his mother during this whole exchange was that he loves Madison, and “that should be enough.”

“We all want love. We all want to find that person and want to be with someone. And the fact that the family does not get along with the person you’ve chosen to be with is also something that many people deal with,” Mills added. “Family dynamics is always something you have to deal with. I think everybody saw some scenario in their life than rang true while watching that.”

Despite the tense interaction, the exec is glad it played out on TV, not just from a buzz-y TV perspective, but now fans will have a fuller picture of the situation. “I think it’s going to be difficult with Peter and Madison, so I’m glad that everybody saw these dynamics on TV, so that if they don’t work out, it played in front of the audience,” Mills said. “When you sign up for this show, you sign up to bring the audience with you on this journey.”

But that doesn’t mean we’ll be seeing or hearing from the couple any time soon. Peter and Madison eschewed the usual post-finale press tour, and ABC has no plans to continue filming them unless it’s “warranted.” “I think, right now, they deserve their privacy,” Mills said. “But of course we’ll check up on them. If there’s something that warrants us filming, we would love to be there.”