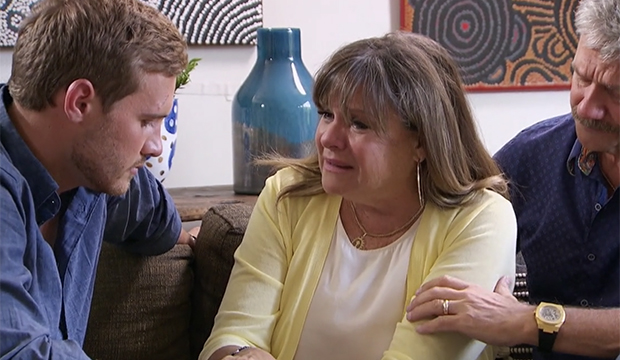 Peter Weber and his final two were completely conflicted in the Australian outback during Part 1 of the dramatic season finale of “The Bachelor,” but no one was more emotional than his devoted mother Barbara, whose deep feelings surprisingly raised the stakes.

Peter’s opening description of the outback as “beautiful, scary and unknown” set the tone for the episode, acknowledging the ensuing unpredictability. Prepping Barbara, his dad Peter Sr. and brother Jack to meet Hannah Ann and Madison, Peter reminded them the duo were his special firsts: Hannah Ann received the first impression rose and Madison received the first one-on-one date. He recognized Hannah Ann for her “pure, beautiful innocence,” as well as being the most similar to him. He revealed that Madison was the first person he fell in love with this season.

Frontrunner Hannah Ann met the family first, and it was quickly evident how impactful Barbara’s views would become throughout the episode. Although Barbara described Hannah Ann as “breathtakingly gorgeous” and Peter Sr. remarked how “good-hearted” she seemed, Barbara was still concerned about Peter’s ability to fall hard for someone fast, especially since he did the same with Hannah Brown on “The Bachelorette,” which ended with an unfortunate outcome. It was obvious Peter’s family didn’t want to relive his heartbreak vicariously again.

Next, after Peter’s quick chat with Madison, during which he hoped she would fight for their relationship, he reintroduced her to his family, whom she hadn’t seen since attending his parents’ vow renewal ceremony. Madison’s ultimatum was still a prickly point of frustration. Jack was concerned that his brother was being compromised, which Peter vehemently denied. Barbara asked Madison how she felt about being with someone who was on a different spiritual level than her, especially since she knew Peter enjoyed partying every now and then. However, Madison stuck to her convictions, irritating Barbara, who told her she hopes she finds the right person to fall in love with, clearly implying it wasn’t her son.

When Madison left, the family did their best to get Peter to see their perspectives of the final two. Barbara found Madison to be a “sweet, lovely girl” but felt Hannah Ann was “an angel on Earth.” In fact, Hannah Ann was the mysterious “her” of Barb’s meme-worthy teary plea: “Hannah Ann loves you with all of her heart! Don’t let her go! Bring her home to us! We will welcome her with open arms! We will welcome her with all the love in the world!” Peter, not entirely moved by his mother’s tears, was very disappointed his family didn’t seem to feel the same way about Madison.

The next day, after Peter treated Madison to a picturesque helicopter ride around the outback, it was time to get real. Madison simply couldn’t continue her journey knowing the hurt she felt from Peter’s unwillingness to respect her values. She left the show, saying that “walking away from someone you love is the worst feeling in the world.”

Before heading on a final date with Hannah Ann, Peter, who said he didn’t want to surrender despite Madison’s exit, was approached by Chris Harrison, telling him how “totally torn” he was about what had occurred. Nonetheless, he built his spirits up enough to enjoy his time with Hannah Ann at an adorable kangaroo sanctuary.

After snuggling with a few kangaroos, Peter reminded Hannah Ann how much he appreciated her and her unwavering support, particularly the fact that she never pressured him. Back at her hotel room, Hannah Ann was prepared to tell Peter how much he really meant to her, but was thrown for a loop when he admitted his heart was pulling him in two different directions. Ouch! He reiterated that he wanted to be truthful, but his comment pushed her to her breaking point.

It all ends Tuesday! Madison returns, Barbara returns, Chris promises a “mind-blowing” finish, and Clare Crawley appears to discuss her thoughts on becoming the next “Bachelorette” star. Stay tuned!