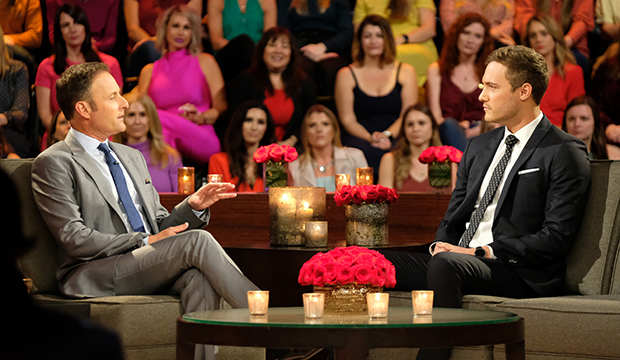 Pilot Pete’s high-flying quest for love ended on “The Bachelor” with a startling thud, although a glimmer of hope remains even if his actions threaten to tear his family apart.

Part 2 of the incredibly emotional season finale opened positively with Peter Weber, having made peace with Madison’s departure as best as possible, moving forward with confidence that Hannah Ann was his one true love. Neil Lane stopped by to showcase his collection of engagement rings and Peter took time to call Hannah Ann’s dad for his blessing to seal the deal.

All seemed perfectly fine until it was revealed that Hannah Ann felt troubled about Peter’s comment that “his heart was being pulled in two different directions.” It just didn’t sit well with her, so much so that Chris Harrison told an excited Peter he wasn’t sure Hannah Ann was coming to the final rose ceremony. The thought of Hannah Ann having second thoughts about being engaged sent Peter in a tailspin. However, she arrived after all, putting the ensuing proposal into heartwarming motion. Peter praised her “beautiful spirit” and for being so “thoughtful, caring, selfless, and passionate.” Hannah Ann gleefully accepted his proposal and everything seemed right with the world. Peter soon shared the big news with his family, who were thrilled, especially his ecstatic mother Barbara, but things took a drastic turn back in Los Angeles.

In the month following the final taping, Peter began to have second thoughts about his engagement. Ouch! When Hannah Ann stopped by his house to visit and reconnect with him, he revealed his sudden change of heart, leaving her devastated and furious. Fast-forward to the present, Hannah Ann spoke her truth with Peter and Chris on the live “After the Final Rose.” She scolded Peter for blindsiding her, for not telling her the full details about his feelings for Madison. Had she known she would’ve tapped into her instincts suggesting he wasn’t truly ready for a commitment with her. She was particularly disappointed that she didn’t pick up on the apparent red flags: Peter needed closure with Hannah Brown and he was still in love with Madison. Her final words: “If you want to be with a woman, you need to become a real man.” Throughout Hannah Ann’s segment, ABC had a camera directly pinpointed on Barbara, who was very upset and heartbroken.

Next, Chris told Peter he recently visited Madison at her home in Auburn, Alabama, to inform her of his breakup with Hannah Ann. He asked her if she still loved him and she said yes. Her feelings for him simply hadn’t gone away. In fact, if there were the possibility of a second chance, she said she’d take it in a heartbeat, which she did. In Los Angeles, Peter, expecting a visit from Chris, was surprisingly met by Madison. It was their first meeting in three months. Peter admitted he made a million mistakes but recognized he hadn’t fallen out of love with Madison.

On the live show, Peter and Madison stated they were still in love with each other. Understanding there was “a lot of healing to do,” they hoped to take their relationship step by step, one day at a time. Throughout this exchange, Barbara was visibly frustrated. When Chris asked Barbara how she felt, she shockingly spilled the tea. In addition to revealing she and her family waited three hours for Madison to meet them in Australia without an apology, Barbara didn’t like the fact that Madison said she wouldn’t accept a proposal in four days and the fact that she never said she was madly in love with Peter. “It is what is,” snapped Madison. Barbara ultimately told Chris that Peter is “going to have to fail to succeed,” which drew boos from the audience. In the end, Chris wished Peter and Madison well, with the hope that their relationship will work out for the best, resulting in one of the most uncomfortable departures in franchise finale history.

As tradition, the episode brought out the new Bachelorette, Clare Crawley, who feels optimistic and empowered as she prepares for her upcoming “Bachelorette” journey, premiering Monday, May 18.

What an amazingly unpredictable season it has been for Pilot Pete, his ladies and Barbara. What were your favorite moments?