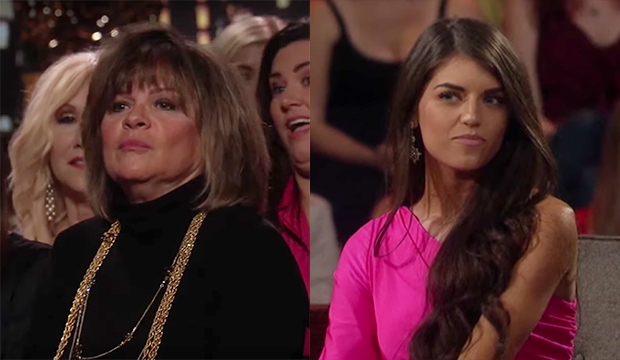 As Peter Weber‘s mom Barbara made it abundantly clear on Tuesday’s “After the Final Rose” following “The Bachelor,” Madison Prewett is the bane of her existence. She absolutely despises her and wants her son to wake up and smell the roses (no pun intended). She explained that she can’t stand the 23-year-old because she kept the family waiting for three hours in Australia before they met and didn’t apologize, and then was cold and distant. She made it sound like Madison was throwing a hissy fit and didn’t want to meet them, but according to Chris Harrison, there was a good reason Madison was late — and she wasn’t the only one to blame.

“Them being late was just as much on Peter as it was Madison,” the host said on “On Air with Ryan Seacrest” on Wednesday (listen below). “The reason they were late [was because] they were having a discussion out front and they were having a discussion of, ‘Are they going to do this? Are we even at the stage where we should meet your parents?’ That discussion was between the two of them, so it wasn’t Madison just throwing a fit. It wasn’t Madison just doing her makeup and being late. It was Peter as well.”

Like everyone, Harrison was stunned at the level of vitriol Barb directed at her son and Madison on live TV. Among her stinging barbs (sorry, had to): She told them that “everyone” knows they’re not going to work out, and Peter needs to “fail to succeed.” “I honestly don’t know what rubbed her the wrong way,” Harrison said. “I did not see Barb coming. I knew Barb wasn’t happy. I could tell by her body language and by saying hi to her, so I knew she was in a bit of a mood. But I did not understand how angry she was going to be with her son, with Madison — the whole thing.”

As a parent, Harrison says he understands Barb’s “passion,” but believes she mishandled the situation. “In my opinion, there’s ways to be right and be wrong at the same time,” he stated. “And I’m not saying she’s wrong with what she was saying, but was she really right in how she did it? Maybe that wasn’t the time and place.”

Peter definitely did not expect that brutal attack from his own mother either. The pilot was “visibly upset” after the show ended, according to Harrison. “When you have the wherewithal to actually look at your mom and say, ‘Mom, please stop. I love this girl’ — I really kept trying to turn the page for Barb and say, ‘Look, can’t we get past this? Let’s just wish the best for them and whatever happens, happens,'” he added.

And no, Harrison does not have any tea on what’s next for Peter and Madison. “I don’t know where it goes from here. I know Peter was extremely upset and so was Madison. I don’t know how Peter goes home. I fully expected to see him on my porch last night,” he quipped.

'America's Got Talent' episode 4 recap: Were there any Golden Buzzer acts on June 22? [UPDATING LIVE…