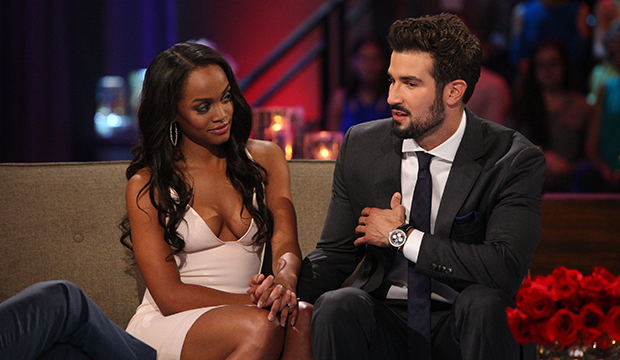 “The Bachelor: Greatest Seasons — Ever!” looks back at some of the most memorable editions in “Bachelor” and “Bachelorette” history. So, naturally, you’d assume that one of the 10 highlighted seasons will be Rachel Lindsay, the first black lead overall who’s been leading the charge in recent weeks for the franchise to fix its diversity problem. But according to Nick Viall, Lindsay’s season won’t be featured at all.

Don’t worry — it’s nothing sinister. Per Viall, the groundbreaking 13th season of “The Bachelorette” won’t be included due to a licensing issue.

“Logistically, and I don’t know why ‘The Bachelor’ doesn’t say just this, but — I don’t know how licensing works — but they don’t have the licensing to have Rachel’s season be a part of the lineup, which is also why you’re not seeing Emily Maynard’s season,” Viall said on his podcast “The Viall Files.” “Clearly that would be easily in one of the greatest of all time, and they’re not airing that. And it’s a licensing issue.”

The former Bachelor and two-time “Bachelorette” runner-up said he learned about this holdup from “multiple reliable sources.” “It could potentially might not be true, but I’m pretty sure it is,” he clarified. “I’ve heard that floated around. So they don’t even have the ability to do that. That being said, even if it was Rachel’s season, it still highlights how white it has been. The optics just don’t look great.”

The first two episodes covered Sean Lowe and Kaitlyn Bristowe, the latter of whom learned she’d be part of the next “Dancing with the Stars” season during her interview with Chris Harrison. Monday’s episode will spotlight Ben Higgins, and the fourth episode will feature JoJo Fletcher. ABC has not announced the rest of the lineup yet.

Given the state of the world and Matt James‘ casting last week as the first black Bachelor, it’s hard not to think TPTB will try to work out a deal to air Lindsay’s season in the remaining six weeks.

“The Bachelor: Greatest Seasons — Ever!” airs Mondays at 8/7c on ABC.