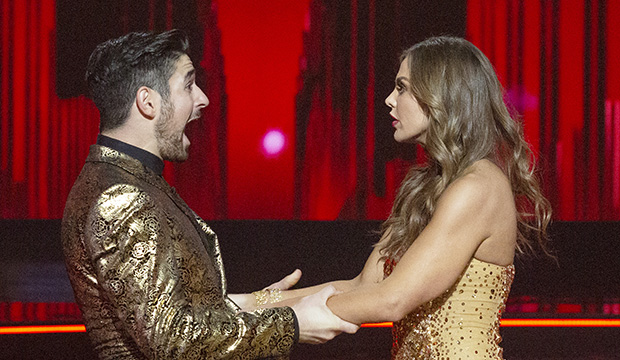 Hannah Brown had some tough, intense moments on “Dancing with the Stars,” and in hindsight, it all makes sense now that we’ve seen her reunion with Peter Weber on “The Bachelor,” which overlapped with her Mirrorball run.

“She is a very honest person and I think she’ll say that it did affect her,” her “Dancing” partner Alan Bersten told “Us Weekly,” adding that at the time he “wasn’t 100 percent aware of everything that was going on.”

The former “Bachelorette,” whose return was teased in a trailer at the end of “Dancing,” appeared in the “Bachelor” season premiere, which was filmed three days after the “Dancing” season premiere in September. The following week, after the second episode of “Dancing,” Brown returned to host a group date, which was when she confessed to Weber that she still had feelings for him and regretted not choosing him. They ultimately went their separate ways.

SEE Hannah Brown thinks it’s ‘wild’ everyone believes she’ll be back on ‘The Bachelor’ (again)… so will she?

Bersten revealed that the beauty queen told him “some things” about her time on “The Bachelor.” “Luckily I was able to help her get through it,” he said. “It was a very real moment and you know, she realized that I was there for her. If she needed anything I could help her own and she could confide in me.”

The pro declined to comment on what everyone wants to know: the status of Brown and Weber’s relationship. “I don’t watch the show enough to know enough about Peter, so I want her to be happy,” he said.

The reigning “Dancing” champs will reunite on Tuesday for a performance at Radio City Music Hall in New York on the “Dancing with the Stars” tour. It’s Brown’s only stop on the tour so far.