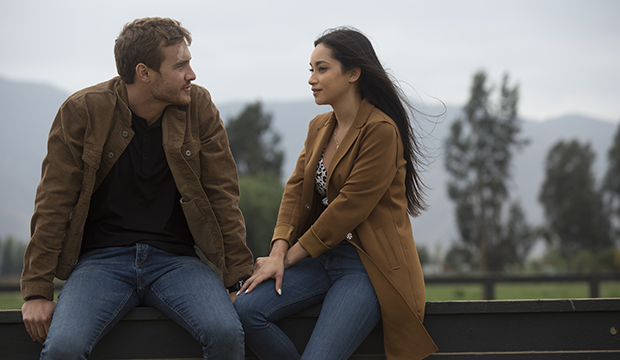 Hometown dates always bring the drama on “The Bachelor,” but there’ll be an extra dosage of it this time.

On Monday’s episode, Peter Weber will meet the clans of his final four, Madison, Hannah Ann, Kelsey and Victoria F., in their respective hometowns. And it’s the last one that doesn’t exactly go as planned. Or maybe it does. As seen the promo below from “Entertainment Weekly,” a mystery woman disrupts Peter and Victoria’s visit to reveal — dun dun dun — Victoria’s secret.

How long have ABC’s promo peeps been waiting for this moment? Congratulations to everyone involved.

It’s unclear who this mystery woman is — literally. Because ABC blurred out her entire body when she makes her grand entrance. They don’t even redact government reports this much. But Peter appears surprised to see her (though that could just be some cutesy editing) and from a close-up, we know she has long blonde hair.

Pilot Pete obviously confronts Victoria about whatever it is this chick says. “She’s brought some stuff to my attention that she thought I should know,” he informs her. “I’m just asking for the truth.”

“Excuse me?” Peter replies. “Excuse you what?” she shoots back. This will end well. But this is what happens when you give someone a rose that you should’ve eliminated, like, six women ago.