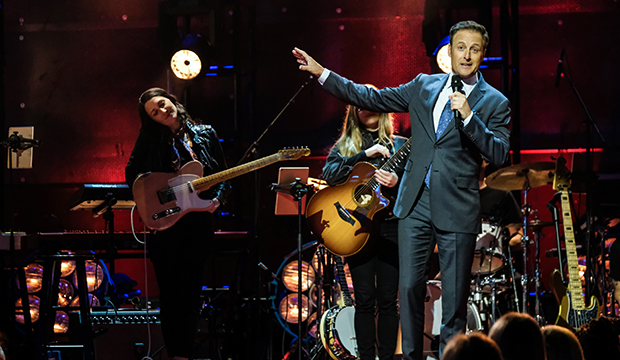 If you thought the Savannah–Julia–Brandon-Sheridan quadrangle last week on “The Bachelor Presents: Listen to Your Heart” was crazy, well,  it’s just getting started.

“I just watched Episode 4, and it is wild,” Chris Harrison told “Entertainment Weekly.” The Brandon and Julia of it all — it is absolutely wild. I really do hope that more and more people start to find this show, because it is so damn good. Watching Julia and Brandon go through their relationship, breakups — it is crazy! I don’t know if we’ve ever had a female character like Julia ever, in the history of any of our shows.”

He added: “People, when they watch Monday night, are going to lose their minds. There are two or three scenes in particular with Brandon, with Sheridan, and with Julia — I stopped and rewound it four times. I was like, ‘There’s no way that just happened.'”

Episode 4 airs Monday and features a couple swap. Naturally, Julia and Brandon will leave their respective partners, Sheridan and Savannah, in the dust to go on a date. Last week, Savannah said she was “shocked” by Julia’s behavior on the show, which included telling Savannah that Brandon wanted to explore things with Julia, calling Savannah “disingenuous,” and insisting that she was over Brandon while constantly talking  about him. Harrison believes Savannah and lovesick Sheridan are being genuine with their feelings, but he’s not so sure about Brulia (that’s what we’re going with, right?).

“I think Brandon and Julia are either using people or being players, I don’t know,” he said. “They’re absolutely amazing to watch, both of them. Maybe they deserve each other! It’s fascinating because Julia is clearly not into Sheridan. Clearly, she just wanted to stay, and now bizarrely, in a hypocritical way, she’s judging Savannah and Brandon for being there for the wrong reasons.”

There are six couples left on the show with varying levels of romantic and musical chemistry. Chris and Bri, who’ve been in sync since the beginning, are “clearly falling for each other,” Harrison noted, adding that Matt and Rudi are also great together. He’s less sure about Katy Perry‘s old “American Idol” crush Trevor, who’s with Jamie (“Who is he? Is he legit, or is he just this reality TV guy that’s trying to get over on everybody?”), and Natascha and Ryan, who linked up after she cozied up to him to get his rose in Week 2 (“They’re great performers, but are they together? Do they have that chemistry?”).

“Clearly there are couples in the house that are not sincere, and there are some people that have a wandering eye and maybe not the best of intentions. And [on Monday’s episode], I go in and push those situations,” Harrison dished. “I will shake things up at the beginning of this next episode, and force some of these conversations. That is going to lead to — I can’t undersell this, it is wild what you’re going to see. I don’t know what people are going to think about Brandon and Julia after this, but just know that you’ll definitely have a very strong opinion.”