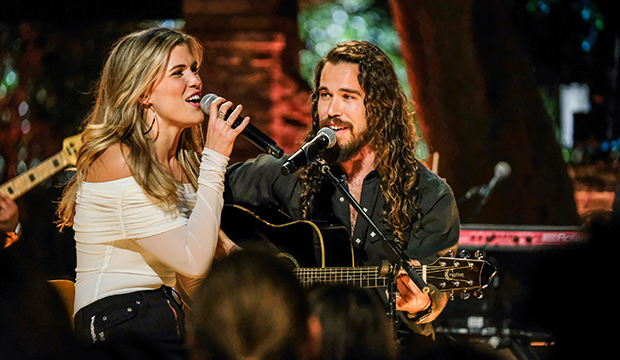 Seven make-or-break live performances turned up the heat on Monday’s “The Bachelor Presents: Listen to Your Heart,” but that doesn’t mean there wasn’t sufficient drama leading up to the big concert.

Chris Harrison got the ball rolling when he arrived at the mansion to share some good news and bad news with the contestants. Good news: 1) No more arrivals and 2) Each couple will perform in front of celebrity judges who would determine the final outcome. The winners of the season would ultimately record new songs together and go on tour as well. Bad news: If anyone hadn’t made a connection with someone, they had to go home.

As expected, panic ensued, particularly for soft-spoken Gabe, who had flown under the radar since the beginning. Although he gave his rose to Ruby last week, he revealed Savannah was the woman with whom he felt a connection, but he needed to be sure since time was running out. Alone with Savannah, Gabe shared his true feelings, but she told him she only felt as if they had developed a friendship, not a romance. Appreciating Gabe’s honesty but knowing her heart belonged to Brandon, Savannah was reduced to tears as Gabe and Ruby immediately left the mansion.

Meanwhile, Julia, chosen by Sheridan last week, was still pining for Brandon, which irritated Savannah. Julia was so emotionally frazzled by Brandon and Savannah’s growing attraction that she couldn’t focus on rehearsing her duet with Sheridan. Even the sound of Brandon and Savannah practicing nearby got under her skin. So, it wasn’t surprising when Julia confronted Savannah for not being genuine in her relationship with Brandon, even calling out their PDA as “disingenuous.” Savannah responded by calling Julia “catty and jealous.” This drama is gonna last a while.

Before the concert, two date cards were in the mix. Danny and Bekah, hoping to find their groove having hit it off on the first night, enjoyed some cool fashions and a photo shoot overseen by designer Rebecca Mink. It was obvious Danny was more into Bekah than she was to him, but she held out hope that the lyrics to their duet would draw their connection closer. Natascha and Ryan enjoyed a Chris Lane concert at the House of Blues with an appearance by his wife, Lauren Bushnell, winner of the 20th season of “The Bachelor.”

At the concert, performed at the mansion, the celebrity judges were engaged “Bachelor” couple JoJo Fletcher and Jordan Rodgers, two-time Grammy winner Jason Mraz and pop star Kesha. In addition to critiquing each performance, they would eliminate the couple who lacked artistic and romantic compatibility.

– Matt and Rudi performed “Fallin’ All in You” by Shawn Mendes, particularly showcasing Rudi’s terrific vocals and sexy, confident stage presence. Both Jason and Kesha dubbed the performance “amazing.”

– Chris and Bri performed “Beyond” by Leon Bridges, displaying a lovely tenderness. JoJo said it “didn’t feel forced” and was “so beautiful.” Jason applauded Chris for being “grounded” in the song, but cautioned Bri about whether or not she was more in love with Chris or the audience.

– Danny and Bekah performed “Ho Hey” by the Lumineers, which seemed to fall flat romantically. JoJo only felt “a strong friendship” had blossomed. However, Jason commended them for their harmony.

– Brandon and Savannah performed “I Want You to Want Me” by Cheap Trick, another misstep. Jordan noticed how Savannah oddly pulled away from Brandon at the end. Kesha simply stated she “didn’t know what was going on romantically.”

– Julia and Sheridan performed “As Long as You Love Me” by the Backstreet Boys, the knockout of the evening and a huge favorite for Jordan, who stood and swayed to the music toward the end. JoJo loved how Sheridan locked eyes with Julia throughout. In fact, Kesha humorously quipped he had “love in his eyeballs.” Jason noted they had a Kenny Rogers–Dolly Parton vibe.

– Natascha and Ryan performed “Stay” by Rihanna, a sultry rendition heightened by Natascha’s impressive vocals and star presence. In fact, Jason praised the “tremendous power in her voice.” JoJo called the number “hot, sexy and passionate” and Kesha said they did an “amazing job.”

– Jamie and Trevor performed “I Could Use a Love Song” by Maren Morris, which almost didn’t come across very smoothly at all due to Jamie’s high anxiety heading into the performance. JoJo said they were “so sweet and beautiful,” while Jason commended them for being inspirational and vulnerable. Kesha noted “as someone who knows how hard it is to have self-love, you should be so proud of yourselves.”

Back inside the mansion for the rose ceremony, the bottom two couples were Brandon and Savannah, and Danny and Bekah. The latter were eliminated, leaving Bekah feeling responsible for what happened. It’s just as well since these two barely got any airtime before this week.

Next week, Brandon stirs the pot by telling Savannah he still has feelings for Julia and the next round of live performances moves to a larger venue featuring celebrity judges, former Bachelorette Rachel Lindsay, and seven-time Grammy winner Toni Braxton.