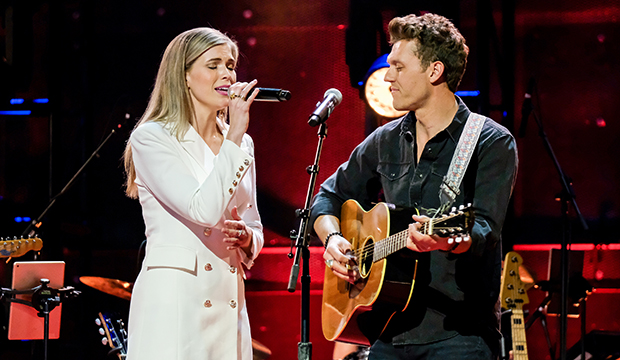 A crucial partner swap and a second round of entertaining live performances bolstered the latest episode of “The Bachelor Presents: Listen to Your Heart.”

Before things fell apart, the six remaining couples were at peace. Savannah even dubbed her relationship with Brandon “harmonious.” But Chris Harrison soon changed everything when he revealed the couples would be put to the ultimate test. In order to see if the relationships they created were solid, the couples would swap partners. The three new couples who ventured on dates were Jamie and Ryan, Chris and Rudi, and Julia and Brandon. Rudi was disappointed because she had yet to go on a date with Matt and could use the additional alone time. She was also jealous of Natascha, who seemed excited to have Matt and Trevor all by herself for some flirty fun in the sun. Sheridan was wary about Julia and Brandon but took the matter in stride knowing their date would ultimately provide much-needed clarity.

Jamie and Ryan, and Chris and Rudi used their dates to solidify their friendships, but Julia and Brandon finally accepted their blossoming love connection. At the legendary Roxy in West Hollywood, they were joined by songwriter Joel Crouse, who oversaw their songwriting assignment and performance. It was evident in their lyrics how much they bonded: “Honesty, for me, need to find a way for me to get some peace/Clarity, mystery, the only way to get there is through you and me.” While Sheridan used his quiet time back at the mansion to create a song with the repeated refrain “coming back,” Julia said she wanted to end up with Brandon.

When she returned, Julia pulled Sheridan aside to break the news. Startled yet understanding, he wished her the best with Brandon, exiting the mansion with everyone genuinely saddened to say goodbye to such a likable guy. On the contrary, Brandon’s chat with Savannah wasn’t as smooth. He said he felt she was 95 percent on board with him, but the remaining 5 percent completely scared him. After telling her they had “a lot of work to do on communication,” she told him she was not going to be a “second choice.” He awkwardly admitted he would choose her instead, but the deed was done. Savannah exited, leaving five couples to take the stage of the Novo Theatre to face guest judges Toni Braxton, Andy Grammer and former Bachelorette Rachel Lindsay and her husband Bryan Abasolo.

Backstage before the concert, Natascha became the villain by telling Julia she was told Brandon would have stayed with Savannah, sending her into an emotional meltdown at the most inopportune moment. At the concert, which offered the contestants a larger venue, last week’s strongest couples proved equally formidable.

– Jamie and Trevor performed “Like I’m Gonna Lose You” by Meghan Trainor and John Legend, a shaky misstep for the duo, especially an incredibly nervous Jamie. Rachel said Trevor should’ve been as passionate as Jamie instead of “cool, calm and collected.”

– Chris and Bri performed “Lover” by Taylor Swift, a tender, heartfelt duet. Toni said “I see the connection” and Rachel noted the song was sung “beautifully” with an intimacy that felt like there was no one else in the audience. Chris and Bri also acknowledged for the first time they were in love with each other.

– Julia and Brandon performed “We Belong” by Pat Benatar, a lackluster rendition. In addition to deeming them “disjointed” in terms of chemistry, Rachel flat-out called it a “karaoke performance.” Toni noted the “tension” between the two as well.

– Natascha and Ryan performed “You Are the Best Thing” by Ray LaMontagne, a knockout duet featuring Natascha’s outstanding vocals. “Your voice is unbelievable, my dear,” said Andy. Toni admired how they “absorbed the stage” and Rachel found them “fun, flirty, sexy.”

Returning backstage prior to the rose ceremony, Julia called out Natascha for telling her about Brandon, labeling her actions “dirty” and “slimy.” But in the end, Julia and Brandon didn’t have what it took to advance. Julia admitted she felt Brandon basically treated their duet like a solo performance and wished she would have chosen Sheridan.

Next week, the contestants board a tour bus bound for Las Vegas where more backstage drama and a possible wedding is in store.