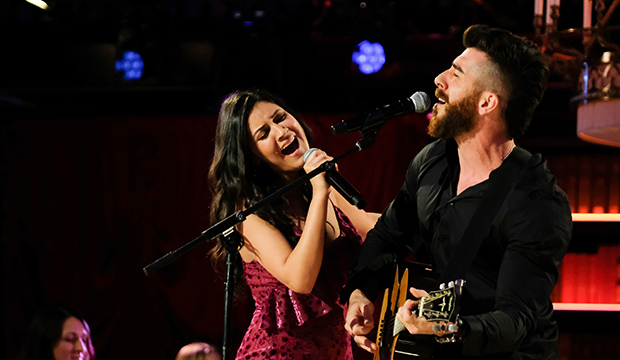 Viva Las Vegas! The four remaining couples hit the road in the semifinals of “The Bachelor Presents: Listen to Your Heart.”

At the mansion, four large tour buses greeted the couples, who basked in the excitement of leaving town for the first time and having the chance to ride in style. The fact that each couple had ample alone time for fun, intimacy and connection was definitely a plus. Bri and Chris, the season’s genuine lovebirds and understated frontrunners, took cute photos while sharing a few tunes. Jamie and Trevor, continuing to grow deeper week after week, did the same. Trevor notably revealed “nothing good can come from being emotionally safe,” an admission that would carry much weight later in the episode.

However, things weren’t as bright for Rudi and Matt, who seemed to be emotionally at odds. Matt acknowledged his hope of finding a life partner, but he hasn’t been as open to love now as he was in his youth. He’s been hurt over time and those wounds haven’t healed. The possibility of falling in love with Rudi is apparent, but it’s still a confusing proposition. In others words, he just wasn’t sure if she’s the woman he’s looking for.

SEE ‘Listen to Your Heart’s’ Sheridan won’t give Julia another chance: ‘I’m not going to be somebody’s second choice’

While Rudi and Matt extended their alone time with a visit to Bottle Tree Ranch on the legendary Route 66, the other three couples arrived together in Vegas at the NoMad Hotel. Bri and Chris received the first date card, which came with the responsibility of serenading a bride and groom at The Little White Chapel with Ben E. King’s “Stand by Me.” Jamie and Trevor’s playful ice skating date at T-Mobile Arena culminated with Trevor finally telling Jamie he loved her. Natascha and Ryan, fading into the background this week, were still emotionally solid nonetheless, steadily building their connection.

Rudi and Matt enjoyed a Shaggy concert at On The Record club, joining him onstage for “It Wasn’t Me.” But when Rudi totally opened up to Matt about her feelings, he didn’t reciprocate, leaving her shocked and disappointed. Matt appreciated her honesty but said he didn’t want to say something that wasn’t true. Rudi acknowledged she and Matt are musically compatible but perhaps not romantically compatible, which is a major issue because she really wants to find love and Matt “has lots of walls up.”

Back at the NoMad, where Lady Gaga performs her most intimate concerts according to Chris Harrison, the semifinals were judged by “Bachelor” alums Arie Luyendyk, Jr. and Lauren Burnham, Grammy-winning Train frontman Pat Monahan, and Ashlee Simpson-Ross and Evan Ross.

– Bri and Chris performed “Can’t Help Falling in Love” by Elvis Presley, a throwback to Episode 2 and another tender moment for the duo. Lauren said they were “super cute” and Ashlee noted how well they “locked eyes and connected.” Pat said they had a “great vibe” and were a “beautiful couple.”

– Jamie and Trevor performed “Just a Kiss” by Lady Antebellum, the strongest performance of the duo this season. Arie liked the fact they were “really playful and innocent.” Ashlee said she was “smiling the whole time.” Pat noticed Jamie was nervous and awkward, but at the same rate, found such expression “real and beautiful.”

– Rudi and Matt closed the show with “Shallow” by Bradley Cooper and Lady Gaga, another winning moment for the couple. Lauren called it an “incredible performance.” Pat praised the number as “really magical.” He also encouraged them to translate their chemistry into original songs.

Backstage prior to the rose ceremony, Natascha was in tears apologizing to Ryan for her mistake but the damage was done. In the end, their onstage disconnect sent them home, but they left the door open for a future relationship.

In next week’s finale, it’s all about Music City as the final three couples depart for Nashville to fulfill their professional and romantic quest while dealing with backstage drama and the arrival of the infamous fantasy suites.