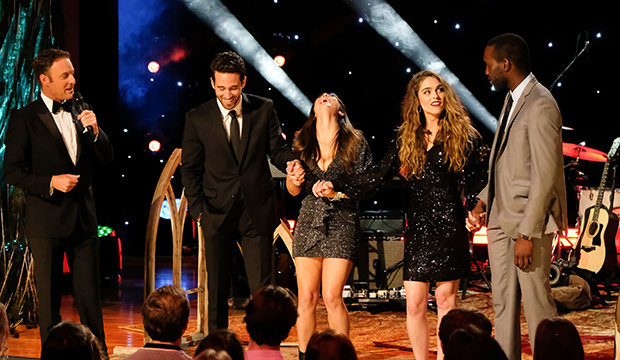 Music City provided the perfect backdrop for the romance, drama, tension, and surprise within the season finale of “The Bachelor Presents: Listen to Your Heart.”

At the outset, Jamie and Trevor, Chris and Bri, and Matt and Rudi excitedly departed Las Vegas for Nashville (Jamie’s hometown) with the hope of turning their love connections into a record deal and more. They were also reminded by Chris Harrison that fantasy suites would come into play on their final dates. Upon arrival at the landmark Hermitage Hotel, which famously counts John F. Kennedy and Richard Nixon among its storied guests, it was time to get serious.

Matt and Rudi, who have had a seesaw relationship from the beginning despite their terrific live performances, were totally on edge. Rudi particularly noticed Matt was stressing out, a troubling sign considering the final performance would occur the next evening. Intimidated by the notion of the fantasy suite and taking into consideration where their relationship stood in comparison to the other couples, Matt felt the moment had arrived to be completely honest. Although he credited singing with Rudi to be the best musical experience of his life and the idea of making music with her would have been incredible, he just didn’t see a future with her. Startled, upset and moved to tears, Rudi nonetheless acknowledged they weren’t where the other two couples were emotionally. She felt what they had onstage was real and authentic but, in the end, it just wasn’t enough. Their goodbye was met with a shocked scream by Jamie, and Chris said he was “sad as hell.”

SEE ‘The Bachelor: Listen to Your Heart’ Week 5 power rankings: Jamie and Trevor rebound in the nick of time

With Matt and Rudi gone, the stakes were raised for the other couples. On their final date, Jamie and Trevor, unwavering in their connection from the beginning, acknowledged their mutual love and respect for each other. Jamie discussed once more how her exes have cheated on her, which led to her struggle with self-love. Trevor thanked her for giving him added confidence along the way and apologized for the moments he put up his emotional walls. Their evening ended with a trip to the fantasy suite.

On the other hand, Chris and Bri weren’t as eager for the fantasy suite. Bri particularly needed more time to get to know Chris on an emotional level with the hope to “preserve what we have.” The next afternoon, while rehearsing for their concert, their connection was weak and off-kilter, the first time the duo wasn’t truly in sync, especially musically.

The final performances were judged by Taye Diggs, Jewel, Rita Wilson, and “The Bachelorette” alums Kaitlyn Bristowe and Jason Tartick.

– Jamie and Trevor offered lovely, tender renditions of “Unchained Melody” by the Righteous Brothers and “Speechless” by Dan + Shay. Rita said they were “unbelievably sweet” and “blended beautifully.” Taye called them “adorable” and “tremendously talented.” Jason admired Trevor’s body language, specifically how he leaned into Jamie during their numbers. Jewel loved them so much she was on the verge of tears.

– Chris and Bri supplied heartwarming, sensitive renditions of “Make You Feel My Love” by Bob Dylan and “Give Me Love” by Ed Sheeran. Rita said they had a “clear connection,” which she found “beautiful, calm and centered.” Taye remarked they were a “beautiful couple” who sang “beautifully together” — so much so he’d pay money to see them perform. Jewel praised Bri for her connection with Chris, which felt genuine. She also commended their “beautiful harmonies.”

Ultimately, Chris and Bri took top honors, a pleasant surprise considering Jamie and Trevor’s frontrunner status. But there’s no denying Chris and Bri’s inherent compatibility, plus their impressive ability to fly under the radar and avoid drama, specifically focusing on strengthening their bond and building their musical chemistry week after week.

After the concert, Chris and Bri boarded a tour bus and found their final roses waiting for them (too bad they can’t tour at all now). Footage of their recording session played over the end credits, which included an acknowledgment they were still a couple eagerly anticipating the release of their debut album.