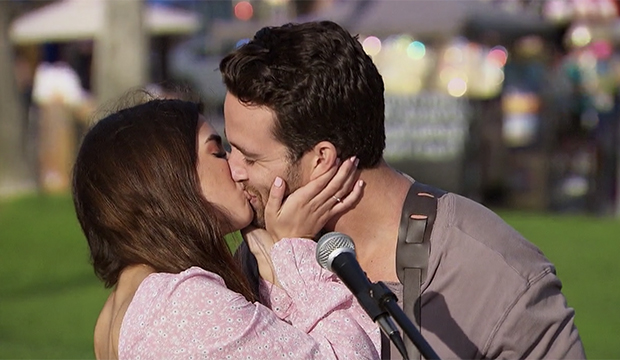 Natascha Bessez came in like a freight train on Monday’s “The Bachelor Presents: Listen to Your Heart” to expose Trevor Holmes‘ alleged cheating ways. The “American Idol” alum would only admit to “emotional cheating” on Natascha’s friend and came clean to his paramour Jamie Gabrielle, who decided to give him a second chance, which seems like a big mistake. Huge, you could say. Especially since the 21-year-old had just cried to the other girls that she’s been cheated on in “every relationship that I’ve ever been in.”

So why did she decide to stick with a guy who just copped to emotionally cheating on his ex-girlfriend? “I was just trying to follow my heart and to go with those feelings,” Jamie told “Entertainment Tonight” (watch below). “And I had, you know, spent the time I had with him, and you know, I, you know, asked my questions, [he] answered, and I decided that I wanted to move on and I believe that people can change.”

Big-ups to the editors for adding a “you know” count meter to her answer because, uh, wow. Not the most articulate explanation, and perhaps now that production is over, and apparently other women have been coming to Reality Steve and Natascha about Trevor’s alleged philandering, Jamie has buyer’s remorse.

She’s also not completely buying Natascha’s “chicks before dicks” explanation of wanting to look out for the other women by calling out Trevor. “I think a lot of it was, you know, very, you know, dramatic, you know, aggressive,” Jamie said of Natascha’s confrontation. “You know, up at this point, you know, Trevor’s this nice guy and sweet and saying all the, you know, right things.”

Hmm, well, maybe that’s why she wanted to send up a flare.

In a separate interview with “ET,” Natascha said she doesn’t care that Jamie didn’t heed her warning about Trevor because she can’t control Jamie, and she only wanted to make sure she had all the intel on the guy before she hitched her wagon to him. “At the end of the day, you can kind of bring the horse to water, but you can’t for it to drink, so it’s like, I’m not here to tell her what to do,” Natascha explained. “Everyone needs to go down their own path and make their own decisions.”

As for what other women have told her about the country-pop crooner since the show has wrapped, Natascha didn’t get into specifics. “There are so many other women he has done this to and it’s shocking to me to see how many women have kind of been caught up in his web,” she said. “You can play some of the other girls, maybe, and win them over with the pretty eyes and the cute smile and the singing to them, but it’s not gonna work on me.”