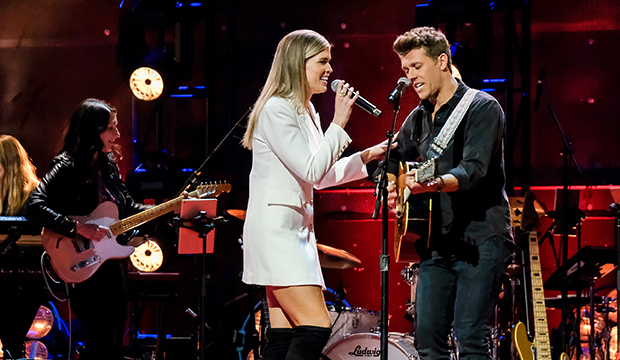 Julia Rae has been trying to make amends since her face-palm-inducing stint on “The Bachelor Presents: Listen to Your Heart,” apologizing to her scorned partner Sheridan Reed and Savannah McKinley, towards whom she “misdirected” her anger. And she’s even forgiven the source of all this drama, Brandon Mills.

“I have spoken to Brandon and I’ve forgiven him,” Julia told “E! News” “I didn’t appreciate the way things went down with him but I wish him well as well.”

The 27-year-old and Brandon continued to flirt and have eyes for each other even as they were partnered with Sheridan and Savannah, respectively. Chris Harrison threw a wrench into things in the fourth episode, announcing a partner swap that, of course, paired Julia and Brandon together. After their date, Julia wanted to pursue things with Brandon, who actually preferred Savannah and basically just wanted to keep playing the field. Both Sheridan and Savannah walked. Julia and Brandon put on a joyless rendition of Pat Benatar‘s “We Belong” (never trust a guy who slanders this classic), and were eliminated.

Julia immediately regretted her decision to choose Brandon over Sheridan, but ironically she says she did so because she didn’t want to leave the show with any regrets about Brandon, whom she’s since called “demeaning, condescending.” “I mean, for me, it was the classic tale of like, I have this amazing, immediate intimate connection with Sheridan. And that was real and it was beautiful,” she explained. “Brandon and I had the first kiss, like we had that chemistry right from the get-go and it was the kind of chemistry that is that spark, that is hard to say goodbye to unless you know that it’s the spark that fizzled. I needed to like, give it that time, which is why I made the decisions that I made.”

The singer was settling into her relationship with Sheridan when Harrison dropped the couple swap curveball. Her successful date with Brandon only left her more “confused.”

“And it made me believe that the spark there had substance to it. Bottom line is that wasn’t the truth. It was just a spark. And it fizzled and it blew up in my face. And that’s clear,” she added. “So, yeah, from my perspective, I was not like, I was hoping to go on a date with Brandon. I thought we were coupled up and I was happy to be with Sheridan and you know, you didn’t get to see Sheridan and [my] rehearse together and how much we really connected on that level. So I had a connection with Sheridan and I feel horrible that it’s not airing just because, for his sake, I think people are assuming I was just holding on to something that wasn’t there, but it really was there.”

Julia has also reached out to Natascha, who told her shortly before her performance that Brandon had said he preferred Savannah, and Julia accused her of sabotage. “I texted her before the show started airing and just to say, you know, of course there was drama. You know, we could expect there to be but I hope you’re doing well and I wish you well,” Julia revealed. “I didn’t hear back from her, but I do wish her well.”

Julia and Sheridan had been in contact after production wrapped, but he’s stopped talking to her since the show premiered, which she hopes one day will change. “That has been my message to him is that I think things could have been different had we not had the circumstances we were facing. So I’m hopeful,” Julia said. “I understand why he probably doesn’t want to talk to me right now. I can totally get that but I’m hopeful for sure.”