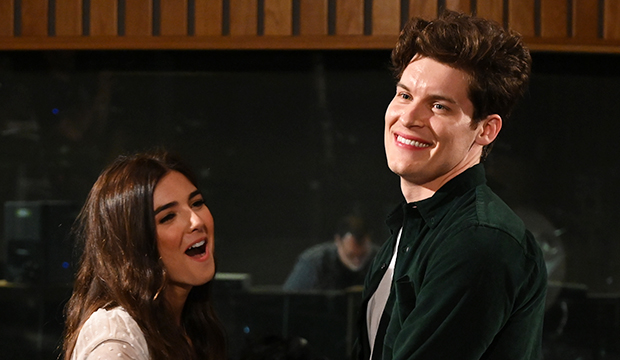 “The Bachelor Presents: Listen to Your Heart,” the latest “Bachelor” spin-off, premiered Monday, featuring aspiring musicians looking for their true love, at least the one they can sing with. Inspired by “A Star is Born” — or more specifically, Lady Gaga and Bradley Cooper‘s Oscar performance of “Shallow” — the show is filled with music, hookups, harmony, and of course, disharmony.

Hosted by Chris Harrison, the series premiere introduced 12 bachelors and eight bachelorettes, with the ladies handing out roses to eight men at the first rose ceremony, sending four dudes home: Jack, Josh, Russell and Michael Todd, the latter of whom looks at women like he is sporting see-through glasses. But like “Bachelor in Paradise,” new pretty people will be added to the mix in the coming weeks to amp up the drama and couples won’t, theoretically, remain static (at least in the beginning).

So who made the best (and worst) first impression? Here are our power rankings after Week 1:

At 40 minutes in, it felt like The Jamie Show. Her love triangle with Jed Wyatt 2.0 Trevor, whom Katy Perry thought was “so hot” when he auditioned for “American Idol,” and the comely Ryan (what a voice!) dominated the episode. She managed a tiny sob of confusion over the guys in one talking head that morphed into a complete sob by the next one. In all fairness, she looked mildly drunk. She hit the hot tub with Trevor and scored a date with Ryan to record John Mayer’s song “Gravity” with Mayer’s producer at Capitol Records. He sounded great, and she was good, and there was another kiss on the top of the Capitol Records building with a view of Hollywood. Sigh, so romantic. But she still looked confused. Re-enter Trevor, who serenaded her with another Mayer tune, “Slow Dancing in a Burning Room,” which is about a breakup, and it was enough for Jamie to give Trevor a rose over Ryan. A preview for the second episode shows a new contestant, a friend of Trevor’s ex, confronting him about allegedly cheating on her pal. This kind of drama means they’ll all definitely be a big storyline going forward.

The upstart wild card is Rudi, who claimed in her intro package that she’s “dated all of L.A.”  This modest (*cough*) ingenue set her sights on faux-hawked Matt. The duo hit the hot tub and all seemed perfect, but not really. After getting the second first date card, Matt slid past his hot tub love and moved on to purple-haired Mel (did he even speak to her?). Needless to say, that left Rudi in tears. And it gave her ample opportunity to whine to the rest of the house about Matt. who is now cast as the house “jerk.”  Shed no tears for the overly confident and highly emotional Rudi — she moved on and actually saved sweet Ryan with a rose, when Jamie tossed him aside for the bearded Trevor.

SEE ‘Listen to Your Heart’ recap: The ‘Bachelor’ spin-off wastes no time giving us a love triangle

Julia is the apple of several men’s eyes. With a blindingly white smile, blonde hair and a beautiful figure, she looks like she walked out of a magazine. Did I mention she works for a non-profit and survived cystic fibrosis? The girl is a walking country song. At least three men swooned — there was bald Josh, ex-Marine Brandon, and hippy guy Sheridan. Ultimately, she gave a rose to Sheridan — after all he wrote her a song.

Utah-born Bree used her luscious eyebrows to entice Chris, a nice guy and talented L.A. soul singer. Actually, the two locked eyes and held hands, and it pretty much looked like a done deal immediately. Call the preacher. Hopefully they’ll sing well together.

New Yorker Mel says she’s shy around men, so she’s picked the perfect show to go on. She gave her rose to Gabe, the resident Christian, cello player — I’m not sure he’ll find religion in this house — so let’s all be glad she saw the light and ditched Matt.

Savannah is the vixen. She’s very confident, does yoga, sports the occasional nose ring and looks like she can lock eyes with any of the boys and snare them into her web. Creepy guy Mike Todd zoomed in on her and she rejected him immediately (something they both got to complain about separately to the rest of the cast). In the end, she set her sights on alpha guy Brandon, who also likes Julia.

These two teamed up — whoever they are. Maybe we’ll find out in another episode.

SEE Let’s look at those cheating accusations against Trevor on ‘The Bachelor: Listen to Your Heart’

Cheyenne didn’t get much airtime, but she pulled a surprise by the end of the episode: She opted to give a rose to “sometimes things just come out of my mouth” Matt.

If TPTB cast Matt to troll Bachelor Nation, then mission accomplished. The dude has never seen “The Bachelor” or heard of Chris Harrison — or to him, Chris Hansen or Chris Hemsworth. And he clearly does not know how reality TV dating works — he literally said, “I have no idea what’s going on.” After Rudi rebuffed his kiss in the hot tub the first night, he inexplicably picked Mel for his date instead of Rudi, who had expressed interest in going and was under the impression that Matt had promised to take her. Matt and Mel’s “date” — a backyard concert by the Plain White T’s — was a bust and he tried crawling back to Rudi, who was having none of it. Pray for him going forward.