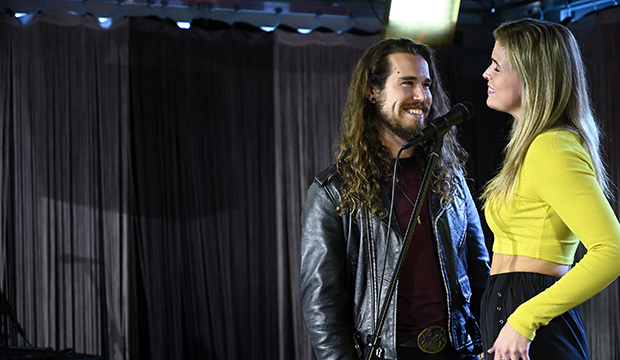 Episode 2 of ABC’s “The Bachelor Presents: Listen to your Heart” pulled on more guitar strings than a Coachella concert. Three women joined the cast, but only one of them, Natascha, made a lasting impression, when she confronted Trevor about allegedly cheating on her friend. The eight guys had the rose-giving power this week, sending three ladies, home: Cheyenne, new girl Mariana and Mel. Poor Mel flooded the limo with tears as she sped home. More candidates for eHarmony.

Here are our power rankings of the remaining couples after Week 2:

The story begins with Jamie (again) — I know it’s just the second episode, but aren’t we tired of her yet? This show is only six episodes long (at the moment), and Jamie’s been the A plot of a third of the season. The 21- year old brunette beauty from Nashville received a date card and decided to get cozy with “American Idol” Trevor. The duo went off to Venice Beach to perform on the strand (California’s version of the boardwalk.) They sang a cover of Little Big Town’s “Girl Crush” and Jamie swooned and announced in her talking head that “I could see myself being in a relationship with him.” And then they landed in a hot tub playing tongue hockey. But along comes Natasha, who had told the entire house that Trevor allegedly cheated on her friend. When she talks to him, he’d only cop to “emotional cheating,” and she made him tell Jamie, who was distraught but decided to trust Present Trevor and not Past Trevor. Sigh. Like ’em or hate ’em, these two are the power couple of “Listen to Your Heart” and are driving the bulk of the drama.

Natascha is one of the new girls. Our first glimpse of this lovely is of her platform shoes hitting the pavement in front of the house. She immediately declared she’s “looking for a husband” and that she’s “not a diva, but that she really is a diva.” Can we say trouble in a tube top? And she delivered. Natascha can’t wait to tell anyone who will listen that Trevor dated her girlfriend and cheated on her: “I wouldn’t want to see someone who does that to my girlfriend to do it to other girlfriends.”

As Jamie announced that she was on “the best date ever,” Natasha demanded to speak to Trevor privately. The housemates told Jamie all, and her toothy smile turned into a tearful flash flood as she sobbed that she’s been “cheated on in every relationship.” Meanwhile, Trevor pussyfooted around direct answers regarding his ex as Natasha quizzed him like a witness in a “Law and Order” episode. Trevor admitted he lied to his ex, but never physically cheated. OK, that was in the past, so mind your own bee’s wax, Natascha!

Barracuda Natascha then took the time to coil her hands around sweet musician Ryan, calling him Clark Kent. He seemed skeptical of Natascha until she announced she likes “nerds.” And with four sentences of small talk, they locked lips and didn’t come up for air, and he gave her a rose. I don’t see this duo at all. Natascha wanted/needed a rose and she went for the easy prey. Gotta respect the hustle, though.

L.A. crooner Chris and Utah girl Bri seem to be singing the same song (at least metaphorically) when they hit it off last week, and Bri got down on bended knee to ask him for a date this week. They rolled off to the Guitar Center (which is empty and closed) to play instruments and sing stream-of-consciousness songs to one another. He revealed he’s never had a connection “like this one.” Will someone please start drafting the wedding announcements for these two?

So we’ve got our first love quadrangle. The long-haired, lovesick Sheridan got a date card and zoomed right in on Julia, whom he is crushing on in an overly needy way. He wants to lock down the ever elusive yet flirtatious Julia. They go on a date to an iHeartMedia radio show, where they are asked to sing. As the singing commenced, Sheridan tried to hold Julia’s hand, but she pulled a Melania and pushed it away. In the end, Julia gave him a juicy kiss. By the way, who was playing the invisible piano? After their musical fun, Julia told Sheridan that she’s been “talking to Brandon,” and she “wants to still have those conversations” as she “figures things out.” Sheridan is crestfallen. Somebody give this boy a teddy bear and tell him to move on.

SEE ‘Listen to Your Heart’ Episode 2 recap: Before he cheats? Natascha stirs the pot

Savannah got a date card and batted her eyes at Brandon, stating, “I’ve never asked a man on a date.”  Brandon eagerly accepted, much to the dismay of Mel, who falls into hysterics because she’s into him too. Girl, get in line. I don’t get ex-Marine Brandon — he’s OK, I mean, nothing wrong, but certainly nothing to get gooey about (and haven’t these people all met like two days ago?). Savannah and Brandon, looking very Ken and Barbie, went to the famed Dresden Room to hear married cabaret couple Marty and Elayne, who have been performing together there for 37 years. Our singles performed Peggy Lee‘s “Fever” and kissed.

But when they returned, Julia threw herself down next to Brandon and tried to trash Savannah in her passive-aggressive way, calling her out as “being hard to read.” Julia, why are you a beeyotch this week? I liked you last week. Brandon told Julia he wrote her off and now he cares about Savannah, but that didn’t stop Brulia from swallowing each other’s tongues. This would’ve been far more interesting had it ended with Brandon giving a rose to Julia, but of course he went with Savannah, while Sheridan naively stuck with Julia.

Poor guy. After such a strong start and date last week, he got tossed to the curb by his Jamie but was saved by a rose from Rudi. And now, no one really seemed to care about the John Mayer wannabe until they realized that the guys do the choosing this week and Ryan’s rose was up for grabs. He got wooed by Natascha and Rudi, who moved in for a fast kiss and called him Harry Potter. Imagine being called both Clark Kent and Harry Potter in a matter of minutes. He chose Natascha after their make-out sesh, but this was just a rose of convenience.

Rudi did her part to have two roses in her back pocket, cozying up to Ryan, which didn’t work as well. As she pondered being rose-less, she moved on to Matt (again), who had done her wrong last week when he made out with her but asked Mel for a date. After some uncomfortable moments of flirtation, she accidentally slapped Matt and they kissed. He even stops to say, “That was intense.” May be next week they’ll be wearing leather.

Who are these people? Will they ever get any screen time besides the requisite rose ceremony minutes? Danny and Bekah paired up again, while Gabe chose Ruby, another new contestant.