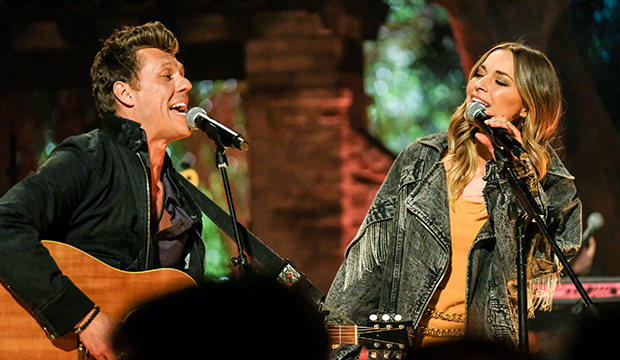 “The Bachelor Presents: Listen to Your Heart” finally got down to business in Episode 3 as the singing portion kicked off. At this point everyone is coupled up, but the tears and drama continued.

Celebrity judges Kesha, Jason Mraz, and Bachelor Nation’s JoJo Fletcher and Jordan Rodgers critiqued the seven couples on their musical chemistry and romantic chemistry before one was eliminated, with Chris Harrison presiding over the rose ceremony (it was kinda weird).

The unlucky duo who got axed was Danny and Bekah, which you could see coming from a mile away. They finally got airtime, thanks to getting a date card, to the home a celebrity stylist, and then we got to see why they haven’t been getting airtime. They sealed their fate when Bekah awkwardly rejected a second kiss from Danny after their performance of “Ho Hey” by the Lumineers. The weakest performance was from Brandon and Savannah, but Brandon, Savannah and Julia provide the soap to this opera, so they have to stay. Poor Bekah, she cried in the car.  Go audition for “American Idol” or “The Voice” — you have talent!

So who is making beautiful music together so far? Here are our power rankings for the remaining six pairs.

1. Julia and Sheridan
2. Savannah and Brandon

No matter what you think about this quartet, they are the source of all the action right now, thanks to the love triangle between nose-ringed yoga instructor Savannah, who is “all in” with ex-Marine Brandon, who had given her his rose but who also likes the blonde, jealous and sneaky Julia. Or does he? Is he just playing them both? Julia stirred the pot by having some girl talk, insisting she had sparks with Brandon. Brandon reassured Savannah that he spoke to Julia and that she blindsided him, causing “a whirlwind of chaos in his heart.” “I want to move forward with you, or at least give it a shot,” he told Savannah. It ended with a hug, while Julia gave Savannah the stink eye. Brandon totally knows what he’s doing here.

SEE ‘Listen to Your Heart’ Episode 3 recap: This is… ‘American Idol’ meets ‘The Bachelor’

Meanwhile, Gabe announced his interest in Savannah. Wait, what? Who is Gabe? Oh yeah, he’s with pink-haired Ruby, whom he’s not into, and he made a play for Savannah. Alas, Savannah stared blankly at him, and he decided to pack it up and leave, which meant Ruby, with no partner, had to take her car ride to match.com or the next “Voice” audition, muttering, “I wasn’t given a fair deal.” You were Ruby; nobody was interested. Two down, and the singing competition hadn’t even started yet.

Savannah and Brandon performed Cheap Trick‘s “I Want You to Want Me,” but the judges weren’t feeling their chemistry. Julia mumbled that “they’re fake as hell” and stood off to the side looking pleased with herself. Somebody slap her. But Julia’s duet of the Backstreet Boys‘ “As Long as You Love Me” with lovesick Sheridan earned raves from the judges and a resting bitch face from Brandon. Kesha saw “love in his eyeballs” and Mraz said they have a “Kenny and Dolly thing.” Instead of being gracious about her triumph, Julia took another swipe at Savannah in her confessional: “It must be super painful for Savannah right now.”

Savannah and Brandon landed in the bottom two, but you knew there wasn’t a chanced they were getting cut. All of this mess — and the departure of two contestants — because of one dude. This is the “Bachelor” we know.

Big blonde Natascha and boy toy Ryan earned a date to watch and perform with Chris Lane (and his wife, former “Bachelor” winner Lauren Bushnell). This was a last-ditch coupling last week after Natascha hustled to get Ryan’s rose, so they’re, as Tim Gunn would say, trying to “make it work.” Ryan is “vibing on Natascha,” and Natascha loved singing live with Chris Lane — wait, shouldn’t she love singing with Ryan? These two did a standout performance of Rihanna‘s “Stay.” Ryan started at the keyboards and was very slick, and she looked every inch the star in an amazing one-shouldered black gown. They sounded hot. Natascha wailed those lyrics and hit the hell out of every note.  They slow-danced and looked like they needed to reserve a room in the midst of their vocalizing. The judges agreed and said they were amazing. Mraz was especially taken with Natascha’s voice, but he was far less impressed by Ryan, to whom he told might not make it as big as Natascha. Ouch.

When loud, annoying Rudi and “things just come out of my mouth” Matt sang “Fallin’ All in You” by Shawn Mendes, they sounded good. Rudi has a nice stage presence and guitarist Matt was great, and they looked like a couple. Kesha called their performance a “12.”

Singing “Beyond” by Leon Bridges, they shined, or should I say he shined. He’s more talented than her, but together they look pretty and he sang this song to her. Bri looked nervous, but she slowly rose to the occasion, and it all ended with a big fat kiss.  JoJo said, “You did not take your eyes off of her.” Jordan advised, “Hold on to that one,” while Mraz called their harmonizing “beautiful.”

After dominating the first two episodes, this pair had a quiet episode and a misfire performing Maren Morris‘ “I Could Use a Love Song.” She was nervous and sounded chirpy, while he appeared self-assured and natural. JoJo felt they sounded “real,” and Jamie made a post-song speech about self-love that felt forced. Kesha reassured her by telling her she should “feel proud of yourself right now.”