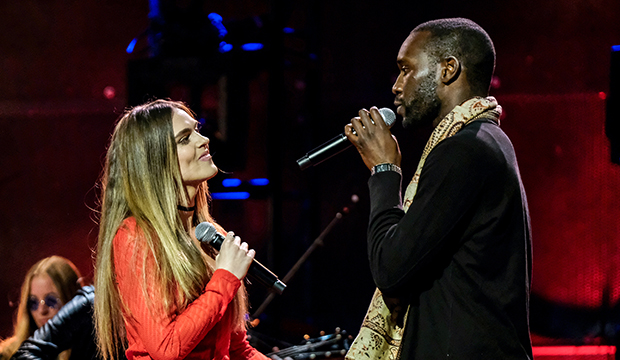 No matter what happens in the remaining two episodes of “The Bachelor Presents: Listen to Your Heart,” it’ll be hard to top the insanity of Episode 4 that saw two couples depart and not even in their original pairings.

After a temporary couple swap for dates, Julia and Brandon informed Sheridan and Savannah that they had feelings for each other, causing their OG partners to walk (though Brandon was his wishy-washy self and said he preferred Savannah to Julia). Julia and Brandon’s union was short-lived, however, as their lackluster rendition of Pat Benatar‘s “We Belong” proved that they do not belong to the light or the thunder or together. The judges, Toni Braxton, Andy Grammer, and “The Bachelorette’s” Rachel Lindsay and Bryan Abasolo, were unimpressed — Braxton felt “tension” between them; Rachel called it a “karaoke performance.” They were axed, and Julia and cried that she was “done with Brandon,” whom she blamed for treating it like a solo performance. Buh-bye, Julia, you made poor decisions. Hey, Sheridan, any thoughts you’d like to add?

Heading into the semifinals, there are four couples left, though we don’t blame you if completely forgot about them after the Brulia brouhaha. Here are our power rankings after Week 4.

Chris and Bri look sweetly romantic and real performing “Lover” by Taylor Swift. They have had chemistry from the beginning, and it is nice to see that has not waned at all. Braxton stated, “I see love and a connection.” Rachel seconded it, saying “You were singing to each other like nobody was in the audience.” Grammer called them “fantastic.” And Bri told the audience afterwards that she whispered “I love you” in Chris’ ear after the song. Aw, our first “I love you” of the season. Just give them the prize already!

These two bring it with a great rendition of “You Are the Best Thing” by Ray LaMontagne. They have the best presence and energy compared to the others, and she’s got the singing chops and another nice dress! They make good use of the stage and close the performance near the judges and the audience. Braxton said they “engaged the entire audience.” Grammer loves Natascha’s voice. And Rachel felt their relationship was “fun and flirty.” Just wow.

Natascha is probably the most polarizing contestant left. She shook up the house when she arrived and promptly confronted Trevor about his alleged transgressions two weeks ago, and just before Julia hit the stage with Brandon, she told her that Brandon had said he would’ve stayed with Savannah. Was she just doing the right thing or was she trying to throw off jealous Julia before her big performance? Julia was certain it was the latter and blamed Natascha for sabotaging her performance. Either way, the offstage drama never affects Natascha’s performances (like it does, ahem, some other people) and she can definitely sing.

From the moment he opened his mouth to croon Chris Stapleton‘s “Tennessee Whiskey,” Matt owned this song, but he looked like he was singing it to himself. Rudi also sounded great, but they seemed a bit locked in their own worlds. I don’t buy their chemistry, but they both can sing, and the judges thought differently. Rachel felt “chemistry” and gave them a thumbs up.  Grammer said their vocals were strong despite nerves, and Braxton wanted Matt to bring up “the sexy” with his guitar.

Remember when Jamie and Trevor dominated the first two episodes and were busking on boardwalks? Good times. Less good have been their official stage performances. Jamie had another gigantic case of nerves (she started crying backstage during Rudi and Matt’s performance because they were so good) as she and a confident Trevor sang “Like I’m Gonna Lose You” by Meghan Trainor and John Legend. Brunette Barbie and her Ken look TV perfect, but I’m not sure they hit the right notes together. She kept putting her hand on him and it looked forced. Grammer felt their nerves, while Rachel told Trevor he could’ve matched her passion. Braxton threw Jamie a life vest by telling her to be more confident (that’s the second judge to tell her that; I wish she’d listen.) She whined and cried after the performance about “ruining it.”

Who will we hate next week? May be Natascha? But she’s so darned talented. We shall see.