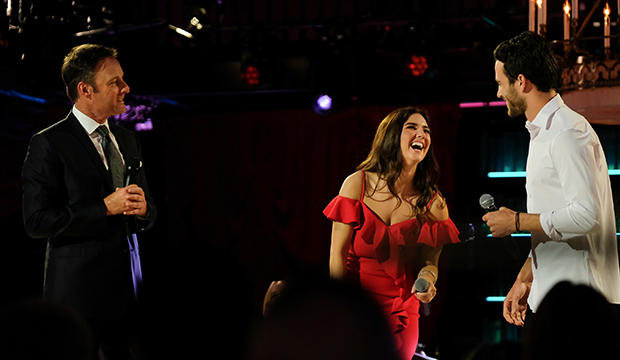 The final four couples headed to Las Vegas for the semifinals on “The Bachelor Presents: Listen to Your Heart.” It was time to ratchet up the sin in sin city, and this quartet didn’t disappoint, for better or worse.

After two weeks of killer performances, Natascha and Ryan were probably doomed the second their date took place at a “trashing plant,” where they squashed large pieces of metal. Who comes up with these date ideas? Natascha moved in on poor Ryan, stating, “We have a good thing going.” A great tee-up for their disastrous performance.

Singing “Perfect” by Ed Sheeran and Beyoncé, Natascha looked nervous and messed up when she handed Ryan the mic while he was still strumming his guitar. And she forgot her lyrics. Oy. (But I did love your dress, Natascha. Again.) Cutie pie Ryan can sing through a tornado and he knows how to play, and despite her confusion, he didn’t miss a beat. The judges — Arie and Lauren Luyendyk, Ashlee Simpson-Ross and Evan Ross, and Train frontman Pat Monahan — were all stone-faced. So it came as no surprise when they were eliminated. OK, they had an off night, but I really thought this duo would be there until the end. Sad to see them go. They were the most entertaining performers even though they really didn’t look like they clicked as a couple. Who will be “evil” next week with Natascha gone? Alas, the drama seems to be disappearing. One can only hope that Ryan and Natascha will be scooped up and dropped onto a stage somewhere.

So who has the edge going into the final? Here are our power rankings after Week 5.

SEE ‘Listen to Your Heart’ Episode 5 recap: Rudi and Matt splinter, but they’re far from the shallow now

Within the first 15 minutes, Rudi and Matt went rogue and made a stopover at a small hotel (that didn’t take long). Rudi is falling in love and she can’t wait to tell him. I was literally screaming, “Don’t do it, you still have to perform!” He sighed and called her “courageous.” Ugh, wrong answer, Matt. And she burst into tears. They unpacked all their emotion and frustration while performing “Shallow” by Lady Gaga and Bradley Cooper — very apt. Matt has a great voice and so does she, and vocally they match each other so well (can somebody say record contract?). Although I’m not sure about their love connection, they both know how to send a message through a lyric. When she sang “or do you need more,” it sounded like she was making an honest statement. Evan looked like he was going to jump out of his nose ring at one point. GO RUDI! The judges basically called them the real deal. I think they may surprise us all, which is why I positioned them as the No. 1 couple. (Sometimes love is slow, folks, even on a reality show.)

Jamie and Trevor played tongue hockey at an ice rink and revealed their feelings. “This is the coolest day in my life,” he said. It is an ice rink, Trevor. Watch out, Bri and Chris, you guys may have some real competition in the “love” department. Trevor was excited to see Jamie looking and acting confident (for once) for their performance. The duo sang “Just a Kiss” by Lady Antebellum. Jamie finally came out of her shell and killed it, and Trevor always delivers. These two really sparked, and I think she was even blushing during their song. Ashlee and Evan “felt their love,” as did Arie and Lauren. Pat adored her “awkwardness.” They’re into each other, they finally sang well together, and I do see a possibility of a win for them.

SEE ‘Listen to Your Heart’s’ Matt knows his response to Rudi’s love declaration was terrible: ‘That’s the worst thing I’ve ever said in my life’

Chris and Bri’s date brought them to Vegas’ infamous Little White Chapel to sing Ben E. King‘s “Stand by Me” at someone else’s wedding. Subtle. For the judges, the No. 1 love duo from Day 1 sang “Can’t Help Falling in Love” by Elvis Presley. Chris seems to embody the lyrics of every song he sings. They sang to one another like they were the only people in the room, and the pheromones were flying. They certainly harmonize well, but he’s the stronger performer. Lauren found them “super cute” and Arie added that he felt “her heart coming out of her eyes.” Pat “loved” it, and Evan and Ashlee agreed. I’ve been feeling that they’re the winners from the start — they found the love, they have the voices — but there is something missing. He’s got “it,” but Bri is just there — she doesn’t twinkle, and they feel too obvious to win. And Natascha and Ryan just proved that you can have the goods, but one mistake and it’s over.

Next week the show moves to Nashville — and if the promos are any indication it looks like a flood of tears and drama are coming. Can’t wait.