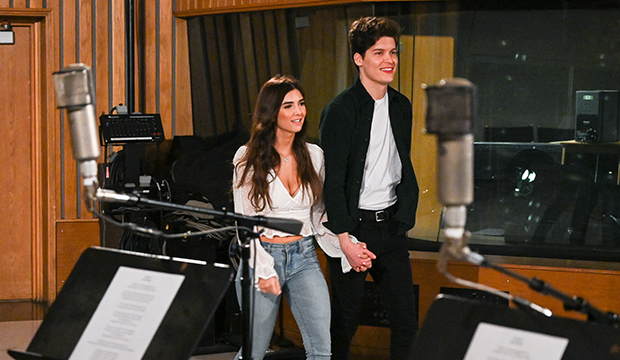 “The Bachelor Presents: Listen to Your Heart,” the latest spinoff of “The Bachelor” franchise, struck the right chord in its entertaining debut, faithfully delivering on its promise to conjure the feel-good musical vibes of Bradley Cooper and Lady Gaga’s 2018 remake of “A Star is Born” (at least the first third of it) within the context of the franchise’s resilient framework.

Hoping to find their soul mates in a shared love of music, 20 contestants (12 men, eight women) of pleasantly diverse musical backgrounds gathered to discover they had to be a part of a committed couple before the first rose ceremony. In fact, the women were given the power to hand out roses, meaning four men would ultimately be sent home, a la “Bachelor in Paradise.” Standouts among the cast included: 21-year-old pop/country singer Jamie of Nashville; 25-year-old acoustic/pop singer Savannah of Nashville; 24-year-old R&B/pop singer Rudi of San Antonio; 27-year-old pop singer Julia of Wayne, Pa.; 28-year-old pop/jazz singer Ryan of Dearborn Heights, Mich.; 32-year-old neo soul singer Matt of Milford, Conn.; 27-year-old pop/soul singer Sheridan of Austin, Texas; and 29-year-old country/pop singer Trevor of Thousand Oaks, Calif., who also made it to the top 25 of “American Idol” in 2018 and was a favorite of “Idol” judge Katy Perry.

The opening night meet-and-greet didn’t waste time bringing potential couples into focus. Jamie, bubbly with an admittedly dismal dating record, entered the mansion first and was quickly smitten with Ryan, a handsome blend of John Mayer and Tom Everett Scott, who entered soon after. This duo seemed like a perfect match until Jamie locked eyes on Trevor, who was also attracted to her thus setting up a pivotal love triangle that would fuel much of the episode’s drama and romance.

Elsewhere, Matt, who had never seen “The Bachelor,” found a kindred spirit in feisty Rudi, but was startled by her reluctance to kiss him in the pool. Savannah, cool and confident, thought she might like bad boy Michael Todd, a singer/songwriter from Atwater, Calif., who admired her blue-green eyes, but his attempt to kiss her resulted in her given him a hilariously awkward dodge. The evening ended with Jamie and Trevor growing closer over kisses in the pool.

The next day, Ryan got the first date card. Knowing Jamie had eyes for Trevor, he chose her in the hope of resetting their initial spark. Inside the studios of Capitol Records, they were greeted by Grammy-nominated producer John Alagía, who has worked with a slew of great artists including John Mayer. Ryan and Jamie were invited to sing Mayer’s song “Gravity” on Frank Sinatra’s microphones. At first, Jamie was uncomfortable with the song’s style, a far cry from what she’s used to in the pop/country vein, but Ryan, a terrific guitarist, eventually raised the key to suit her tone, elevating their compatibility. By and large, their tender, wistful and beautifully sung duet was the episode’s finest moment, giving credence to what this series intends to deliver going forward. And in a peak “Bachelor” editing move, as Ryan and Jamie turned up the heat inside the studio and outside on the roof, the camera momentarily switched to Trevor looking solemn back at the mansion.

SEE Meet the cast of ‘The Bachelor Presents: Listen to Your Heart’

The second date card went to Matt, who was torn between Rudi and Mel, a spunky 27-year-old indie rock singer from Brooklyn, New York. Oddly choosing to hurriedly interview both before making his decision, he ultimately chose Mel, which infuriated Rudi, who assumed their connection was solid based on his insistence that he was actually interested in going on a date with her. Matt and Mel’s date consisted of a backyard private concert featuring the Plain White T’s.

Meanwhile, Julia, friendly and easygoing, became linked to Sheridan and 31-year-old pop/country singer Josh of Nashville, while Chris, a relatively quiet 30-year-old soul singer from Los Angeles, found a spark with 28-year-old pop singer Bri of Provo, Utah. Eventually, Mel had second thoughts about Matt and became more attracted to 28-year-old soul/folk singer Gabe of Houston, leaving Matt to try and salvage his relationship with Rudi. As expected, Rudi grilled him about his indecision and was absolutely ready to move on without him. Having been scolded to the hilt, Matt was fully prepared to go home.