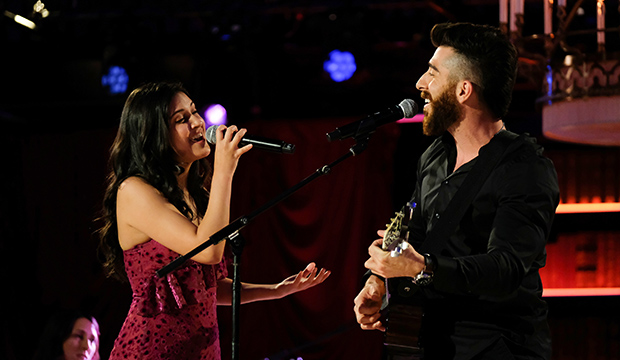 We know Lady Gaga is all caught up on “The Bachelor,” but the jury’s out on whether she’s tuned in to “The Bachelor Presents: Listen to Your Heart,” aka the show that exists because of her and Bradley Cooper‘s steamy performance of “Shallow” at the Oscars. The hit was finally performed on Monday’s semifinals by Rudi Gutierrez and Matt Ranaudo, but Rudi is not expecting the singer to check it out — mostly because she wouldn’t be able to handle it if she did.

“No way [will she weigh in on my performance], because if she did, I would just, like, drop to the floor,” Rudi told “Entertainment Tonight.” “I don’t even want to think about a possibility of that, because, like, that freaks me out. Just the possibility of it… I love her so much.”

The couple nailed their rendition, with Rudi hitting Gaga’s signature signature wail and all, earning raves from all the judges and a spot in the final three. Rudi was on the “highest high” following the performance, which came shortly after Matt, by his own admission, gave one of the worst responses ever to Rudi saying she was falling for him. But their flawless performance made Rudi feel like they were Gaga and Cooper. “I felt it,” she said of their onstage chemistry.

But that high looks to be short-lived, as the preview for the finale forecasted more drama for the pair and, well, every couple. “I think this next episode on Monday is gonna be a little rough,” Rudi warned. “A lot of tears. Some good tears, some bad tears. And a lot of really good moments too.”

SEE ‘Listen to Your Heart’s’ Matt knows his response to Rudi’s love declaration was terrible: ‘That’s the worst thing I’ve ever said in my life’

Matt had previously teased that the finale will be an “emotional journey.” “I would say it get the most emotional it’s gonna get,” he said.

Look, as long as it’s not the ending of “A Star Is Born,” we’re probably good.