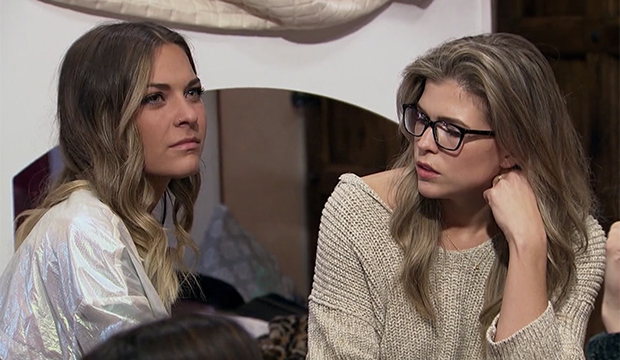 The Jamie–Trevor–Ryan love triangle on “The Bachelor Presents: Listen to Your Heart” fizzled out before it every really took off, with Jamie choosing Trevor and Natascha swooping in in Week 2 to bag Ryan’s rose. But the show’s love quadrangle definitely isn’t ending any time soon.

On Monday’s episode, Brandon Mills, who for some reason a bunch of ladies are into, told Julia Rae that he would like to keep exploring things with her, and that he gave his rose to Savannah McKinley because he knew she was assured one from Sheridan Reed. Julia shared this with Savannah, who was, naturally, upset, and Brandon had to damage control there. But then things spiraled — or really, Julia spiraled — and she accused Savannah of being “disingenuous” in her PDA with Brandon and kept insisting that she was over him and was into Sheridan almost every time she was on camera. The lady doth protest too much. Savannah called Julia “catty and jealous,” which will be the closest the “Bachelor” franchise will get to having Beyonce on the show.

In an interview with “Entertainment Tonight,” Savannah says she was taken aback by Julia’s behavior and that entire conversation, which, honestly, you know homegirl knew what she was doing by telling Savannah all of that.

SEE ‘Listen to Your Heart’ Episode 3 recap: This is… ‘American Idol’ meets ‘The Bachelor’

The 25-year-old noted Julia’s contradictory claims on the show regarding Brandon. “The entire situation was so difficult because Julia was telling me one thing. She said, ‘That was it, I have absolutely no feelings for Brandon, nothing going on for Brandon,'” Savannah said. “And then it all comes out that she’s sobbing because she doesn’t know what to do or, ‘Oh, I just went through the rose ceremony with Sheridan but I still have feelings for Brandon.'”

Savannah has sympathy for Sheridan, in particular, who’s been a lovestruck puppy when it comes to Julia and was, as Savannah puts it, “blinded by love.” “You can see it all over his face, that guy wears his heart on his sleeve, and he just adores her. And so it’s hard to know that she was putting on this front,” she added.

Her feelings about Brandon — with whom she performed a lackluster rendition of Cheap Trick‘s “I Want You to Want Me” (fitting since we already established how Brandon is basically Bianca from “10 Things I Hate About You,” which features Letters to Cleo‘s cover of the song) — are tad more complicated. Savannah is disappointed that he wasn’t honest with her about his feelings for Julia like she was with him about her platonic feelings for Gabe, who left the show, thus also eliminating Ruby, when Savannah chose Brandon (Gabe, dude, just stick it out and see where things go with Ruby?).

“There’s definitely feelings of betrayal. … I’m a very empathetic person, so I try to have a clear head about all of this and know that this was difficult. But I think if I could’ve just had an honest moment with him. … ‘Why all the sudden are we having all this come out that you have feelings for Julia and you can’t choose? You told me you chose me,'” Savannah said, adding that Brandon is a “smooth talker” who knows “how to get what he wants with the women.” Ya think? “”I think Brandon could have done a better job considering me, and I think Julia could have done a better job staying in her lane.”

Savannah and Brandon’s tepid performance and chemistry put them in the bottom two, but they were spared as Danny and Bekah were axed, which means there’s for sure more drama to come between her, Julia, Brandon (and poor Sheridan).

“Every feeling, everything that you see, every tear, every smile — it was all genuine and it was real and so much of that was wrapped around Brandon,” she shared. “I think that there was a lot of things that were tough in our relationship. I think that he was caught up in a lot more webs — whether he spun them or not — he just got caught up in a lot more webs than I realized. But I knew every time that I was with Brandon, that he meant what he said. So, we’ll see how all of that unravels.”