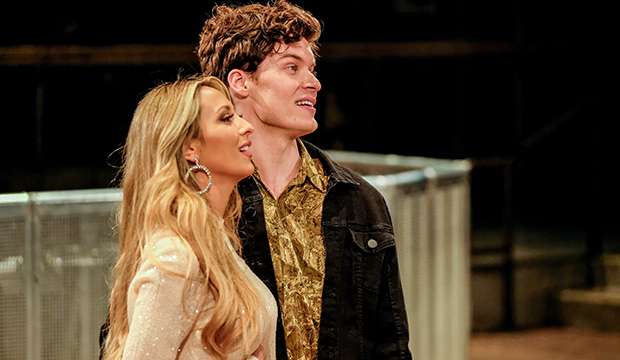 Natascha Bessez spent so much of the second episode of “The Bachelor Presents: Listen to Your Heart” trying to expose Trevor Holmes‘ past infidelity that it almost felt like she forgot there was some important business to take care of: ensure you get a rose to stick around. She did just that, flirting up a storm and making out with Ryan Neal, the last “single” guy, to earn his rose. And now they’ll go on their first date on Monday’s episode.

The new couple head to the House of Blues in Anaheim, Calif., to take in a concert by country star Chris Lane. Lane, oh, just so happens, to be married to Lauren Bushnell Lane, who won Season 20 of “The Bachelor,” starring Ben Higgins; the pair split after a year. What are the chances?! (*sarcasm font*) Lane brings the pair on stage to perform “Big, Big Plans,” a song he wrote to propose to Bushnell Lane, who also comes on stage, last year.

“It’s a really exciting feeling that this really could be our future,” Bessez says of the performance in the sneak peek, via “People” (watch below). “Chris and his wife Lauren look like they adore each other and that they respect each other and they’re a team.”

And she has one big prediction about her and Ryan: “I feel like Ryan and I are on our way to really being a strong team. I see a huge change in our relationship.”

Sure, but, uh, judging by that awkward swaying and less-than-enthusiastic singing, it doesn’t seem like he’s all that into it. Plus, Ryan’s probably still reeling from losing Jamie Gabrielle to Trevor and then realizing that all those ladies last week only wanted him because for his rose (and not because he allegedly looks like Clark Kent and Harry Potter). And is Natascha actually into him herself? Or is she overcompensating for hustling for his rose? She is a reality TV veteran.

The third episode will also feature stage performances by the couples for the first time. JoJo Fletcher, Jordan Rodgers, Kesha and Jason Mraz will be guest judges.