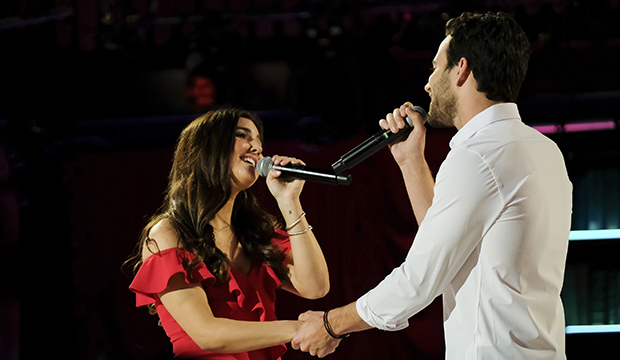 “The Bachelor Presents: Listen to Your Heart” was inspired by Lady Gaga and Bradley Cooper‘s performance of “Shallow” at the Oscars. After four episodes, we’ll finally hear the song on the show. Props for the restraint.

One of the four remaining couples will perform the Oscar-winning ballad on Monday’s semifinals. Make your guesses now as to who it’d be. Bri and Chris‘ off-the-charts chemistry could give Gaga and BCoop’s a run for its money, but an Elvis Presley tune is also on the docket, so they could easily get assigned “Can’t Help Falling in Love” — especially since the Las Vegas-set episode features the pair serenading a newly married couple at A Little White Wedding Chapel with Ben E. King‘s “Stand By Me.”

Ed Sheeran and Beyonce‘s’ “Perfect” and a Lady Antebellum song will also be performed.

Bri and Chris’ trip to the chapel is the most romantic (and high-pressured) date, especially compared to Natascha and Ryan, who will be, per ABC, “using heavy construction equipment to crush cars.” Sure. Jamie and Trevor will head to an ice skating rick, where, as seen in the preview, Jamie will drop the “L” word on him and he doesn’t exactly reciprocate. Rudi and Matt get to sing backup for Shaggy on “It Wasn’t Me,” and she, bolstered by Jamie’s courage, will also declare her feelings for her man, which also doesn’t go as planned.