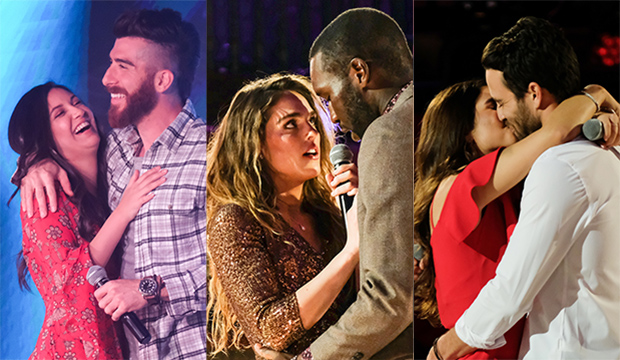 After just five weeks, a cheating accusation, the most dramatic couple swap of all time, and the most awkward non-reciprocal “I love you” of all time, “The Bachelor Presents: Listen to Your Heart” will wrap up its first season and crown its inaugural singing lovebirds on Monday.

The final three — Rudi and Matt, Bri and Chris, and Jamie and Trevor — head to Nashville, where they’re informed of the existence of the fantasy suite. “The news is devastating to one, welcomed by another and declined by the other duo,” ABC teases.

Each couple will perform two songs for the judges, Taye Diggs, Rita Wilson, Jewel, and Bachelor Nation’s Kaitlyn Bristowe and Jason Tartick. Some of the artists they’ll cover are the Righteous Brothers, Dan + Shay, Ed Sheeran and Bob Dylan.

So who will win? Stop reading now if you don’t want to know.

SEE ‘Listen to Your Heart’s’ Matt knows his response to Rudi’s love declaration was terrible: ‘That’s the worst thing I’ve ever said in my whole life’

According to spoiler king Reality Steve, who reported the scoop after the finale was filmed in February, your very first “Listen to Your Heart” champs are… Bri and Chris. Not really surprising here. They had the romantic chemistry from the get-go — we did get the first “I love you” from them — and have been able to translate that into their performances. Are they the best performers of the entire group? No, but they are the best of both worlds. They’ve also been drama-free all season, so they might seem “boring,” but it’s honestly refreshing.

The runners-up, per Reality Steve, were Jamie and Trevor, which means Rudi and Matt were third. This is slightly surprising since the latter are way better performers and recovered from Matt’s verbal diarrhea last week to put on a fantastic performance of “Shallow.” But the preview did tease some more drama on the way for them, as did Rudi and Matt themselves.

Jamie and Trevor had been squeaking by despite some so-so performances, handicapped by Jamie’s nerves, but she rebounded for the semifinals, so perhaps that continued here (or you know, may Rudi and Matt flopped as hard as Natascha and Ryan last week).