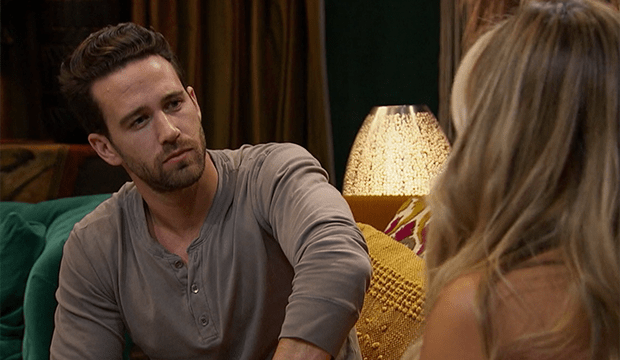 Kudos to “The Bachelor Presents: Listen to Your Heart” on waiting until the second week to bring in a pal of Trevor Holmes‘ ex-girlfriend as a cast member. As seen in the preview last week, the woman, Natascha, ups the drama quotient by about 129 percent when she asks Trevor about allegedly cheating on her friend. And in a sneak peek of Monday’s episode (watch below), via “Entertainment Tonight,” we see that she wastes absolutely no time confronting him.

“I got here today, and uh, I know you,” Natascha tells a stunned Trevor by the fire pit, surrounded by a bunch of other castmates, after they meet and hug.

“I feel like you look familiar, but I can’t figure out how I know you,” he says.

“Well, let me remind you. You wanna go have a chat?” she bluntly replies. Man, you can’t write this stuff.

Trevor attempts to buy some time, but Natascha ain’t having it. “I’d like to chat now, to be honest,” she cuts him off.

Live shot of everyone else:

Inside the mansion, Natascha gets right to it, telling him she’s friends with his ex and that said ex “told me that you lied to her and that you cheated on her. Is it not what happened? The lying and the cheating — did that happen?”

“No,” Trevor states with a smirk. Not helping your case, dude.

“OK, OK, OK, we don’t have to get into the minor details,” Trevor says. “I told you that, yes, there was some emotional cheating.”

“Was there lying?” Natascha asks as a distressed Trevor hangs his head.

As we previously noted, Trevor’s ex is Sierra Nielsen, who was his girlfriend at the time of his infamous “American Idol” audition in 2018, during which Katy Perry called him “so hot.” Trevor confirmed last week that Sierra is the ex in question. The then-couple appeared on “Good Morning America” to discuss Perry’s flirting and broke up months later. In September 2018, Sierra referenced a breakup without naming any names, revealing that she was trying to recover from “his betrayals.”

Of the cheating accusations, Trevor said last week, “Looking back, I wasn’t ready for a relationship at the time. I had some personal growing to do and I needed that time to be alone and really do that soul-searching and figure myself out. And I think you have to trust the timing of your life.”

Whatever did happen between Trevor and Sierra, safe to say that Trevor and Natascha won’t be pairing up to make beautiful music together.