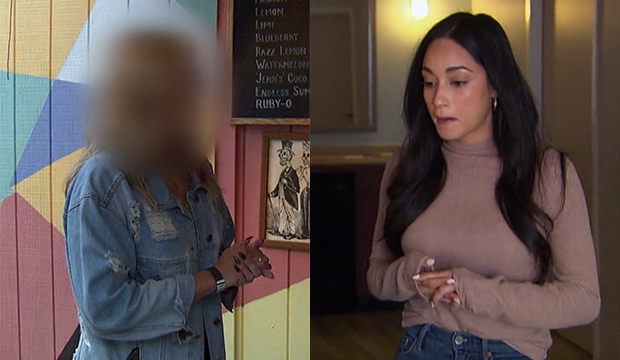 “The Bachelor” gave us a hometown date for the ages on Monday, when Peter Weber‘s ex-girlfriend Merissa Pence — face completely blurred for maximum effect — popped up to warn him about Victoria Fuller and her past, including that she has allegedly broken up “many relationships.”

Merissa and Victoria did not see each other the day that was filmed in the fall, but they definitely have crossed paths since then in their hometown of Virginia Beach, Virginia, and it was not all water under the bridge. (Shocking, we know.)

“We had a semi-confrontation at one of the local bars here a couple weekends after she got back from ‘The Bachelor,’” Merissa told “Entertainment Tonight.” “[Victoria yelled] ‘You’re a f—ing loser!’ Those words do not hurt me, and I was confident in what I did. … I don’t take any offense to that. It is what it is, but I think that’s just her way of expressing that she’s upset, which is fine.”

The women met a couple years ago after Merissa, who dated Peter for five months in 2012, moved back to Virginia Beach and ran in the same social circles. They were never friends themselves, and Victoria rubbed Merissa the wrong way from the start when she threatened to slash Merissa’s tires for hanging out with her ex-boyfriend. The red flags went up for Merissa after she says Victoria acted like she was all that when she was cast on “The Bachelor.”

During her chat with Peter, Merissa told him that Victoria was a homewrecker, which obviously Victoria was not pleased about when Peter confronted her about it later that day. Reiterating that she had no ulterior motive in talking to Peter, Merissa has reached out to the pilot since the show but has not yet heard back from him.

“I wasn’t there to get Peter back or open up this new conversation,” she stated. “I just really wanted him to know her as a person and [say], ‘Please do not propose to her, because this is not going to work out for you.'”

Despite the drama — and the fact that Peter never met Victoria’s family on their hometown date — Victoria still received a rose from him after they had a chat the next day, during which Peter somehow apologized to her. He instead eliminated Kelsey, leaving Victoria, Madison and Hannah Ann as the final three. Needless to say, Merissa is not Team Victoria, but she’s all aboard the Madison train.

“I connect with her on a real level. I feel like she’s a real girl, she’s there for the right reasons and I just appreciate her not getting involved in the drama,” she said of Maidson. “I feel so bad for Peter, because I feel like there’s been so much drama, whether it involves him or not. I hope at the end of this show, he at least has found someone that is perfect for him. And if he didn’t, I know he will.”

'The Bachelor' episode 7 recap: Matt quickly whittles down to his final 4

'The Bachelor' episode 6 recap: Ruffled feathers and the arrival of Heather

'The Bachelor' episode 2 recap: Victoria is your evil queen, er, villain of the season