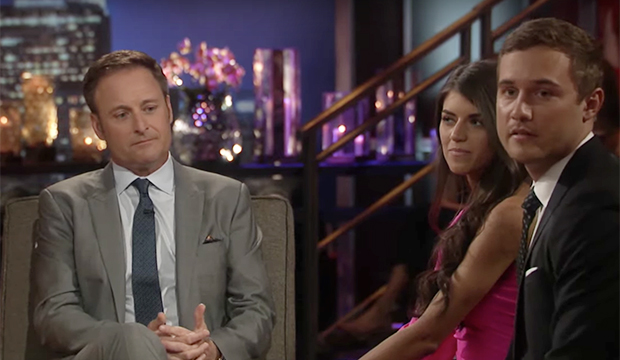 Y’all are gonna wanna sit down for this, Bachelor Nation: Peter Weber and Madison Prewett were “never really back together,” a source who works on “The Bachelor” told “People.” Truly a game-changing plot twist.

“They just realized they couldn’t make it work,” the show source added of their breakup, which was announced last Thursday, just two days after the most dramatic “Bachelor” finale of all time, making them the quickest post-finale split ever.

The, uh, revelation, if you can call it that, that the couple never fully reconciled matches with Reality Steve’s dispatches during the season. Though he eventually did manage to spoil the previously unspoiled ending, one of the things the spoiler guru could never fully lock down was the status of Peter and Madison’s relationship. All that was revealed was that Madison left before the final rose ceremony, Peter proposed to Hannah Ann Sluss, then dumped her when he realized he wasn’t over Madison, and then had been working on reconciling with Madison. “Maybe they are solid and he’s gonna propose tomorrow night,” he wrote. “Maybe not. That’s gonna be what we’re all waiting for.”

SEE Peter and Madison break up just 2 days after the ‘Bachelor’ finale, so congratulations to Barb

The idea that Peter was going to propose is downright hilarious now, given all the craziness that went down on “After the Final Rose,” aka Barb going scorched earth on them. During Barb’s takedown, the only thing Peter said in defense was that he loves Madison, and “that should be enough.” Welp.

In a post on Wednesday, Reality Steve called out the the dubiousness of their commitment to their relationship. “We can debate all day until we’re blue in the face on who was more serious about the relationship than the other, but I don’t think we’ll ever get a true answer to that since only those two know. But you can’t convince me that sitting up there on the stage 8 days ago saying you love each other and ‘that should be all that matters,’ then two days later deciding it’s already over, that something doesn’t smell right,” he wrote. “Either they were never in love to begin with and were just trying to convince themselves they were, or, what happened Tuesday night of Peter choosing to be with Madison wasn’t supposed to happen to begin with and took everyone by surprise. The email I got after the finale that I shared with you last week suggests the latter.”

Another source told the magazine that Madison is ” very saddened” by the situation. “She cares for Peter and wanted to work through their challenges,” the insider shared. “But it just got too difficult and seemed like everything was against them.” Read: Everything = Barb. Though Madison didn’t apologize to Barb on “After the Final Rose” for being late to meet the family in Australia — blame that Peter also ought to share, if you ask Chris Harrison — the source said the 23-year-old “feels badly if she ever unintentionally hurt the Weber family.”

As for Peter, he’s single and trying to figure out his next step, according to the show source. “Everything that Peter went through on ‘The Bachelor’ really hit him hard. He is aware that people think he made a ton of mistakes,” the source said. “But he never wanted to hurt anyone and he truly hoped he’d find a relationship that would last.”