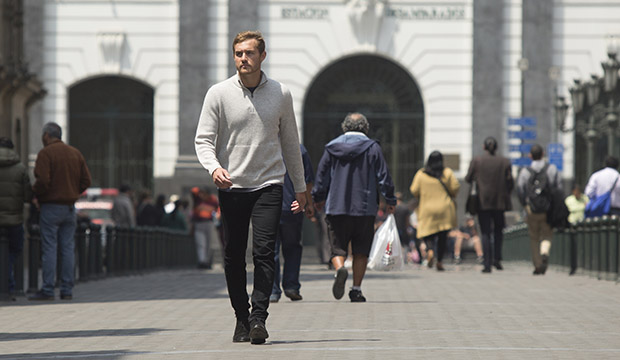 Unlike most seasons of “The Bachelor” (and “The Bachelorette”), no one knows how Season 24 ends — not even Reality Steve! Such uncertainty has shaken Bachelor Nation, and everyone’s overanalyzing the cast’s Venmo accounts for clues as to who gets the final rose. The latest theory, as posited on Reddit, is that Peter Weber does not end up not one of the ladies, but rather with “Bachelor” producer Julie LaPlaca. Among the “evidence”? They spent New Year’s Eve together.

Asked about the rumor, Rob Mills, ABC’s SVP of alternative series, specials and late-night programming, further fanned the flames by neither confirming or denying. (But what good executive worth their salt would?) “Well, I hate to get in the way of a good rumor, so I’m not going to confirm or deny about whether he ends up with a producer!” Mills told “Entertainment Tonight.” “I don’t know how we’d ever top that though! But it is crazy.”

Reality Steve has already shot down the Peter-Julie speculation, calling it “garbage” on Saturday on Twitter.

Gonna make this as simple as possible for every1 since it’s all I get asked now: It’s garbage, there is absolutely nothing to this, it makes zero sense & people are desperately grasping at straws bc the ending isn’t out yet.

Hope that clears things up. https://t.co/ZFjdFSDJSz

In a post on Tuesday, Reality Steve further debunked the “asinine” speculation, pointing out that there is a very legitimate reason for the two to be together if you think about how reality shows and press tours work.

“Peter and Julie have pics together post-show. Great. They’re they are in Times Square on New Year’s Eve together. Yeah. SHE’S HIS PRODUCER. Did that person bother to think even for a second that Julie travels with Peter ANY TIME he does media rounds?” he wrote. “And he was in NY for the ABC Rockin’ Eve show like EVERY ‘Bachelor’ has been on NYE for the past I don’t know how many seasons to promote the ‘Bachelor’ because it premieres within a week after NYE. Peter spends more time with Julie than he does ANY of the women this season. Probably 10x more. She goes everywhere with him.”

Mills did offer a small tease about who Peter ultimately chooses — or perhaps not choose? “What we’ve seen about the finale over the years is that the ‘finale’ is really on that night when the show goes live,” he said. “There’s a lot of craziness, it’s a roller coaster, but I would say even now the roller coaster hasn’t ended, and it won’t end until after ‘After the Final Rose.'”

This would support another popular theory that Peter did not pick his betrothed when the finale was taped but will do so live on “After the Final Rose,” which would explain why there are no spoilers about the winner.

Peter whittled down his group to four on Monday’s episode — Hannah Ann, Kelsey, Madison and Victoria F. — for the hometown dates.