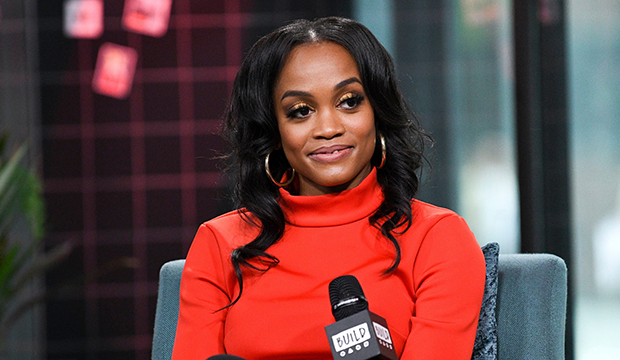 Rachel Lindsay says she’s heard from a “Bachelor” executive producer since she’s renewed her plea for the franchise to fix its race problem the past few weeks, but she’s taking it with a grain of salt until she sees actual changes.

“In the past week, yes. I have heard from an executive producer just saying that they hear me and they want to make changes,” the Season 13 Bachelorette told “Entertainment Tonight” (watch below). “This isn’t my first rodeo with hearing an executive producer say, ‘We want to make some changes.’ I believe you want to, or I used to believe you want to. But I’m not seeing anything. I’ve been affiliated with this franchise for almost four years and I hear you. But I’m not seeing any action behind those words.”

Lindsay, the only black lead in 40 total seasons of “The Bachelor” and “The Bachelorette,” clarified that she has not heard from anyone since her Monday blog post that further excoriated the franchise for its shortcomings and laid out suggestions for a “diversity makeover.” The same day, the franchise’s retrospective series “The Bachelor: Greatest Seasons — Ever!” premiered and a fan petition launched demanding, among other anti-racism changes, a black lead for the 25th season of “The Bachelor.”

ABC and Warner Bros., which produces the franchise, have yet to comment, which “baffles” Lindsay.

“To date, they haven’t made any type of statement, which baffles me,” she pointed out. “So many companies have made statements in regard to what is happening in our country, and I thought for sure we’ll get [a statement] before [‘The Greatest Seasons — Ever!’] airs, and we haven’t.”

In recent interviews and podcasts, the attorney has said she would cut ties with “The Bachelor” if it doesn’t make any changes, as she’s “embarrassed” to be associated with a franchise that doesn’t acknowledge its systemic racism. Lindsay co-hosts the “Bachelor Happy Hour” podcast with fellow Bachelorette Becca Kufrin that is produced by Warner Bros., so she is still under contract at the moment.

“I have talked to some producers and I have said that I’ll leave if they don’t make changes. So it’s conditional. So I’m waiting to see what changes are made,” she shared. “I’m trying to be patient and wait and give them an opportunity to respond and see how they respond, and then I’ll make my decision after that.”

She expects a statement within “the next week,” but notes that “it will be at least a couple months before we hear anything about a lead of color being announced.”

When she’s brought up race issues in the past with producers, Lindsay revealed she was always told that “everyone wants diversity [but] it just doesn’t work out.” “It’s the answer I’m given,” she said. “I have heard them say, ‘You’ve seen it more diverse,’ and it’s great for that first picture, that first night when everyone’s standing in the mansion and you can see all the different races and ethnicities represented in that one picture. But if you don’t cast a lead who is genuinely into dating outside of their race and open to a new experience and has done it before then, by the time you get to the second half of the season, it looks nothing like that picture.”

The 35-year-old asserts that it all comes down to business for TPTB and a “if it ain’t broke, don’t fix it” mentality. The franchise  has continued to feed its fan base what it’s used to, aka white leads, and Lindsay notes that her season scored lower ratings, which likely deterred producers from casting another lead of color after her.

“I’m just not sure that what we’re measuring it against as far as what makes a good lead, other than the fact that you want to give the audience what it is that they want — which are white leads,” she said. “You’re either on the wrong side or the right side. And the franchise, to me, has been on the wrong side for 18 years. For 40 seasons. So, are you going to step on to the right side at this point? That’s what I am trying to put the pressure on them to do. I’m hoping also that the audience will as well.”